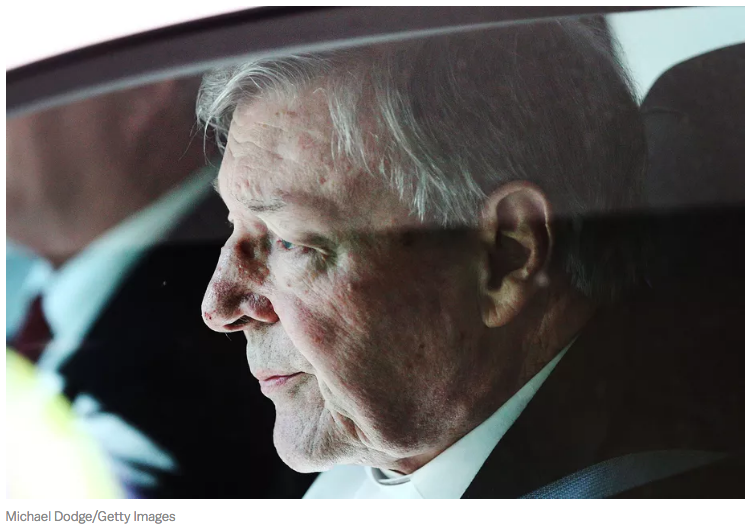 The third-highest-ranking official in the Vatican is due to stand trial in Australia for several charges of sex abuse. Cardinal George Pell, who was charged last summer with multiple counts of child sex abuse, will face trial in Melbourne after two months of hearings. Pell, 76, has pleaded not guilty to all counts and has surrendered his passport in anticipation of trial.

Because of Australia’s strict standards on reporting court cases, the identities of Pell’s accusers and their number have not been made public. We know only that the charge is for what is known as “historical sexual offenses” — and therefore took place decades ago — and that the charges brought to trial are only some of the initial charges made against the cardinal.

In recent years, Pell has become the center of a media firestorm in his native Australia regarding whether he had been involved in covering up the abuses of others during his prior tenure as archbishop of Melbourne.

In 2016, before any specific accusations against him surfaced, Pell became involved in the wider scandal when he testified to an Australian commission on clerical child abuse. Speaking via videolink from Rome, he expressed regret for not having done more to protect victims of abuse. Subsequently, he came under fire for having inadequately responded to one case of confirmed abuse in his former Australian diocese, Ballarat, a district with one of the most checkered histories of sexual abuse, including a pedophile ring. (As archbishop of Sydney, Pell had been accused in 2002 of sexual misconduct involving an incident with a minor at a summer camp in 1961 but was cleared of all wrongdoing.)

Since late 2016, renewed rumors have swirled of Pell’s personal involvement in sexual abuse. In 2016, Australian investigators met with Pell in Rome to discuss a number of historical allegations. A collection of statements, including allegations that Pell had touched children inappropriately while swimming with them, was passed to Australian prosecutors in February 2017.

And an Australian Senate motion called for Pell to return to give evidence to investigators (he later did so via videolink, citing ill health). In May, a new book about Pell by journalist Louise Milligan came out, reporting allegations that Pell had abused a number of children on several occasions.

Pell is the most senior member of the Catholic Church to be involved in what has now been decades of scandal over allegations of systematic child abuse in the ’60s, ’70s and early ’80s, by Catholic clergy worldwide.

The sex abuse scandal reached the public eye in the 1990s after a series of television documentaries, including 1994’s Suffer the Children, brought the issue to light in Ireland. Later, it spread, with reports of widespread clerical abuse affecting thousands of children in dozens of countries, including the United States and Australia. One Australian study undertaken by a royal commission found that 7 percent of Australian priests were accused of child abuse between 1950 and 2009.

In addition to the allegations of abuse, there have been allegations of a Vatican cover-up. Several reports have found that senior church officials rarely took action after allegations of abuse, systematically transferring accused offenders into different parishes, where they would continue to come into contact with children, rather than seeking legal recourse or punishment.

Often, Vatican officials chose to see offenses in the religious category of sin — sexual misconduct caused by temptation, to be addressed through prayer and repentance, with the focus on the abuser’s state of mind — rather than through the lens of crime or systematic abuse. As Thomas Reese puts it in the National Catholic Reporter, “It was thought that if the priest was moved away from ‘temptation’ to another parish, the problem would be solved. Instead, many priests found new children to victimize and abused again. In other words, the bishops responded pastorally to the priest but ignored the risk to children.”

In practice, this led to a culture of enabling. In one of the most shocking revelations to come out of the Ireland cases, the Dublin archdiocese had in 1987 taken out an insurance policy to cover expected future compensation claims by victims.

Ballarat, Australia, where Pell was an episcopal vicar for education between 1973 and 1984, was one of the worst hotbeds of abuse, with sexual abuse by both priests and nuns rife at St. Alipius Parish Primary School, called “a pedophile’s paradise and a child’s nightmare” by Australian television.

Many critical of both Pope John Paul II and Benedict XVI’s sluggish pace in addressing the issue were hopeful that Pope Francis would prove a far more fervent ally when it came to contending with the church’s legacy of sex abuse. And in his initial years as pope, Francis seemed willing to address these concerns.

In 2013, shortly after becoming pope, he announced the creation of a Vatican committee to fight sex abuse in the church, and in 2014 he named eight people, including abuse survivor Marie Collins, to the committee. In April 2014, he also publicly apologized for the Vatican’s actions, breaking a trend of Vatican obfuscation. He said, “It is personal, moral damage carried out by men of the Church.” Francis insisted “the Church will not take one step backward” in dealing with the issue of child sexual abuse. He also announced that any priest who had enabled abuse by moving an abuser to another parish should resign.

But progress has been slow. The pope scrapped one of the main proposals of the Vatican’s committee — that bishops accused of covering up abuse be subject to a tribunal — after bishops objected. And in early 2016, Collins stepped down from the committee, citing the Vatican’s “shameful” resistance to redressing its wrongs. The final straw, she said, was the Vatican’s reluctance to comply with a recommendation that all correspondence from those identifying themselves as victims of abuse should receive a response.

Earlier this year, Pope Francis caused another controversy when he implied that those condemning Chilean Bishop Juan Barros for allegedly knowing about and enabling child abuse were lying. (Francis later apologized.)

But the pope’s continued involvement with Cardinal Pell has proved fodder for critics who say he is not doing enough to redress the Vatican’s wrongs.

Pope Francis has not yet personally commented on Pell’s trial.