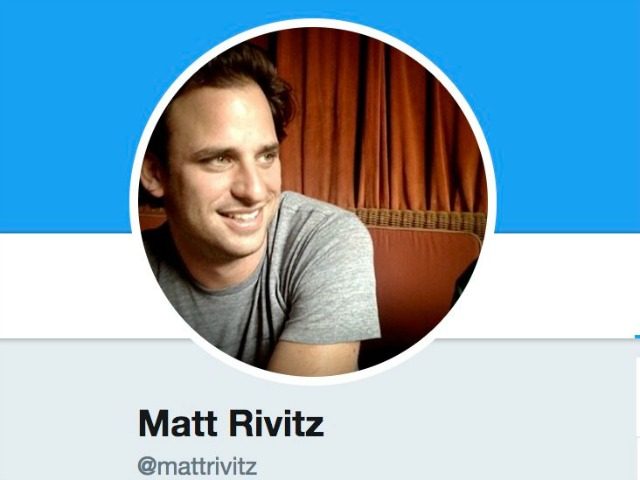 A Monday report revealed Matt Rivitz, a San Francisco-based ad executive, as the founder of Sleeping Giants, the anonymous leftist group that organizes social media mobs in an effort to silence conservative voices.

According to the Daily Caller News Foundation’s (DCNF) Peter Hasson, Rivitz’s identity as the until-now anonymous founder is confirmed by clues left in Rivitz’s media interviews and social media posts by people in his “social and professional circles.”

The group’s modus operandi is consistent throughout its campaigns: use social media in cooperation with other well-funded left-wing groups like Media Matters for America and Think Progress to urge their followers to contact advertisers en masse – expressing their outrage that companies dare advertise with conservatives – until the companies relent and pull their ads. Equally consistent is their goal in organizing these social media mobs: pressure corporate America to blacklist conservative audiences.

Sleeping Giants’ first crusade was to drive Breitbart News from the web, starting in 2016. Despite being unable to do so, the group has branched out into threatening the advertisers of other leading voices on the right like Fox News’s Sean Hannity and Bill O’Reilly. Sleeping Giants also sought to bring pressure on CEOs to drop out of President Donald Trump’s consultative councils. More recently, the group joined with teenage anti-gun rights campaigner David Hogg to try to push conservative icon Laura Ingraham off the FM airwaves and cable news.

Rivitz, throughout the time he has been organizing boycotts against advertisers, worked in the ad industry. According to his AdForum and AdAge profiles, Rivitz has done copywriting work with Goodby Silverstein & Partners, a major San Francisco ad firm, and Wieden + Kennedy, a Portland-based advertising powerhouse, although he does not appear to be employed at either agency at the moment.

The DCNF reports that Rivitz’s wife, Blythe Lang, was also an enthusiastic supporter of Sleeping Giants’ work, her Facebook “likes” of the group’s early work being one of the breadcrumbs leading to Rivitz.

Responding to his unmasking Monday, Rivitz used the Sleeping Giants Twitter account, which is verified by Twitter, to insist he is “super proud” of his work and that he only sought anonymity for more than a year and a half because he wanted “to stay anonymous to keep this about the mission rather than the individuals involved:

Last night, @peterjhasson from @dailycaller decided to publish my name as well as the names of my family & friends.

And, curiously, a tweet I wrote to Ikea customer service. Which is weird. pic.twitter.com/DVhJt1p90L

I am super proud of what we’ve built here and the fact that there are now hundreds of thousands of people across the world who have joined together to make hate unprofitable.

This has never been about me or us. It’s about you. Thanks for your support. The mission continues.

In the past, however, the Sleeping Giants team has presented a very different explanation as to their reasons for anonymity:

We’re anonymous because we have jobs that pay our salaries and we don’t think they need to be wrapped up in this. Why are you anonymous?

A Sleeping Giants spokesman gave a very similar explanation for anonymity in a September 2017 Washington Post profile. “The spokesman says some leading members are employed by companies that might not take kindly to their employees engaging in a prolonged activist effort,” the Post’s Paul Farhi wrote.

In January 2017, when Sleeping Giants was a nascent outfit, “a founder,” presumably Rivitz, gave an interview with the New York Times that further emphasized his desire to avoid backlash within the ad industry. Times opinion contributor Pagan Kennedy wrote, “‘We’re focused on Breitbart News right now because they’re the biggest fish,’ a founder of Sleeping Giants told me. (He requested anonymity because some members of the group work in the digital-media industry.)”

Their previously acknowledged reasons for anonymity, however, go beyond typical employment concerns over personal politics. As Rivitz, and it is believed, other members of Sleeping Giants work in the ad industry, there exists the potential they were working to organize boycotts against the very clients they create ads for.

As GQ wrote in an otherwise laudatory profile back in March, “To date, the people behind Sleeping Giants have elected to remain anonymous, noting that a few of them work in marketing-related fields in which their off-hours activism might be perceived as creating some kind of conflict of interest.”

Now exposed, Rivitz was forced to address this potential conflict of interest in the growing social media backlash against Sleeping Giants. As some Twitter users were quick to point out, several major Goodby Silverstein & Partners clients, including BMW, Adobe, and Xfinity, have all been targets of Sleeping Giants’ boycotts. Rivitz quickly denied he worked for Goodby Silverstein during the relevant period to create a conflict of interest:

Sorry. Just need to address something that appears to be “trending”. Matt Rivitz has not been employed by @GSP in almost a decade. Find someone else to counter-boycott. https://t.co/TRIS6y8rxo

The Sleeping Giants account has not addressed where Rivitz has worked in the period he was pressuring advertisers to blacklist conservatives. Nor have the other ad executives who make up Sleeping Giants made any effort to disclose their identities or make public who their corporate clients are.