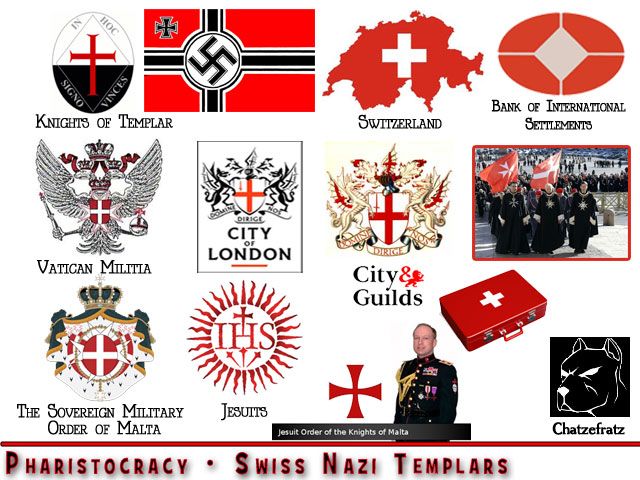 The Nazis rule parallel with the Octogon slave masters. In fact, they are part of The Octogon. The Bank of England rules over the U.S. Federal Reserve Banks, as well as the German Deutsche Bank. These serve The Bank for International Settlements.

● Notice how THE POPE falls below in hierarchy, under THE BLACK POPE, who is above him and more powerful.

● Notice also how The Bank of England and the Rothchilds are also not at the top of the Pyramid, but rather the items as noted below.

This is the basic structure of the NWO folks.

► Here is The NWO pyramid, outlined in text format, extracted from a visual chart:

I. At the top of the pyramid, The Swiss Octogon Templars ╬ (SWS), the Pharanonic bloodine families.

These rule together with the Nazis, who claim to be the descendants of Atlantis.

II. Next comes The Black Pope ȸ Ψ , who via The Jesuits ۞ , command the NWO Roman empire which never died.

The Black Pope works with the Secret Societies – who work with the CIA and via JTTF with the FBI and US Intel agencies to run the drug trafficking, the depleted uranium weapons shipments, the illegal white phosphorus weapons, the organ harvesting, the pedophilia rings, the car theft rings, the illegal use of the diplomatic containers and more. Human sacrifices, Human trafficking. The secret societies are puppets of the Black Pope. The Black Pope is a puppet of the CIA. The CIA is a puppet of the Swiss Octogon Templars. They hide their money in Bitcoin, which was created by Alice at the CERN LHC laboratories. Bitcoin is run by AI.

► Adolfo Nicolas, THE JESUIT GENERAL, THE BLACK POPE. The Jesuit foot soldiers = Jacob Rothschild & Evylyn Rothschild. These are completely subordinate to the Roman empire. In the past, the Jesuit army conducted the kills, such as JFK. Now it is the higher structure of the CIA (who did JFK and trying to kill Trump).

● These three rule together, with the Vatican at the Center.

● The Khazarian mafia Җ are the fake Jews, the Zionists, the illegitimate claimants of Israel

● 3 City States that Control the World:

Video – An interesting short film about three sovereign, corporate “city states” that are not part of the countries they are located in. They have their own laws, and identities, as indicated by their respective flags that clearly control the whole world. This film poses the idea that these city states control the world, and here are their rolls:

Receives taxes from their subjects (slaves) in Canada and the United States. They design and control our financial and banking systems.

THE BANK OF ENGLAND.

Death camps and stacks of black plastic coffins that can hold six to ten bodies each, are piled high in a long train-like fashion, as far as the eye can see, in the United States, today.

THE THREE CITY STATE IS A PUPPET OF ALL THE LEVELS ABOVE IN THE NWO PYRAMID. ▲

► The USA via Washington D.C. fuels the military arm of the 3 city state. The Vicar generals at the County level implement the power of the Vatican and the levels above that.

● The Clinton Foundation serves the CIA. The DNC as well. US Congress serves the CIA and its agendas. The US alphabet agencies – are private foreign-owned corporations that serve the 3 City State, which serves the Vatican. (None of them have a legal charter to be operating on US soil and are thus operating in violation of The Constitution & The Bill of Rights).

Power is given to the Beast via the private Federal Reserve banks control of the currencies of all countries on the planet. The USA has monopoly over the nuclear industry. THE URANIUM CRIME SYNDICATE IS VALUATED AT 20 QUADRILLION DOLLARS and is represented by Comey, Mueller, McCabe, the CIA, many members of Congress. The DOD is sucked and drained by the CIA. The CIA also places spies into Congress, such as THE AWAN BROTHERS, and the rigged U.S. maritime courts (also operating in violation of The Constitution), protect them. The NWO via this system implements the population control agenda via the UN. The Oil cartels and gas industry cartels control and run Congress. OPEC serves the oil cartel which in turn controls Congress. Saudia Arabia runs the oil cartel and finances the US Deep State operations, such as 9-11, via the CIA private corporation.

V. THE BANKING CARTEL – THE KNIGHTS OF MALTA

● The Rothchilds, Rockerfellers are part of the 5 main families which rule and control the world. There are more, but 5 are the main.

● The Bilderberg Group forms an integral part of the banking cartel. The CFR, the PRIVATE FEDERAL RESERVE BANKING SCAM.