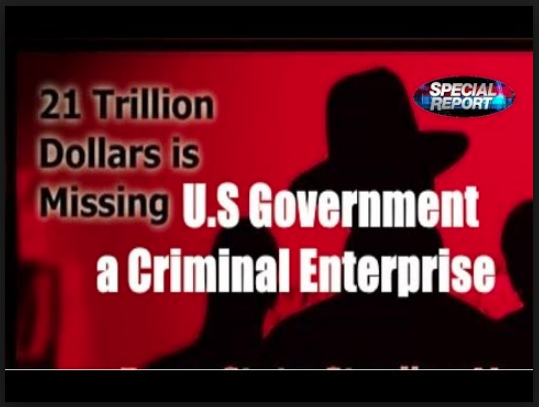 The government of the United States has morphed into a massive criminal
enterprise. Here is an excellent overview of how extensive the scandals are:
http://www.youtube.com/watch?v=eXBDD3zY6VI

The corruption is pervasive and includes both parties done under the umbrella of the
Military-Industrial Complex and National Security State and includes the murder of JFK,
9/11 and the current Russiagate charges surrounding the 2016 election.

What we see in the media are limited hang-outs that barely touch the surface of the
scandals and usually focus on the low-hanging fruit like Paul Manafort, Michael Cohen
or Carter Page who are often turned into informants by the FBI or CIA in attempt to
trap higher-ups like Trump whom they want to get rid of. (Can you say Felix Sater!?!)

We’re talking about the Very Deep State with access to trillions who use lobbyists
and top government officials to do their secret deals for arms, drugs, nuclear
technology, organ harvesting, oil and natural resources worth untold trillions.

The public is poorly informed by the MSM who rely on sensationalized accounts
whether its Stormy Daniels or even Russiagate itself that barely skim the surface of
the true levels of corruption.

The US government is indeed a massive criminal enterprise. It is linked to kindred
elements in other countries whether it be Russia, Israel, the UK, or Saudi Arabia who
participate in various illegal ratlines as revealed by Ed Snowden, the Panama Papers,
WikiLeaks and other sources:
http://www.cbc.ca/news/world/mossack-fonseca-panama-papers-new-leak-1.4714187

The accounts on the nightly news are like Reality TV or HBO dramas that have lots of
smoke and outrage by the commentators but rarely see any resolution. Meanwhile, the
swamp continues to grow rather than be drained.

The official investigations like the Warren Report, the 9/11 Commission and now the
OIG Report on Russiagate are little more than whitewashes to give the appearance
of concern while hindering the public’s ability to get at the truth.

This reflects the operations of what Peter Dale Scott labels the Deep State and I call
the Very Deep State: http://stonecoldtruth.com/9-11-and-the-very-deep-state/

This year’s version of John Dean (Watergate) and Ollie North (Iran-Contra) appears
to be Peter Strozk whose arrival for the obligatory grilling by Congress is on the way.

It’s all show! Have they locked up crooked Hillary yet? Did any of the major players
in previous scandals get frog-marched to prison? A few but for short times in country
club prisons with most getting off with a mere slap on the wrist and some embarrassing
moments which they cashier into lucrative book deals like we just saw with disgraced
former FBI Director James Comey.

But it is overwhelming, even for those like myself who devote many hours tracking the
various scandals. Most of us take the easy way out and say “why bother?” It’s a sad
picture as the country continues to descend into a moral, political and financial abyss!