The long awaited battle for Daraa has begun despite repeated warnings issued to the Syrian government from the US not to extend its military campaign to the country’s south, where the conflict first began with fierce anti-Assad protests in 2011 and then quickly spiraled into violence.

Fighting began Tuesday night as the army’s elite Tiger forces assaulted an air base in northeast Daraa which had been under jihadist control — namely the US-backed FSA “Southern Front” group and allied Hayat Tahrir Al-Sham (formerly Nusrah, al-Qaeda).After liberating the base government forces are now pounding opposition controlled towns with artillery fire which have for years been a hotbed of the al-Qaeda and ISIS terror insurgency.

The army and allied forces, including reportedly including Hezbollah special forces units, have penetrated deep into Al-Quneitra and Daraa governorates where a massive campaign is expected to begin at any moment for the final push to take control of the entire southwest. President Bashar al-Assad has vowed in recent interviews to liberate “every inch” of sovereign Syrian territory.

Notably ISIS has long maintained a stronghold along the Israeli occupied Golan Heights and Jordanian border — something which Israeli leadership and media are all too aware of and appear to have turned a blind eye to. Western media has increasingly acknowledged Israel’s “not so secret” quiet support to jihadists along the Golan border, with even the Wall Street Journal confirming weapons transfers and medical aid given to al-Qaeda insurgents.

As early as 2015 former Acting Director of the CIA Michael Morell directly told the Israeli public, during a tour of the country that Israel’s “dangerous game” in Syria consists in getting in bed with al-Qaeda in order to fight Shia Iran.

Syria continues to ignore US warnings that it cease “unilateral [military] activity” in the southwest: 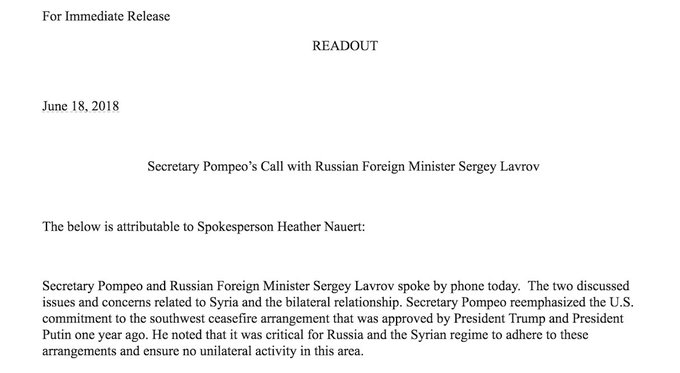 Twitter Ads info and privacy
However, Israeli Prime Minister Netanyahu’s top priority remains deterring Iran and Hezbollah in Syria, especially penetration of these forces near the Israeli border, which he has called a “red line” on which Israel would act — something also invoked during Israel’s massive airstrikes on Damascus and other locations in May.

The Syrian Army’s ongoing push into Deraa was no doubt a key topic of discussion during Netanyahu’s Monday visit to King Abdullah of Jordan — the first public meeting between the two leaders since 2014. Just last week Abdullah blasted Iran for what he described as “interferences in Arab affairs” and policies “that harm the principle of good neighborliness” while recalling the Jordanian ambassador to Iran in protest over events in Syria and Yemen.

As the war for Syria’s southwest heats up, and as Damascus continues to muster what are reported to be massive forces in preparation for the final major offensive, the potential for more Israeli or US and western allied intervention remains high. 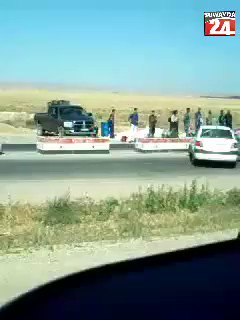 Below is a dispatch authored and submitted by Elijah Magnier, Middle East based chief international war correspondent for Al Rai Media, who is currently on the ground in the region and has interviewed multiple high level officials involved in the conflict.

The battle of Daraa against the “Islamic State” (ISIS) group (known under the name of Jaish Khaled Bin al-Waleed), al-Qaeda and the “Free Syrian Army” is happening without doubt. The Syrian government won’t take into consideration the recent US warnings that it might attack the Syrian Army, or Israel’s threat – Israel which is supporting Jihadists for years offering to these finance, intelligence information and medical assistance – to prevent the Damascus forces from reaching the borders. Damascus will also ignore the Russian-US-Jordanian agreement of protecting and respecting the de-escalation zone for very long.

Damascus asked its special forces under the command of General Suheil al-Hassan (known as al-Nimer – Tiger) to move to Daraa. These forces have been operating exclusively under the Russian military command over the entire Syrian geography. The Syrian government is also gathering anti-air missiles units in Daraa and in also at the back of the front around Damascus and have commanded its strategic missile units to be ready to intervene offering protection to the ground forces. This indicates the forthcoming battle is expected to be harsh and doesn’t exclude the intervention of the regional forces in Syria.

The Syrian command ignored the US and the Israeli requests to exclude Hezbollah and the Iranian allies from being present in Daraa. Thus, Syrian President Bashar al-Assad asked Hezbollah al-Ridwan Special Forces to take positions in Daraa and around it to participate in the forthcoming attack.

Sources on the ground believe the US is not expected to pull out of al-Tanf crossing between Syria and Iraq – as requested by Damascus in exchange of Hezbollah and Iran absence in Daraa – because Israel believed the battle is not going to take place. Therefore, the Syrian government has decided to engage in the Daraa’ battle and remove all jihadists from the south to regain total control of the territory or even impose a negotiation by force to reached a withdrawal of the US forces from al-Tanf.

The Syrian Army is also aiming to end the southern battle so it can move all offensive forces to the north and al-Badiya afterwards, to attack the remaining ISIS forces present in that part of Syria.

The US faces a dilemma with thousands of trained, supported and funded Syrian proxies militias in the border area between Syria and Iraq. These militias can be a burden if the US decides to withdraw because they are Arab and non-Kurdish forces. Thus, any agreement that returns al-Tanf to the central government means the retreat of these thousand militants to the area controlled by the Kurdish forces in al-Hasakah northern province, also under US occupation forces’ control.

This may cause ethnic battles between the Kurds and the Arab tribes of the region who refuse Kurdish dominance, especially bearing in mind that Ankara and Damascus look at the Kurdish cooperation with the occupying forces with a very hostile approach. Moreover, it is evident that no occupation force is destined to remain forever in an occupied country and that, sooner or later, the occupier historically knows that it will face popular resistance.

As for the Russian position in relation to the battle of Daraa, the military sources in the south of Syria said the Syrian Brigadier Suhail al-Hasan would not be present in the region without a special request from Russia. The “Tiger” forces are Special Forces operating under the command of Russia with the consent and agreement of President Bashar al-Assad.

Therefore, Moscow does not want any jihadist forces working with Israel or with the US to retain territory in Syria. Moreover, Russia is not aiming for a partial victory in the Levant now that the useful part of Syria (the most populated geographic area of the country) is liberated, with the exception of the north. This is why the south becomes a necessity that must be liberated.

Russia has bigger plans in the Levant: During my visit to the city of Palmyra and its surroundings, the presence of thousands of Russian troops is striking, indicating that Moscow is sending new infantry and special forces in very large numbers. This large presence has not been announced.

This could also indicate that Russia does not want the US to maintain a long-term sphere of influence in Syria and also wants to remain the only force in Syria as its sphere of influence. This perception of Russia’s approach towards Syria’s allies is complicated and difficult to achieve today. Moscow can’t hold the ultimate decision of who can stay or leave in Syria. Moreover, for the time being, Russia considers that all the allied forces – including Hezbollah and Iran and its allies – are absolutely necessary as long as there are US forces occupying the country.

Turkey is not a threat or a dilemma for Russia. Moscow and Ankara have reached various understandings since the battle of the Greater Aleppo to the battle of Ghouta and then the battle of Afrin and the Turkish spread in Idlib and its environs with the aim to strike and “divide” al-Qaeda (the most radical “Hurraas al-Deen” split from “Hayat Tahrir al-Sham” under Abu Mohammad al-Joulani at the request of Turkey).

Russia and Turkey consider the US as the biggest threat in Syria because of the “regime change” intention and the partition projects the US is capable of promoting, and the desire to create for the Kurds a special entity, not for the love of the Kurds, but to keep pressure on both Ankara and Damascus.

Thus, the battle of the south is coming despite Israeli harassment and striking the allied forces of Iran fighting ISIS in Albuqmal and its request – in vain – to see Hezbollah away from Daraa. Israel is trying to disrupt the stability of Syria but has failed to attract any serious attention to its necessity because the strategic goal today is to liberate the south. Assad is not worried about Israel’s concern and is far from assuming Israel’s border security and the 1974 demarcation line in the occupied Golan heights.

Damascus is working with its allies to liberate the south with no hesitation, free from any influence or threats of any magnitude, because the time has come to end al-Qaeda and ISIS in the south first, so that the army can move towards the eastern desert and concentrate on the US and Turkish occupation forces in the north.