Trump lacks ‘mental capacities,’ Iran says after US pulls out of nuclear deal 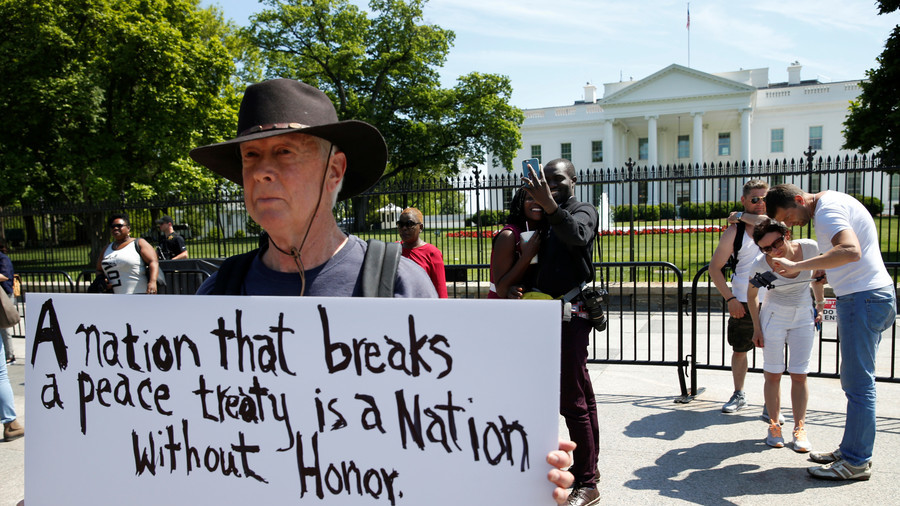 Protests outside the White House as the US withdraws from the Iran deal. © Leah Millis / Reuters

Trump lacks ‘mental capacities,’ Iran says after US pulls out of nuclear deal

The speaker of Iran’s parliament has offered a particularly scathing review of US President Donald Trump’s decision to pull the US out of the Iran nuclear deal, saying Trump does not have the “mental capacity” for his job.

Trump announced that he was withdrawing the United States from the landmark deal on Tuesday, sparking an avalanche of criticism from both sides of the political divide in America and also upsetting the international community, including US allies and Russia.

The speaker of Iran’s parliament, Ali Larijani, took a particularly dim view of the decision telling the Iranian assembly that: “Trump does not have the mental capacity to deal with issues.”

“Trump’s abandoning of the nuclear deal was a diplomatic show… Iran has no obligation to honor its commitments under the current situation,” Larijani said. “It is obvious that Trump only understands the language of force.”

Members of parliament also chanted “Death to America,” and burned a US flag and a symbolic copy of the nuclear pact, known officially as the Joint Comprehensive Plan of Action (JCPOA), Reuters reports.

President Hassan Rouhani said Iran would remain committed to the deal despite Washington’s decision to withdraw from it. “If we achieve the deal’s goals in cooperation with other members of the deal, it will remain in place… By exiting the deal, America has officially undermined its commitment to an international treaty,”Rouhani said in a televised speech.

Rouhani added that he has ordered the foreign ministry to negotiate with European countries, China, and Russia in coming weeks. “If at the end of this short period we conclude that we can fully benefit from the JCPOA with the cooperation of all countries, the deal would remain,” he said.

Iran’s Supreme Leader Ayatollah Ali Khamenei said Trump’s announcement was “silly and superficial.” He went on:“He had maybe more than 10 lies in his comments. Mr. Trump, I tell you, on behalf of the Iranian people: You’ve made a mistake.”

Reaction at home and abroad

The 2015 agreement lifted sanctions on Iran in exchange for Tehran limiting its nuclear program. Trump’s decision to back out of it has been met with a chorus of disapproval at home and abroad.

The Senate’s second-ranking Democrat, Dick Durbin, labelled it “a mistake of historic proportions” which “isolates the United States from the world.” Several GOP lawmakers also questioned Trump’s decision. “I just don’t think that it’s a wise move,” Arizona Republican Senator Jeff Flake told CNN, adding that it makes the US less reliable in the eyes of both its partners and adversaries. 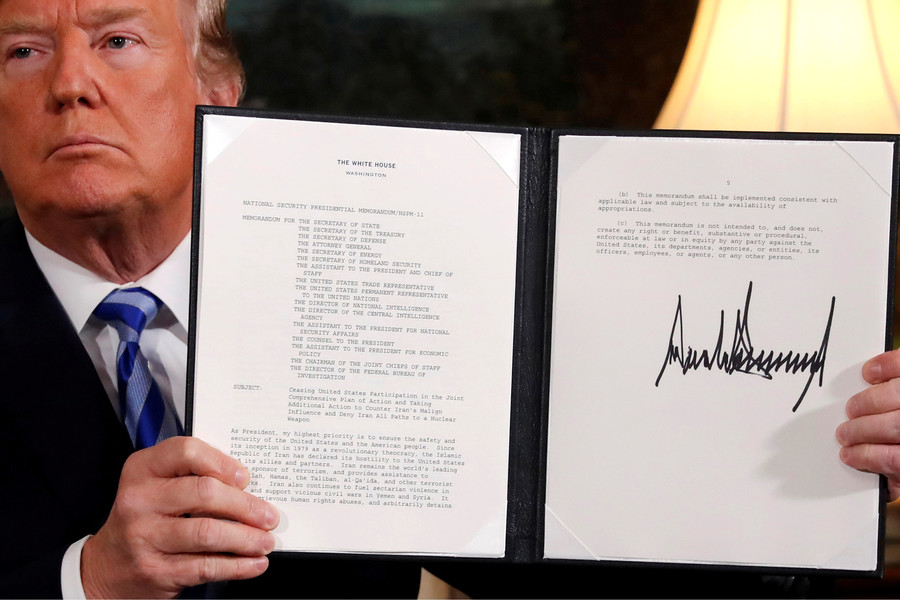 A host of international powers also condemned the decision and vowed to protect the deal. Russia’s acting foreign minister, Sergey Lavrov, said that Russia remains committed to the pact, while France’s foreign minister, Jean-Yves Le Drian, insisted the deal was not dead.

On Wednesday, China said it regrets the decision because it raises the risk of conflict in the Middle East. The Asian power said it will safeguard the deal and called on all relevant parties to assume a responsible attitude. Turkish President Recep Tayyip Erdogan said the United States will be the loser from President Trump’s decision.