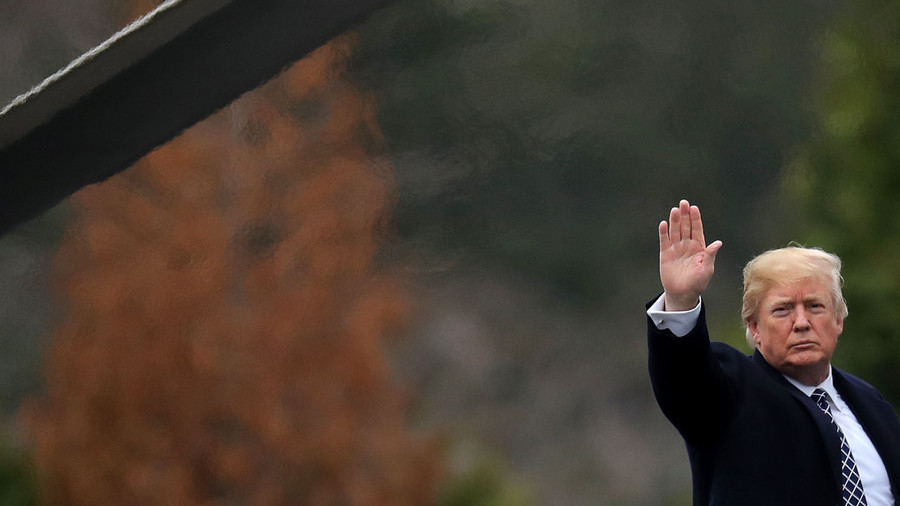 Trump ‘flips off’ the rest of the world, losing friends and allies

With a White House riven by policy feuds, Trump has been tearing up agreements and treaties right and left, as well as threating military action and sanctions. This has left its allies wondering if the US is, in fact, an ally.

On the same day that China and the US announced a temporary “moratorium” on trade sanctions by both countries on each other’s exports, China Daily, the English-language official newspaper of the Chinese government, ran a full-page article about how the US was losing the confidence of friends and allies around the globe as the Trump administration tears up one longstanding international or bilateral agreement after another.

And then there’s Der Spiegel, the leading weekly news magazine in Germany – a key US NATO ally – which recently ran a cover depicting Trump as a raised middle finger ‘flipping the bird’ at Europe. It’s a jarring visual image of how European governments and citizens are viewing Trump’s decision to pull the US out of a UN-approved six-nation agreement, largely negotiated by the prior Obama administration, to halt Iran’s nuclear fuel enrichment program for 15 years in return for a lifting sanctions on that country.

To a globe-trotting journalist (fresh from visits to the Philippines and Hong Kong, and headed for Europe in July), it certainly looks like the US is doing its best to antagonize just about every friend it has in the world. That’s with the singular exception of Israel, of course, where the US is offering unflagging support for that country’s brutal slaughter-by-sniper of over a hundred unarmed Gazan Palestinian protesters and the deliberate maiming of thousands of others – an atrocity that is being blasted by the United Nations Human Rights Commission and most nations of the world.

Der Spiegel’s May 11 issue also featured a stinging editorial, which referred to the summary withdrawal by the US from the so-called P5+1 nuclear deal with Iran, following US threats of trade sanctions against key trading partners in Europe, and Trump’s earlier withdrawal from the 2016 global climate agreement reached by virtually all the nations of the world. It described this as a kind of final blow to decades of close friendship between the nations of Europe and the United States.

The editorial stated that Trump’s decision to withdraw the US from the Iran nuclear deal “marks the temporary suspension of the trans-Atlantic alliance,” bringing “chaos where there was once order.”

It proceeded to say: “Our relationship with the United States cannot currently be called a friendship and can hardly be referred to as a partnership… The West as we once knew it no longer exists. It is impossible to overstate what Trump has dismantled in the last 16 months.”

The Iran deal fall-out could prove increasingly serious for US-European relations as time goes on, with Trump’s National Security Advisor John Bolton threatening US penalties for European companies that trade with or invest in Iran in violation of a US – not UN – embargo. European countries understandably see such a threat as a violation of their own sovereignty and a breach of an international agreement. Trump’s new Secretary of State Mike Pompeo is also upping the ante, vowing that the US will “crush” Iran economically, in what is being widely viewed as a “regime-change” threat against Iran – something no European NATO nations have signed up for. Indeed, European countries are looking at ways to defuse any US sanctions threats against their companies by bypassing the US financial system in their dealings with Iran.

However, the damage being done to US relations with other countries is not limited to Europe. China, significantly, has shown no interest in supporting any unilateral US boycott of Iran, and is reported to be negotiating for long-term contracts that could lock in lower prices for Iranian oil for the oil-hungry Chinese economy – contracts that would be financed in Chinese renminbi instead of dollars.

Trump also flipped off North Korea, first pushing for a summit meeting with Kim Jong-un on July 12, and then – after Kim had both released three American prisoners and blew up the most of the country’s plutonium and bomb-testing infrastructure as a sign of good will – turned around and said he would not meet with the North Korean leader.

There are also reports that Japan, another staunch US ally since the end of the Second World War, is making overtures to China for better relations as Tokyo loses confidence in the reliability of the US. Even as early as mid-April, seeing the writing on the wall and facing threats of trade sanctions from its long-time ally across the Pacific, Japan began trying to reset its often tense relations with China to put them on a friendlier footing. It seems unlikely that Japan, another country that imports almost all of its oil, would comply with any US-led boycott of Iranian oil as long as Iran’s price is right.

The carnage in US global relations is even broader, however. The re-election earlier this week of Nicolas Maduro as president of Venezuela, for example, which the US is calling a fraud, has sparked calls in Washington for a boycott of Venezuelan oil. Again, such a boycott, particularly at a time of rising oil prices (now trading above $72 a barrel globally), is unlikely to win much support from US allies in Europe, Asia or especially Latin America, where heavy handed US economic policies are increasingly viewed with disgust.

All this comes at a time that US-Russia relations are in the toilet, following US placement of offensive military equipment along Russia’s western border, continued calls from Trump administration officials for Russia to return Crimea to Ukrainian control, and the US bombing of Syrian government positions backed by Russia. Even President Nixon’s former Secretary of State Henry Kissinger has long been advising Trump to accept the “re-integration” of Crimea with Russia, but the Trump administration continues to bluster, insisting on the peninsula’s “return” to Ukraine. It is also supporting renewed Ukrainian military action against the secessionist provinces of Donetsk and Luhansk.

It is hard to fathom what Trump and US policymakers are up to in the midst of the president’s Korean peace deal and his hopes of winning a Nobel Peace Prize hitting the rocks following his national security adviser’s threatening call for a “Libyan model” for North Korean denuclearization; as well as a threatened trade war with China merely postponed by a face-saving moratorium on mutual trade sanctions, but with no real resolution of differences; and with countries around the world up in arms over what is seen as unseemly unilateralism by the administration regarding the rejection of already agreed-upon trade and treaty arrangements.

Clearly with a critical by-election looming that could see Democrats winning control of both houses of Congress in November, Trump is playing to his hard-core political base of frustrated working-class voters and super-nationalists by doing what he said he would do in his campaign: ripping up trade agreements that he calls “bad for America,” and acting decisively in contrast to what he called President Obama’s weakness in places like Ukraine and Syria. How that actually helps the US economy or the American people is difficult to comprehend.

Clearly too, though, the Trump administration is in chaos, with his top trade negotiators Treasury Secretary Steve Mnuchin and Chief Trade Negotiator Peter Navarro observed having a vulgar screaming match outside their Beijing hotel, and with Bolton undermining weeks of work on a possible Trump-Kim summit which the president clearly wants to go well, but which now may end up being canceled by an angry Kim.

If the US ends up sanctioning China, Japan, major European countries, Venezuela, Iran and any country that doesn’t go along with those sanctions – all of which could happen – it’s hard to see what markets US exporters will have left open to them.

Meanwhile, tariffs resulting from US import sanctions will devastate Americans who rely on cheap imports from China and other countries to stretch budgets strained by years of stagnant incomes.

Despite recent polls showing that most Americans are sick of the country’s endless wars and military interventions, the Trump administration keeps threatening more conflict, whether it’s in Afghanistan or North Korea, Eastern Europe, or even over Taiwan and China’s territorial claims in the South China Sea. Again, it’s difficult to see how the US economy can achieve a promised 3-percent-or-greater growth track while the government is spending over $1 trillion a year on its over-extended military – something that Trump once criticized but now enthusiastically endorses. This will be especially difficult if hard-liners in the White House continue pressing for “regime-change” wars against both Iran and North Korea, even as the Syrian conflict and the war in Afghanistan continue to fester.

The self-styled “greatest deal maker” Trump has long boasted of his ability to close a deal, but he has little or nothing to show for it a year and a half into his presidency. For a man who reportedly loved to show off his face on magazine covers to young women he was bedding in hotel suites, all he’s got to show lately is a cartoon image of himself depicted as a raised middle finger on the cover of a German news weekly.