German-Italian relations at an all-time low German-Italian relations at an all-time low

I doubt that when Getty uttered this line more than half a century ago he ever imagined it would apply to countries, yet here we are.

Too many pundits believe Germany holds all the aces in the European power dynamic. After all, they are the creditor nation with all the wealth. They should be able to dictate the terms of the European Union and instill their fiscal and monetary dominance on the rest of the EU nations.

Yet we have long passed the point where Germany can walk away from this union. Let’s forget the political implications of an EU collapse (which are considerable and provide a great degree of inertia for the EU remaining together), and instead focus on the fiscal implications.

Start with the obvious. The ECB is busy ramping up their balance sheet. At the start of 2015, they held 2 trillion euros in assets. Over the past three-and-a-half years, the ECB has more than doubled that. They now own more than 4.5 trillion of euros in assets. 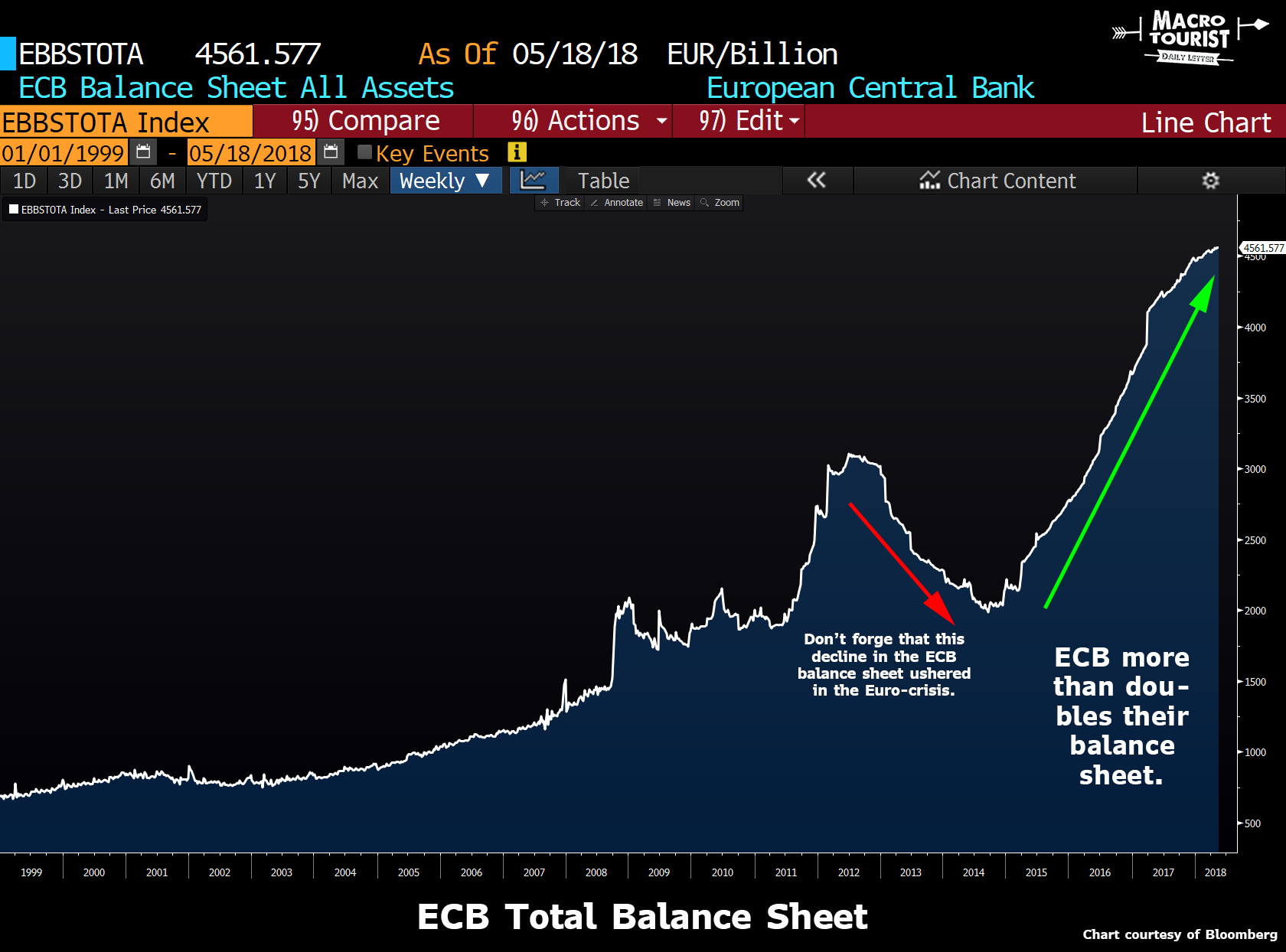 I know we have all become somewhat immune to these sorts of balance sheet expansions. Nowadays a couple of trillion seems like no big deal, but we should be shaking our head in disbelief. Instead of screaming from the rafters about the bat-shit-craziness of the situation, we have become six-martinis-numb and just smile at the inanity of it all.

Well, here is something to think about. See that balance sheet reduction from 2012-14? That move was the primary immediate cause of the Euro crisis. That frightening market decline forced Draghi to ramp asset purchases back up, and even break the financial blood-brain barrier by lowering rates below zero. So anyone who thinks that this balance sheet expansion isn’t permanent is living in another world. Europe needs constant balance sheet expansion to avoid falling into a deflationary spiral.

The idea that Mario Draghi will retire and be replaced by a hard-money German who restores monetary responsibility is laughable. Doing so would usher in an economic depression worse than the 1930s Great Depression. Think about the economic pain Greece experienced during the past Euro-crisis (for some colour – check out this post – High Debt Levels Rant), and then apply it to almost all of Europe. The rioting would fill the streets and countries would exit the European Union faster than Amy Schumer’s movies leave the theatres.

Although German Bunds are usually the ECB’s number one holding, have a look at this table: 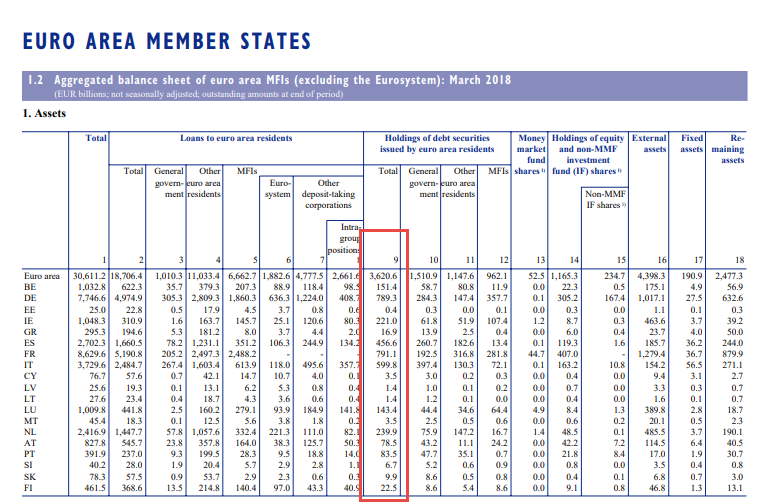 Total French, Italian and Spanish assets are multiples of German assets. Italian Government BTPs are almost 400 billion and there are another 200 billion of other Italian debt securities. 600 billion represents almost 20% of German GDP. And that’s only Italy. What are the chances that an Ital-exit is confined to one nation?

Remember back to the 1930s. Nations that devalued early and aggressively generally did better economically during the ensuing depression – I like to call this bar-fighting economics – hit first and hit hard.

The ECB’s balance sheet expansion has put Germany in an extremely difficult place. They cannot afford to cut back on the expansion for fear of another Euro-crisis, yet the more QE they do, they more Germany is on the hook.

I hate to break it to Germany, but it’s even worse than it looks.

Don’t forget that ECB balance sheet expansion is only one the methods that imbalances within the European Union are stabilized. There is another potentially even more scary mechanism that occurs behind the scenes without much fanfare. Although the ECB is Europe’s Central Bank, each member nation still has their own Central Bank. Since monetary policy is set for the Union as a whole, there are times when capital leaves one European nation in favour of another. Individual Central Banks cannot raise rates to counter these flows, so the ECB stands in as an intermediary.

Let’s say capital flees Italy and heads to Germany, to facilitate the flows, the Italian Central Bank borrows money from the ECB while the German Central Bank deposits excess reserves with the GDP, thus allowing it all to balance. The individual country net borrowing/lending amounts are known as Target 2 Reserves.

What do you think German and Italy’s Target2 balances look like? 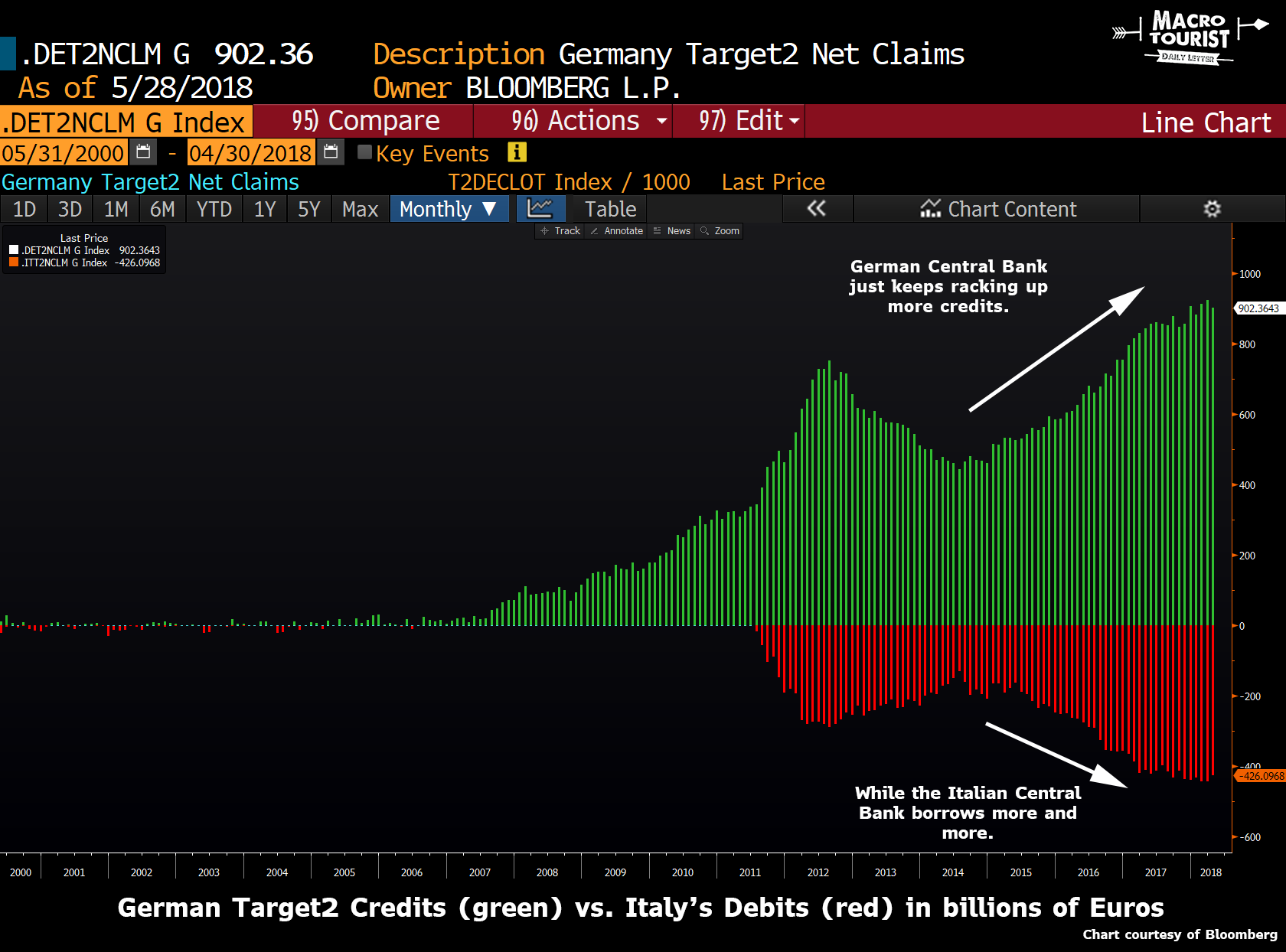 Yup. Germany just keeps digging a bigger and bigger hole. Another 900 trillion of assets that have been lent out to European nations. So almost 25% of German GDP.

Germany might think they will dictate terms of the European Union, but the reality is that they have way too much at stake to enforce their will on the debtor nations. Any perceived overly restrictive conditions will just hasten the EU’s demise.

No denying that Europe is a financial basket case. The main Central Bank is expanding its balance sheet at an unprecedented rate. All the while, the individual countries’ Central Banks are furiously adding exposure in a desperate attempt to keep the whole system from falling apart. Add into this toxic mix various political shenanigans as different countries try to extract even more advantage.

I will not bother attempting to provide any value-add analysis by telling you how the current Italian political drama will play out. I don’t have a clue.

But I will make a couple of comments.

First of all, be careful with scale. Lots of pundits are wailing about the 90 basis point increase in the BTP 10-year yield. 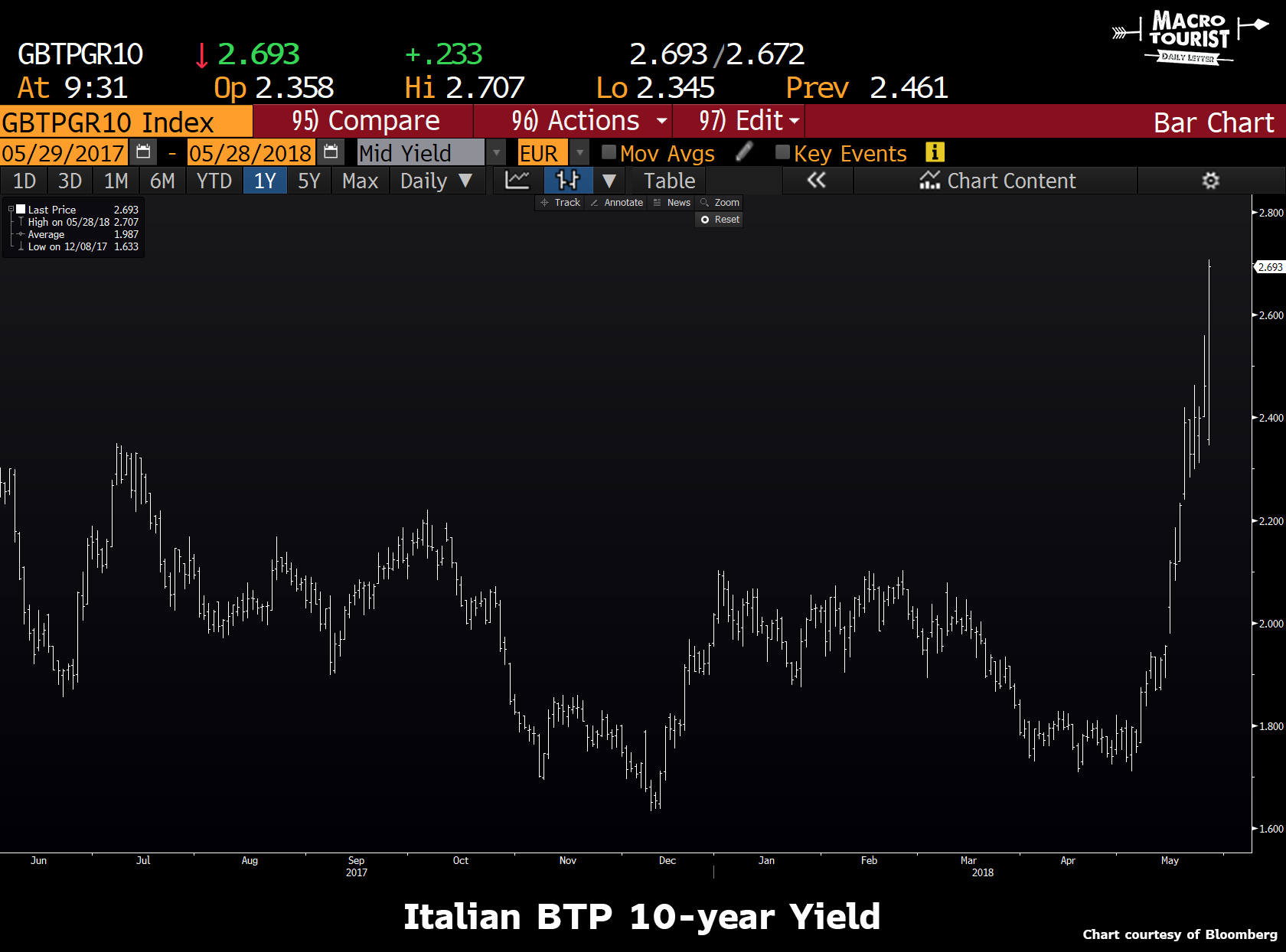 But back up the time frame a little. 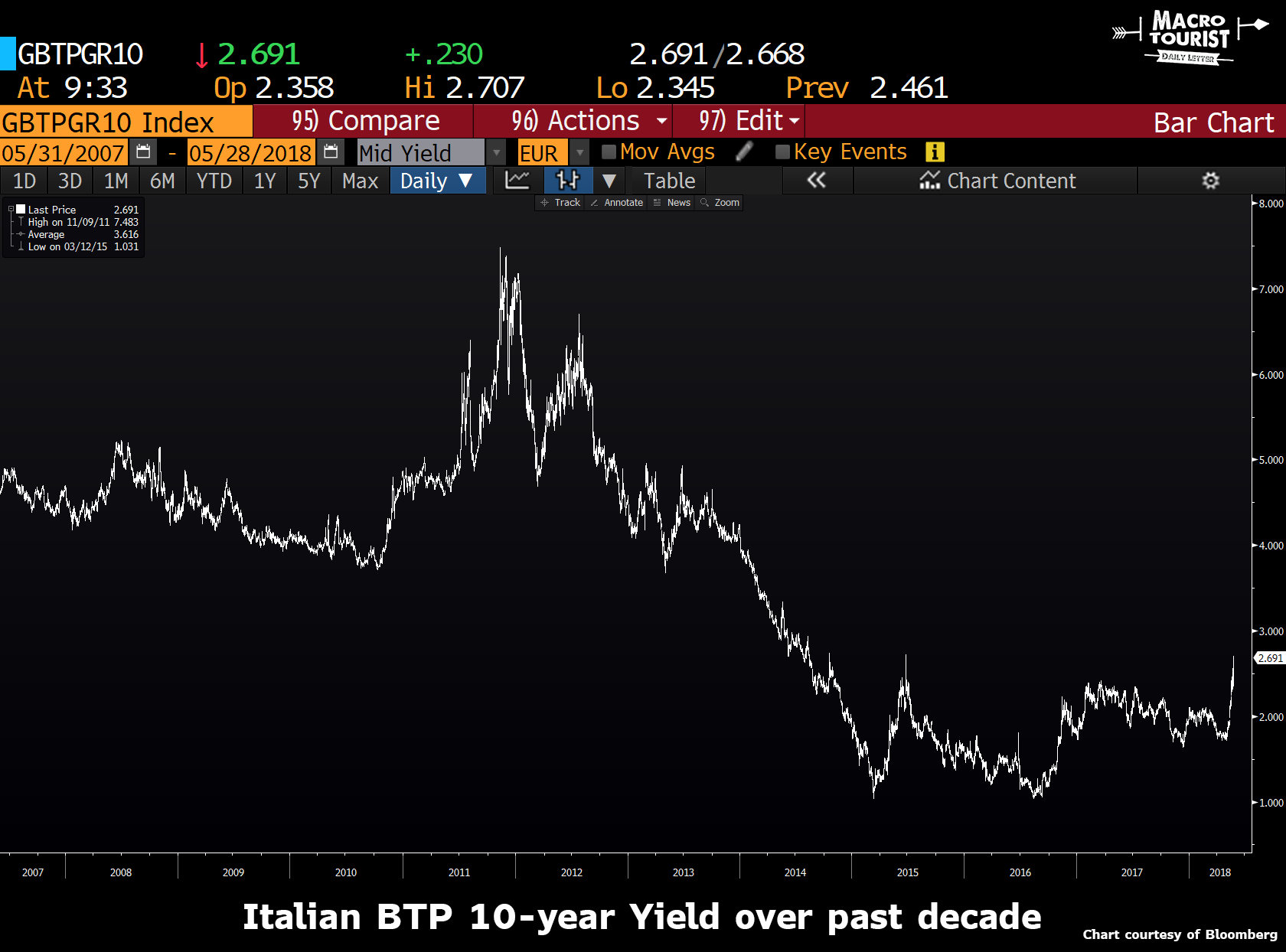 Therefore it’s easy to conclude that there is a good chance this crisis will get worse before it gets better. We probably need to see more pain than a rise to 2.7% in 10-year yields before the ECB and the rest of the European elites panic, but make no mistake – they will panic.

My only high-conviction belief is that eventually, the end game for Europe will be to inflate away all this debt. Even more so than US. The European Union is inherently more unstable than most other large countries. The net result of this instability will be a collapse to the lowest common denominator. Ultimately this easy monetary policy will be hugely beneficial to European stocks and disastrously detrimental to EU fixed-income. However, that’s the long-run, and everyone knows Keynes’ warning for those forecasting with this timeframe…

Thanks for reading,
Kevin Muir
the MacroTourist