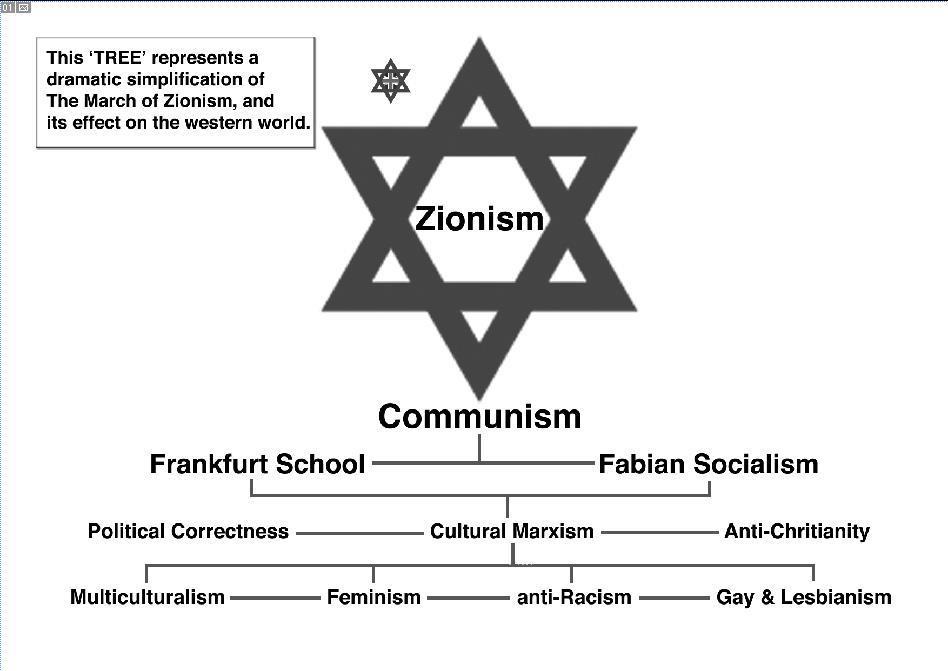 Mankind is victim of an ancient satanic conspiracy. The esoteric meaning of revolution is turning the world upside down, replacing God with SATAN.

This is behind the ongoing subversion of Western countries — racial cohesion, gender (family), national independence and Christianity. This is behind the Communist control of mass media, academia, and censorship of free speech.

Starting with the English Revolution, 1688, which led to the formation of the Bank of England (1694), and including the American (1776) French (1789) and Russia Revolutions (1918) the world has been brought under the control of the Masonic Jewish central bankers. This multi-generational Communist conspiracy is reaching fruition today with the Freemason Donald Trump in control of the US and Freemasons in power throughout the world.  Here Arnold Leese describes how they engineered the French Revolution.

“What is Communism?”  and   Most Politicians are Freemasons  and Freemasons Created the US to Advance NWO

Part One- Freemasonry Conceals its Diabolical Secret from Members

The Jews con­ceived the idea of conquering France by Freemasonry when they found that it could not be done by war. Let us, therefore, follow the growth of Freemasonry from the time of its foundation in England in 1717.

Freemasonry spread to France in 1730, and its early history is one of internal strife. Some sort of cooperation was, however, attained in 1766, under a new “Grande Loge Nationale de France,”afterward called the “Grand Orient.” Then, just as is happening today, French Freemasonry was penetrated by “higher rites” in the form of a secret society notoriously known as the Illuminati, of Adam Weishaupt (1748-1830). It is most interesting to watch the development of Jewish influence in the preparation and consummation of the French Revolution of 1789. Side by side one sees the growth of Illuminism among the Gentiles and Jews with a unique directive power wielded in Berlin by the Jews, Moses Mendelssohn (1728-86, grandfather of the famous composer), Naphtali Wessely (1725-1805), and the Jewish Bankers, Daniel Itzig, Friedlander, Meyer, Cerfbeer, and the Goldsmid Brothers in London. Jewish Illuminism was called Haskalah, and was headed and directed by Moses Mendelssohn, who also inspired the leaders of Masonic Illuminism such as Adam Weishaupt, H. S. Reimarus, Lessing, Nicolai, Ch. Dohm, Mirabeau, and others. The Jew, Bernard Lazare, has himself written: “There were Jews behind Weishaupt.” {“L’antisémitisme,” page 339.}

In 1782, a most important Masonic Congress took place at Wilhelmsbad, near Frankfurt, in which the plan of action was decided upon. The Comte de Virieu, who was present and was dismayed by what he heard there, declared on his return to Paris:–

“I shall not tell you the secrets which I have brought back, but what I believe I may tell you, is that a plot is being hatched, so well contrived and so deep, that it will be difficult for religion and for the Government not to succumb.”

Three years later, a member of the Illuminati was struck by lightning at Ratisbon, whilst carrying secret documents. The police found such compromising papers on him that the Bavarian Government searched the archives of the Illuminati in Munich. A complete plan for world revolution was discovered, and copies were sent to the various European Governments, who took no notice whatever and remained inactive.

…The Illuminati were suppressed in Bavaria in 1785, but Weis­haupt escaped, and his revolutionary work went on in other countries as before. The result was the First French Revolution of 1789. Its promoters were the Illuminati Mirabeau, l’Abbé Grégoire, Anacharsis Clootz, etc. It has frequently been openly acclaimed by Freemasons as their work.

“During the 18th Century, the glorious line of the Encyclopædists found in our temples a fervent audience, which, alone at that period, invoked the radiant motto, still unknown to the people, of ‘Liberty, Equality, Fraternity.’ The revolutionary seed germinated rapidly in that select company. Our illustrious brother masons, d’Alembert, Diderot, Helvetius, d’Holbach, Voltaire, and Condorcet, completed the evolution of people’s minds and prepared the way for a new age. And when the Bastille fell, Freemasonry had the supreme honour to present to humanity the charter which ithas elaborated with love.

“It was our brother mason, Lafayette, who was the first to bring forward the proposal for a ‘declaration of the natural rights of man and of the citizen living in society,’ in order to make it the first chapter of the constitution.

“On 25th August, 1789, the Constituent Assembly, of which more than 300 members were Masons, finally adopted, almost word for word, such as it had for long been elaborated in the Lodges, the text of the Immortal Declaration of the rights of man . . . etc., etc.”–the mason Bonnet, orator of the Convent du Grand Orient de France in 1904.

France, in 1789, counted over 2,000 lodges affiliated to the Grand Orient, with over 100,000 adepts; and it is a fact that at the outbreak of the Revolution, all the lodges suddenly became Jacobin Clubs.

The French Revolutions of 1830, 1848 and 1870 were equally the work of Judæo-Freemasonry. In the first days of the 1848 revolution, 300 Freemasons, with their banners flying over brethren of every rite representing French Freemasonry, marched to the Hotel de Ville, and there offered their banner to the Provisional Government of the Republic, proclaiming aloud the part they had just taken in the glorious Revolution. M. de Lamartine made them this answer, which was received with enthusiasm by the Lodges:–

“It is from the depths of your lodges that the ideas have emanated, first in the dark, then in the twilight, and now in the full light of day, which have laid the foundations of the Revolutions of 1789, 1830, and 1848.” {Gargano,Irish Freemasons and their Foreign Brothers, page 55.}

COMMUNISM SEEKS THE DESTRUCTION OF NATION, RACE, FAMILY AND RELIGION

The following is taken from the speech made by Domenico Anghera, Grand Master of the Supreme Council of Scottish Rites, when conferring on General Giuseppe Garibaldi the 33rd degree:–

” . . . . . Our first step, as builders of the new temple to the felicity of human glory, must be destruction. To destroy the present social state, we have suppressed religious teaching and the individual rights of persons. As we have overthrown the temporal power of the Pope, our most terrible and infamous enemy, by means of France and Italy, we must now break France, the strongest prop of the spiritual power. That we must do with the help of our own power and that of Germany.”

This speech was made before the Franco-Prussian War of 1870. {Domenico Margiotta, “Le Culte de la Nature dans la Franc-Maçonnerie Universelle,” page 45 et seq. Margiotta was a 33rd degree Mason, but he pub­lished all he knew because he was not given a responsible position.} On 1st September, 1870, the Second French Empire fell at the Battle of Sedan. The International and Freemasonry seized power, calling their government “The Government of National Defence,” and on 4th September the hand-picked Ministry of Freemasonry was constituted with Leon Gambetta (Jew) as Minister of the Interior. Of its eleven members, nine at least were Freemasons, three being Jews (including Adolph Cremieux, founder of the Alliance Israelite Universelle). Following this came the “Commune,” famous through history for its revival of the atrocities of the First French Revolution of 1793.

THE grounds for attacking Freemasonry may be summed up under four headings:–

1.–It is a secret society which organizes a political and economic boycott against non-Masons, which is contrary to the best interests of the State.

2.–It is universal, and preaches the Universal Brotherhood of Man, which means in practice the mongrelization of the human species.

3.–It is subversive in a political sense, and was started by Jewry ­and is now controlled by Jewry for the purpose of paving the way for Bolshevism, as outlined in the Protocols of the Elders of Zion.

4.–It is subversive in an ethical sense, and its purpose is to undermine all Gentile creeds and substitute Gnosticism.