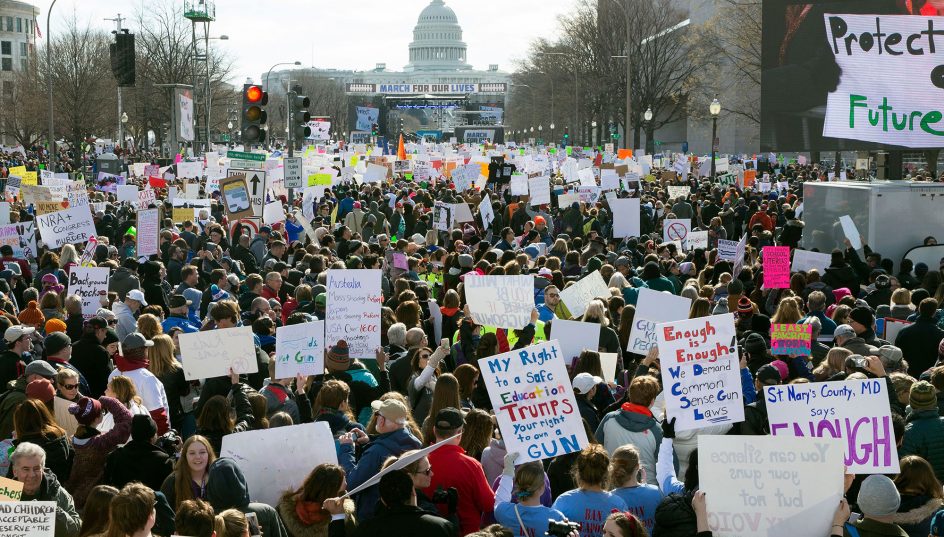 On March 24, 2018, one month and ten days after the February 14 shooting at Marjory Stoneman Douglas High School in Parkland, Florida, student-led pro-gun control “March For Our Lives” demonstrations took place across America, including in Washington, D.C.

The word “Our” in March For Our Lives refers to students.

March For Our Lives was a student-led demonstration in support of tighter gun control that took place on March 24, 2018, in Washington, D.C., with over 800 sibling events throughout the United States and around the world. Student organizers from Never Again MSD planned the march in collaboration with the nonprofit organization Everytown for Gun Safety. The event followed the Stoneman Douglas High School shooting, which was described by many media outlets as a possible tipping point for gun control legislation.

Public demonstrations, especially those that are large-scale like March For Our Lives, require a permit from the police department of the city in which the demonstration will take place.

Dammegard received this email from Officer Scott C. Earhardt of the Homeland Security Bureau of the Metropolitan Police Department:

In reference to your inquiry concerning the March For Our Lives Demonstration, here in the District of Columbia on March 24, 2018. MPD received a permit application several months prior to the actual event, and there was several months of planning for this large event.

If your are requesting additional information reference this event, please follow the below steps to file your Freedom of Information Act request:

If your have any additional question sor concerns, please feel free in contacting me directly.

Below is a screenshot of the email (source: Professor James Fetzer):

According to the PDF document, Metropolitan Police Department, Washington.D.C., Scott Earhardt indeed is a detective there. Here’s a screenshot I took from page 6 of the 65-page document:

Here are some facts:

There are claims that the email from Officer Earhardt is bogus, and that there’s a permit application for March For Our Lives in D.C. which is dated February 20, 2018.

I, therefore, asked Professor James Fetzer for the original Earhardt email. Fetzer had obtained the screenshot of the email from Ole Dammegard, whose friend was the person who originally contacted Officer Earhardt about the permit.

I just received an email from Mr. Dammegard, with an attachment of the original Earhardt email, indicating the date on which the email was sent to Dammegard’s friend who, understandably, prefers to remain anonymous.

I find the above email from Officer Earhardt to be credible. I also have confidence in the integrity of Professor Fetzer and Mr. Dammegard, neither of whom profits from counterfeiting the email — which is something we can’t say about those people who instigate false-flag mass-shooting incidents like Parkland.

In the meantime, Professor Fetzer had placed a phone call to Officer Earhardt to confirm the latter’s email. When we hear from Officer Earhardt, I will update this post with that information.