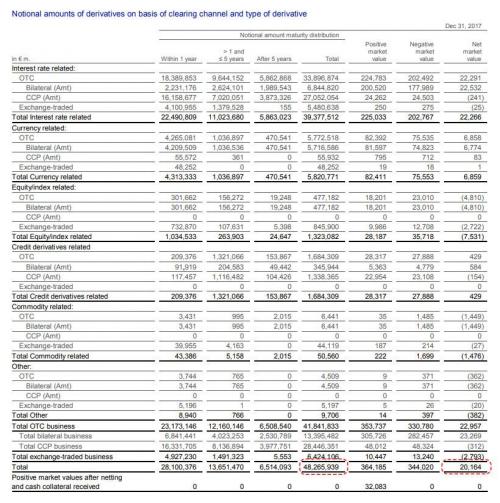 Back in the summer of 2015, Deutsche Bank mistakenly paid $6 billion to a hedge fund client in a “fat finger” trade on its foreign exchange desk. The embarrassed bank recovered the money from the US hedge fund the next day, and quickly accused a junior member of the bank’s forex sales team of being responsible for the transfer while his boss was on holiday; as the bank further explained, instead of processing a net value, the person processed a gross figure: “That meant the trade had too many zeroes” a staffer helpfully explained.

Fast forward to today when Germany’s largest bank has done it again.

According to Bloomberg, a routine payment at Deutsche Bank “went awry” (or as the article notes “was flubbed”) last month when the bank with the €48 trillion in derivatives…

… mistakenly sent 28 billion euros ($35 billion) to an exchange as part of its daily derivatives margin transfers.

While the error was quickly spotted and no financial harm was suffered by the bank which has made clusterfucks into its business model, it represents a terrific case study why one should never confuse gross and net derivative exposure: as Bloomberg adds, the “errant” transfer occurred about a week before Easter as Deutsche Bank was conducting a daily collateral adjustment. The delighted – if only for a short time – recipient of the massive transfer was the Deutsche Boerse AG’s Eurex clearinghouse, in whose account the sum landed.

“This was an operational error in the movement of collateral between Deutsche Bank’s principal accounts and Deutsche Bank’s Eurex account,” Charlie Olivier, a spokesman for Deutsche Bank, wrote in an emailed statement. “The error was identified within a matter of minutes, and then rectified. We have rigorously reviewed the reasons why this error occurred and taken steps to prevent its recurrence.”

Of course, Deutsche Bank vowed the same “rigorous” review took place after the 2015 FX transfer fiasco and clearly nothing changed. Actually no, what changed is that Deutsche Bank has been a chronic underperformer, its stock crashed in 2016 to levels below the financial crisis amid speculation about its solvency, and just last week the bank’s latest CEO was fired for what really amounted to incompetence.

Surely a pattern is emerging.

Indeed, as Bloomberg adds, “the episode raises fresh questions about the bank’s risk and control processes, at a time when lenders are faced with increased scrutiny from regulators. It’s another embarrassment for Deutsche Bank at a time when it is undergoing a change of leadership in the wake of its third straightannual loss.”

And while the “glitch” took place during the last days of now ex-CEO John Cryan’s tenure, it will surely be seen as another wrinkle for the bank’s new chief executive Christian Sewing who even before this news already had a mountain to climb, as Deutsche Bank is the worst performing member of the Stoxx 600 banks index this year, with the shares having fallen 26% YTD.

Also, in light of the latest debacle, one wonders if the transfer had anything to do with the recent ouster of bank COO Kim Hammonds, who reportedly called Deutsche Bank “the most dysfunctional company” she’d ever worked for.

Finally, adding insult to injury, as we reported over the weekend Deutsche Bank was asked by the ECB to simulate a “crisis scenario” and an orderly wind-down of its trading book, making the German lender the first European bank to receive such a request from the ECB, which is reportedly using Europe’s largest investment bank as a “guinea pig” before it sends similar requests to other banks.

Then again, other European banks don’t have €48.3 trillion in derivatives they would need to wind-down overnight.