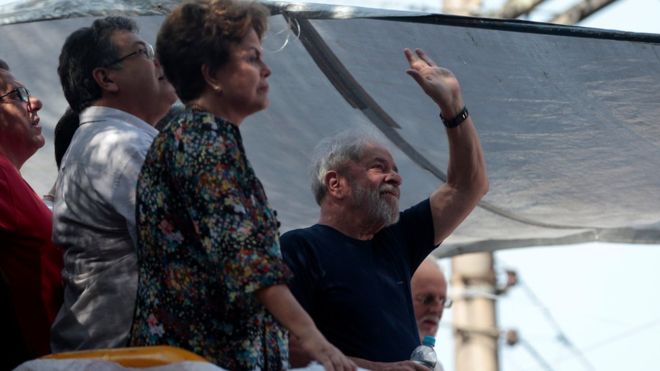 REUTERS – Dilma Rousseff (foreground) was at the side of Lula, seen here waving

Former Brazilian President Luis Inácio Lula da Silva has appeared on stage before supporters outside Sao Paulo as he continues to defy a court order to begin a jail term for corruption.

He emerged from the union building where he is staying to attend a service for his late wife, Marisa Leticia.

Dilma Rousseff, his impeached successor as president, joined him on the stage.

Lula says the case against him was politically motivated.

A large crowd of supporters are surrounding the union building in the suburb of Sao Bernardo do Campo, where Lula built his trade union and political career. 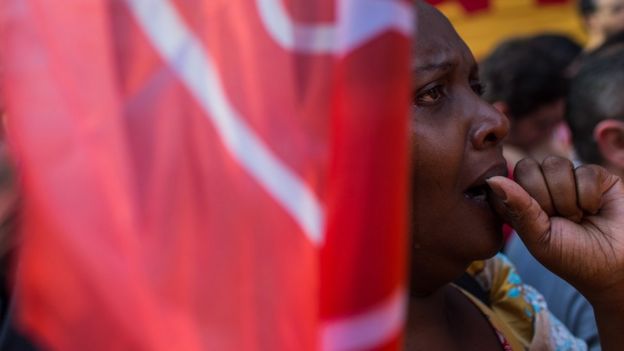 GETTY IMAGES – Supporters of Lula camped out at the union building

The former metalworker and trade union activist is an iconic figure for the left in Latin America. He is the first left-wing leader to make it to the Brazilian presidency in nearly half a century.

The authorities stress he is not being regarded as a fugitive, as everyone knows where he is.

Why is Lula doing this?

Lula says his conviction was designed to stop him from running for president in October’s poll, which he had been favourite to win.

In an order issued on Thursday, federal judge Sergio Moro said Lula had to present himself before 17:00 local time (20:00 GMT) on Friday at the federal police headquarters in the southern city of Curitiba.

Minutes before the deadline, his lawyers lost a bid to keep him out of jail while he appealed against his conviction. 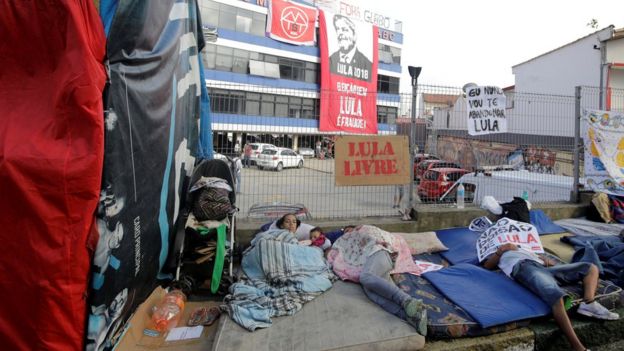 REUTERS – Lula posters are hung on fencing at the union building 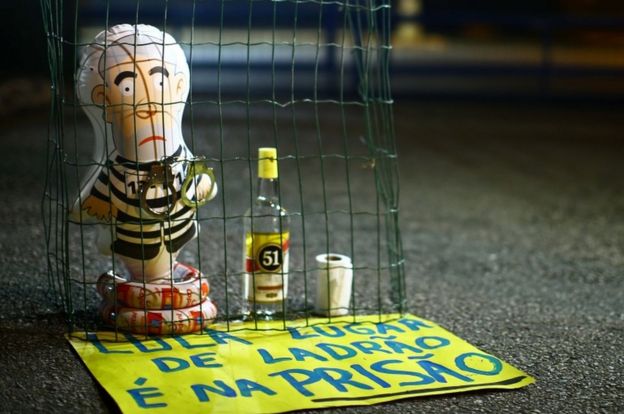 AFP/GETTY IMAGES – Lula’s opponents protested outside the federal police headquarters where he was meant to surrender. The sign reads: “Lula, the place for a thief is prison.”

These past 24 hours have captivated Brazil. Helicopters have been circling the metalworkers’ union building where Lula is with his supporters, broadcasting every move for viewers across the country.

Lula waves at some of his supporters, who have taken to the street

As Friday went on the crowds got bigger. The deadline came and went, and the thousands of Lula fans waiting outside carried on regardless – chanting their support for a man many say was the best president Brazil ever had.

What happens now though is unclear – even for a country used to complicated political sagas, this is uncharted territory. Will he go willingly, or could he – and his supporters – put up a fight? There is concern that Lula’s demise could yet turn violent.

Lula served as president from 2003-2011. Despite a lead in opinion polls ahead of October’s election, he remains a divisive figure.

While he was in office, Brazil experienced its longest period of economic growth in three decades, allowing his administration to spend lavishly on social programmes.

Tens of millions of people were lifted out of poverty thanks to the initiatives taken by his government and he left office after two consecutive terms (the maximum allowed in Brazil) with record popularity ratings.

What was he convicted of?

The charges against Lula came from an anti-corruption investigation known as Operation Car Wash, which has embroiled top politicians from several parties.

He was convicted of receiving a renovated beachfront apartment worth some 3.7m reais ($1.1m, £790,000), as a bribe from engineering firm OAS. 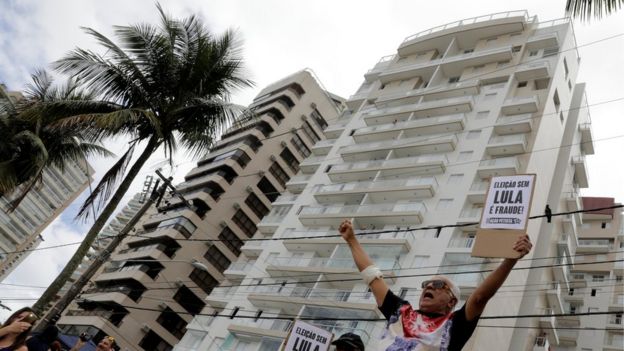 The defence says Lula’s ownership of the apartment has never been proven and that his conviction rests largely on the word of the former chairman of OAS, himself convicted of corruption.

There are two higher courts which he can still turn to, the Superior Court and the Supreme Court.

The latter has only ruled so far on whether he should go to jail pending further appeals, rather than on the underlying case. 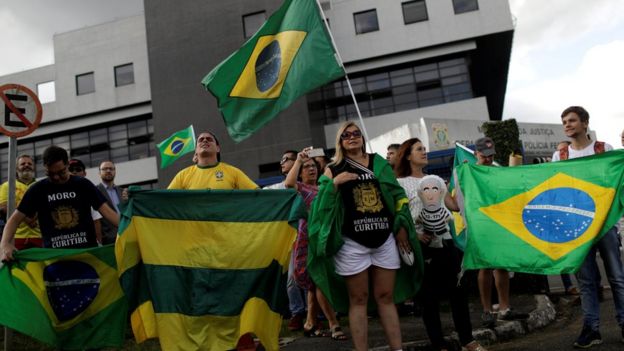 Neither of those courts would re-examine whether Lula was guilty of corruption. They would look into whether legal procedures were followed correctly and whether his constitutional rights were breached.

This could take months or even years. If either court were to rule in Lula’s favour, his conviction could be annulled and he would be released.