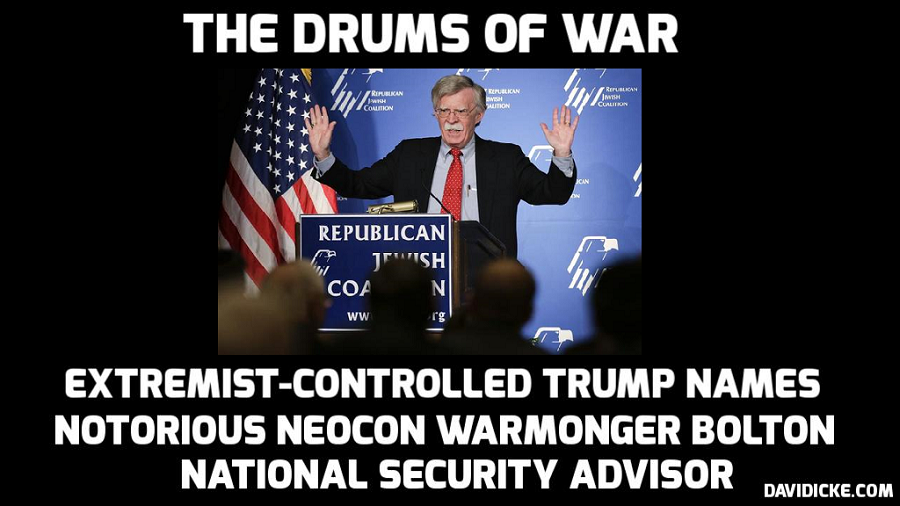 His appointment to a sensitive administration position is something to lose sleep over.

Hillary’s defeat didn’t dodge a nuclear bullet, as hoped for. It gave Trump the trigger, perhaps as willing to squeeze it to prove his machismo, a terrifying possibility.

The most perilous time in world history is now more frightening. Long forgotten is Trump’s campaign hyperbole, calling NATO “obsolete,” along with criticizing trillions of dollars spent on militarism and warmaking.

Instead of stepping back from wars he inherited, he escalated them. With Pompeo at State and Bolton as national security advisor, greater war on humanity is likely.

“(h)e never met a country he didn’t want to destroy.”

Another said he’s much more than “a run-of-the-mill hawk…He’s never seen a foreign policy problem that couldn’t be solved by bombing.”

“(b)etween Pompeo and Bolton, you’re looking at a neocon foreign policy jacked up on steroids.”

Bolton is militantly hostile to Russia, China, Iran, North Korea, and Syria, among other nations on his target list.

During a recent Fox News interview, he said

“A national security policy that is based on the faith that (nations) like that will honor their commitments is doomed to failure.”

He joined the “Russia meddled in America’s electoral process” crowd straightaway – recently calling Moscow’s (nonexistent) attempt to undermine the 2016 presidential election “a casus belli, a true act of war, and one Washington will never tolerate,” adding:

“For Trump, it should be a highly salutary lesson about the character of Russia’s leadership to watch Putin lie to him.”

“And it should be a fire-bell-in-the-night warning about the value Moscow places on honesty, whether regarding election interference, nuclear proliferation, arms control or the Middle East: negotiate with today’s Russia at your peril.”

“I think in order to focus Putin’s thinking, we need to do things that cause him pain…”

He called for “abrogat(ing) New START between Washington and Moscow, a nuclear arms reduction treaty agreed to in 2009, signed in 2010.

He urged a “very strong response” to the Sergey Skripal incident Russia had nothing to do with.

He advocates confronting nonexistent Chinese “aggressiveness…shak(ing) up” Washington’s relationship with Beijing – urging greater toughness along with closer ties to Taiwan.

“(w)e should expect an even more confrontational approach to China. A trade war may just be the beginning of a broader geopolitical competition.”

Bolton earlier called for military action on Iran and North Korea. In a 2015 NYT op-ed, he headlined: “To Stop Iran’s Bomb, Bomb Iran,” turning truth on its head saying “Iran’s steady progress toward nuclear weapons has long been evident,” adding:

“The inescapable conclusion is that Iran will not negotiate away its nuclear program. Nor will sanctions block its building a broad and deep weapons infrastructure. The inconvenient truth is that only military action like Israel’s 1981 attack on Saddam Hussein’s Osirak reactor in Iraq or its 2007 destruction of a Syrian reactor, designed and built by North Korea, can accomplish what is required.”

In an April 2017 interview with Breitbart News, he urged ending North Korea, saying “the only longterm way to deal with (its) nuclear weapons program is to end (the) regime.”

Bolton bashed Bashar al-Assad, calling him “a satellite of the ayatollahs in Iran”. He said Obama’s “red line” Syria strategy restrained US policy against the government.

“EU diplomats will not sleep well tonight given the latest news.”

“This is the moment the administration has officially gone off the rails.”

“Bolton is so much of an ideologue that I don’t think he would accurately portray the consequences (of policy options) to the president.”

In February 2015, he launched the Foundation for American Security and Freedom (FASF), a neocon advocacy group “committed to restoring and protecting our vital national security interests and preserving our way of life for our children.”

Bolton’s way is through militarism and endless wars of aggression. He considers all sovereign independent states a threat to US security.

With him involved in administration policymaking, escalated wars of aggression are likely, a greater risk of nuclear war instead of stepping back from the brink.