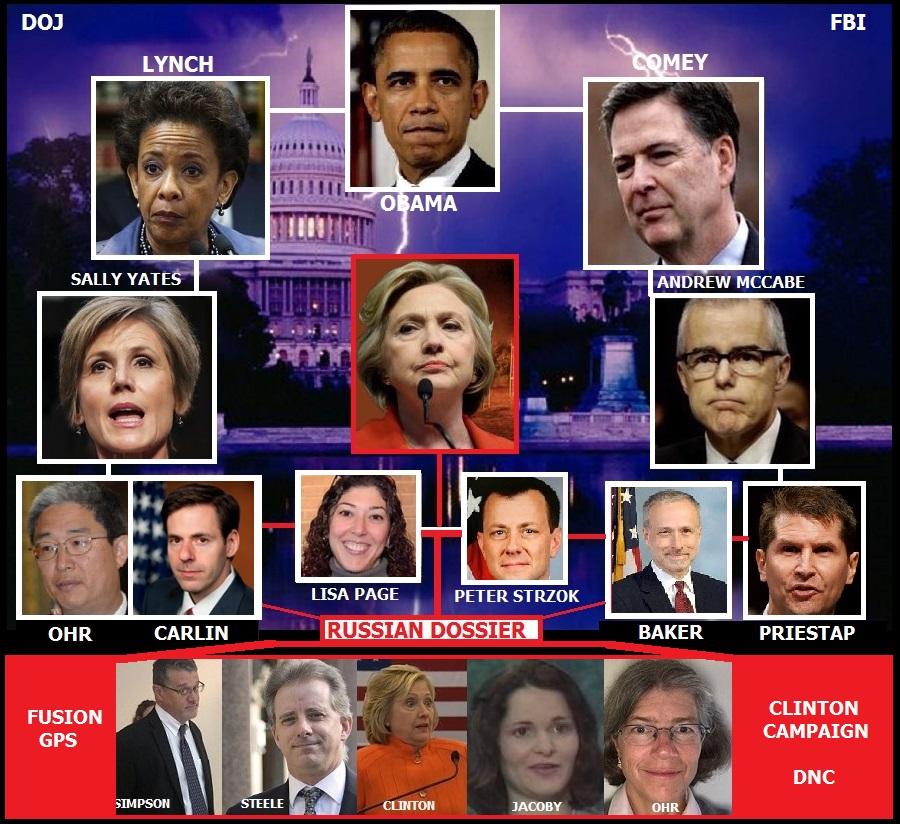 “Send it to a grand jury. Which is where it should have gone, to begin with. Let a grand jury decide whether there is sufficient and compelling evidence that Hillary Clinton committed a myriad of crimes. I guarantee that if an honest grand jury looked at it, she would be indicted.”
— Greg Jarrett- Fox News Legal Analyst

“Holistic analysis of the Justice Department and the FBI’s interconnected and ostensible investigations of Hillary Clinton and Donald Trump amount to the worst abuse of political power in American History related to elections.”
— Tom Del Beccaro- Author and Attorney

“Fired FBI Director James Comey has left a trail of suspicious activity in his wake. Comey now stands out as a key figure in the Deep State’s illicit attempts to target President Trump. And it looks like the Deep State is protecting him still.”
— Tom Fitton- Judicial Watch

In the movie, “3 Days Of The Condor,” a CIA hitman tells Robert Redford’s analyst character that there is a CIA operating within the CIA. A rogue group of agents and analysts who worked autonomously with little oversight from the director, the Congress or the President. Americans would never have believed that in the real world one of our intelligence or law enforcement agencies could become so corrupted and compromised….until now.

Anyone paying attention should know by now that during the Obama administration, there existed a vast conspiracy to steal the Democrat nomination for President from Bernie Sanders and then poison the general election process for President with scurrilous accusations of collusion between Republican nominee Donald Trump and members of his inner circle and the Russian government.

It was Brennan, Clapper, and Comey that claimed the Russian’s interfered with our election, offering no evidence to back up this bold claim. This has been a major talking point for the Democrats for over a year and I believe that it was just part of the plan to destroy Trump. MSNBC just hired creepy Brennan, best known for lying to Congress. He should fit right in.

Peter Schweizer, the author of the excellent book, “Clinton Cash,” said to Hannity, on what would happen if Hillary gets off. “Can you imagine if in a couple of years the Secretary of Defense decided to set up a foundation, and said, “I’m going to take all this foreign money from interested party’s and my spouse is going to go out and give all of these paid lectures, and there’s not a thing you can do to stop it, because the Clinton’s did it and nobody objected to it then. So this goes to the heart of the integrity of our national security system and the decisions that are made”.

These traitors are just the tip of the iceberg of high-level government officials who put their careers on the line to thwart the will of the people and destroy a duly elected President. There is now evidence that Strzok and Lisa Page were keeping Obama apprised of everything they were doing, which all appears to have been unethical and illegal. I believe that Obama was deeply involved and probably helped orchestrate this entire operation. Why is no one asking Obama what he knew? I’m guessing a lot.

The Justice Department under Eric Holder and Loretta Lynch and the FBI under Comey operated as fixers to keep Hillary Clinton out of prison blocking serious inquiry into arming Middle East terrorists in the Benghazi fiasco, the “Fast and Furious” gun-running operation, the Uranium-One scandal, the e-mail scandal, the corrupt Clinton Foundation and now the attempt to destroy the Trump Presidency with a mountain of lies and a bogus dossier that we now know was paid for by the Clinton campaign.

10 of the 11 Foreign Intelligence Surveillance Court (FISA) Judges were appointed by Barack Obama, as reported by Kyle Eidson from Media Equalizer. The judge who approved the surveillance on the Trump team based on the bogus dossier did so after another judge had already turned it down. He is Rudolph Contreras. Appointed by Obama, the son of Cuban immigrants and more than likely an anchor baby himself.

We are told that so-called Trump associate Carter Page was a suspected Soviet agent and this was part of the evidence used for the FISA warrant on the entire Trump team. The “Conservative Treehouse” has reported that Page was no Soviet agent but was working as an undercover employee (UCE) for the FBI from 2013 to 2016. Why is no one talking about this fact? The FBI knew Page was no Soviet agent, he was the excuse they used to open a wider spying operation against Trump and his team.

Page worked undercover, wearing a wire to help the Bureau build a case against a Russian operative by the name of Evgeny Buryakov. In March of 2016, Carter Page was still working for the FBI. In October 2016 the FBI told a FISA Court that US Naval Academy graduate and FBI employee Carter Page was a Soviet spy in order obtain a warrant to spy on the Trump team. Dopey Democrat pundits are still lying daily saying Page was under surveillance in 2013 because he was a suspected Soviet spy.

Page had finagled his way into a meeting with the Trump camp before the election and admits he never met Trump. No matter it was enough to link him with the Trump campaign and reason enough for the corrupt Obama administration to push ahead with their subversive and traitorous plan to orchestrate a coup after Trump won and impeach the President as soon as they could. Despite there being no evidence of collusion and more evidence of malfeasance on the part of the Marxists on the left emerging daily, the majority of the mainstream media has refused to accurately report this story.

John Solomon and Alison Spann from “The Hill” reported that Hillary Clinton and the Obama administration are still under investigation in the Uranium One scandal that was stalled when FBI whistleblower William Campbell was effectively gagged after being forced to sign a non-disclosure agreement by the Loretta Lynch Justice Department. Charges of espionage, bribery, and extortion in a Russian scheme to take control of US Uranium interests were covered up at the highest levels of the Obama administration.

Campbell turned over thousands of pages of documents and damning evidence years ago to Comey who covered it up. Robert Mueller and current Deputy Attorney General Rod Rosenstein were in on this deal up to their eyeballs and so was Jeff Sessions. Glen Canady is reporting that there is a good reason Sessions has been covering this whole thing up since taking office.

Despite Sessions pleading ignorance to Congress on details of the Uranium One criminality, Canady reports that as a ranking member of the Senate Judiciary Committee in 2010 Sessions was briefed about the illegal activities of Uranium One and their efforts to control all U.S. Uranium reserves.

Frankly, if we had an Attorney General who was really interested in law and order we would already have a special counsel appointed. He would have exercised subpoena power, and deposed witnesses by now. He wouldn’t be slow-walking documents requested by Congress a year ago, and we wouldn’t still have to listen to the smug, bug-eyed, lying Congressman from California, Adam Schiff.

The mainstream media has mostly ignored the recently released memo from Senator Chuck Grassley(R-IA) that confirms everything in the Nunes memo and also confirms that Deep State puppet’s “Shifty” Schiff and dopey Eric Swalwell are the two biggest liars in Congress.

The Department of Justice Inspector General, Michael Horowitz, after a year-long probe, will release his report on the DOJ and FBI’s mishandling of the e-mail server investigation that exonerated Hillary Clinton before the sham investigation was completed. If this is an honest report it should result in indictments. If not the public will see through the charade and Trump will lose all credibility.

Jeff Sessions is compromised, ineffective, and the worst Attorney General in our history. Trump needs to fire Sessions and Rosenstein but is likely afraid of the backlash in this hostile environment. The majority of Americans want to see these traitors frog marched to prison in chains and won’t be assuaged with another dead-end investigation with no arrests or convictions.

*Patrick J. McShay is a writer and researcher whose articles have appeared on thetruthseeker.co.uk, rense.com, whatreallyhappened.com, blacklistednews.com, beforeitsnews.com, stateofthenation2012.com, davidicke.com, themillenniumreport.com, operationdisclosure.blogspot.com, sgtreport.com, rumormillnews.com and jamesfetzer.blogspot.com among others. His articles have been translated into a number of languages including French, German, Spanish, Chinese and Dutch.