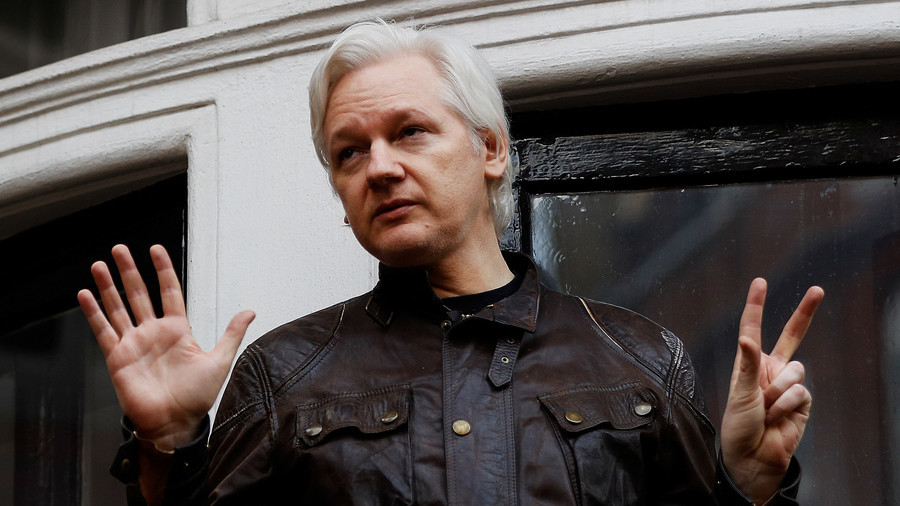 Julian Assange on the balcony of the Ecuadorian Embassy in London. © Peter Nicholls / Reuters

‘More records than the KGB’: Cryptic Assange tweet ignites concern for his wellbeing

A Julian Assange tweet featuring a 60 character code and a YouTube link to a popular rap song has sparked a frenzy of speculation about the meaning of the message and the wellbeing of the WikiLeaks founder.

The 46-year-old published the tweet in the early hours of Monday morning. The peculiar post, which lacked any apparent context, triggered a flurry of speculation on Twitter and on message boards.

Many wondered if Assange had died and the code was a “dead man’s switch” which would release the organization’s “insurance” files, while others said it was an encryption key signalling that WikiLeaks was set to release a fresh batch of leaked files.

An encryption key is a random collection of numbers and figures used for protecting and unlocking data. The longer the key is, the harder it is to crack. The string can be unravelled into its original form with the right key.

Assange’s choice of song has also inspired much theorizing among WikiLeaks watchers. The popular MIA number contains numerous interesting lyrics such as “If you catch me at the border I got visas in my name,” and “I’ve got more records than the KGB, So, uh, no funny business”.

There are also references to “pirate skulls and bones” and dozens of gunshot and cash register noises on the track. Many wondered who exactly Assange could be targeting with such references.

Did you catch the skull and bones?

The Ecuadorian Embassy in London, where Assange has resided since 2012, was unable to comment on the WikiLeaks founder’s wellbeing when contacted by RT.com on Monday.

The message comes following a strange week for Assange on Twitter. On Christmas Day, his account was mysteriously deleted and the US Navy tweeted: “Julian Assange” from its official profile. WikiLeaks even took the step of confirming that Assange was fine. His account was restored later in the day.

Despite some oddities from the US Navy and Twitter today and increased physical surveillance @JulianAssange's physical situation at the embassy remains unaltered–confined without charge in violation of two UN rulings requiring the UK to set him free.https://t.co/ne7cQ2Uryw

While Monday’s message seemed bizarre, it’s not the first time WikiLeaks has published lengthy character codes on Twitter. In October 2016, the organization published three “pre-commitments” regarding then-US Secretary of State John Kerry, Ecuador, and the UK’s Foreign and Commonwealth Office.

In that instance, Gizmodo reported that the “pre-commitments” were a mechanism to ensure that unreleased information isn’t tampered with, as altering the information would also change the codes. Whistleblower Edward Snowden has also used the tactic, tweeting, and subsequently deleting, a similar message in August 2016.