US Empire Is Running The Same Script With Iran That It Ran With Libya, Syria

US Empire Is Running The Same Script With Iran That It Ran With Libya, Syria

Two weeks ago a memo was leaked from inside the Trump administration showing how Secretary of State and DC neophyte Rex Tillerson was coached on how the US empire uses human rights as a pretense on which to attack and undermine noncompliant governments. Politico reports:

The May 17 memo reads like a crash course for a businessman-turned-diplomat, and its conclusion offers a starkly realist vision: that the U.S. should use human rights as a club against its adversaries, like Iran, China and North Korea, while giving a pass to repressive allies like the Philippines, Egypt and Saudi Arabia.
“Allies should be treated differently — and better — than adversaries. Otherwise, we end up with more adversaries, and fewer allies,” argued the memo, written by Tillerson’s influential policy aide, Brian Hook.

With what would be perfect comedic timing if it weren’t so frightening, Iran erupted in protests which have been ongoing for the last four days, and the western empire is suddenly expressing deep, bipartisan concern about the human rights of those protesters. 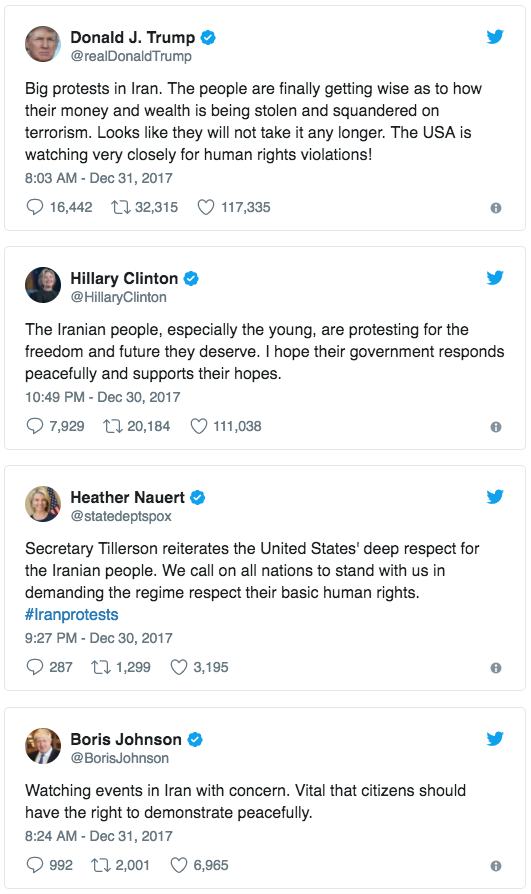 So we all know what this song and dance is code for. Any evil can be justified in the name of “human rights”.

In October we learned from a former Qatari prime minister that there was a massive push from the US and its allies to topple the Syrian government from the very beginning of the protests which began in that country in 2011 as part of the so-called Arab Spring. This revelation came in the same week The Intercept finally released NSA documents confirming that foreign governments were in direct control of the “rebels” who began attacking Syria following those 2011 protests. The fretting over human rights has occurred throughout the entirety of the Syrian war, even as the governments publicly decrying human rights abuses were secretly arming and training terrorist factions to murder, rape and pillage their way across the country.

We’ve seen it over and over again. In Libya, western interventionism was justified under the pretense of defending human rights when the goal was actually regime change. In Ukraine, empire loyalists played cheerleader for the protests in Kiev when the goal was actually regime change. And who could ever forget the poor oppressed people of Iraq who will surely greet the invaders as liberators?

In 2007 retired four-star General Wesley Clark appeared on Democracy Now and said that about ten days after 9/11 he learned that the Pentagon was already making plans for a completely unjustified invasion of Iraq, and that he was shown a memo featuring a plan to “take out seven countries in five years, starting with Iraq, and then Syria, Lebanon, Libya, Somalia, Sudan and, finishing off, Iran.”

So it’s an established fact that the neocons have had Iran in their crosshairs for a good long time.

This is all coming off the back of the nonstop CIA/CNN narrative being advanced that Iran is a top perpetrator of state-sponsored terrorism, which is just plain false. I have a lot of Trump-supporting followers, and I would like to stress to them that the group of intelligence veterans who authored this memo about Iran is the same group who released a memo dismantling the bogus Russiagate narrative; these are good people and you can trust them. I encourage you to read it.

Iran, the Number One State of Sponsored Terror with numerous violations of Human Rights occurring on an hourly basis, has now closed down the Internet so that peaceful demonstrators cannot communicate. Not good!

Trump is lying when he says Iran is “the Number One State of Sponsored Terror”. This is the same exact script they run over and over and over again, and people are falling for it again like Charlie Brown and the football. It is nonsensical to believe things asserted by the US intelligence and defense agencies on blind faith at this point, especially when they are clearly working to manufacture support for interventionism in a key strategic location. In a post-Iraq invasion world, nothing but the most intense skepticism of such behavior is acceptable.

Luckily, because a full scale invasion of Iran would be far more costly and deadly than the invasion of Iraq, support for this will need to be manufactured not just in America but within an entire coalition of its allies. This will be extremely difficult to do, but by God they are trying.

Please keep your skepticism cranked up to eleven on this Iran stuff, dear reader, and be very loudly vocal about it. My Trump-supporting readers especially, I implore you to think critically about all this and look closely at the similarities between the anti-Iran agenda and the other interventions I know you oppose. Together we can kill this narrative and spare ourselves another senseless middle eastern bloodbath.