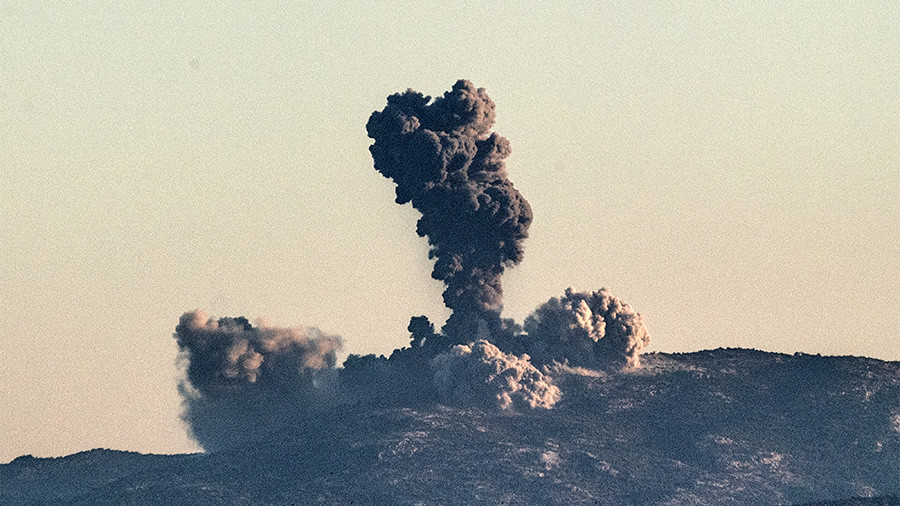 Turkish jet fighters hit the People’s Protection Units (YPG) positions at the Syrian side of the border at Hassa in Hatay near the Syria border on January 20, 2018 © Bulent Kilic

“As of this moment our brave Armed Forces have started the aerial offensive to eliminate the PYD and PKK and [Islamic State] elements in Afrin,” Yildirim said.

Turkey’s General Staff has officially declared the start of the operation, dubbing it ‘Operation Olive Branch,’ according to a statement cited by Turkish newspaper Sol.

AP journalists at the Turkish border reported seeing at least five jets heading toward Afrin. Also sighted was a convoy of buses, believed to be carrying Syrian opposition fighters, and trucks mounted with machine guns.

A senior Kurdish official said that Turkish warplanes had struck residential parts of Afrin, forcing people to retreat inside their homes and in shelters, Reuters reported. Several wounded people arrived at a local hospital, according to Hevi Mustafa, a top member of the civilian administration that governs the area.

Turkish Foreign Minister Mevlut Cavusoglu has discussed the military offensive with US Secretary of State Rex Tillerson, Turkish officials said. Ministry officials earlier said Tillerson had requested a telephone conversation with his Turkish counterpart. Ankara’s Chief of Military Staff, Hulusi Akar, has also spoken with his US and Russian counterparts, according to Turkish media reports.

Turkey launched “Operation Olive Branch” in accordance with its rights deriving from the international law& the right of self defence placed in the UN Charter.The operation doesn’t target civilians &innocent Syrians. It only aims at terrorists groups (DEASH,PYD/YPG) & terrorists.

The US-backed Syrian Democratic Forces (SDF) have meanwhile accused Turkey of using cross-border shelling as a false pretext to launch an offensive into Syria, according to Reuters. The SDF, an alliance of Kurdish and Arab militias fighting Islamic State (IS, formerly ISIS), said it will have no choice but to defend itself if attacked. The alliance controls areas in Syria’s east and north.

Russia’s Foreign Ministry said Moscow is closely following the situation, citing concerns over recent developments in the area. The ministry’s statement called on all sides in the conflict to exercise restraint.

It comes after Turkish President Recep Tayyip Erdogan said earlier on Saturday that Ankara had “de facto” begun its operation against Kurdish forces in Afrin. He said the operation would be “followed by Manbij,” referring to the Kurdish-controlled town in northern Syria.