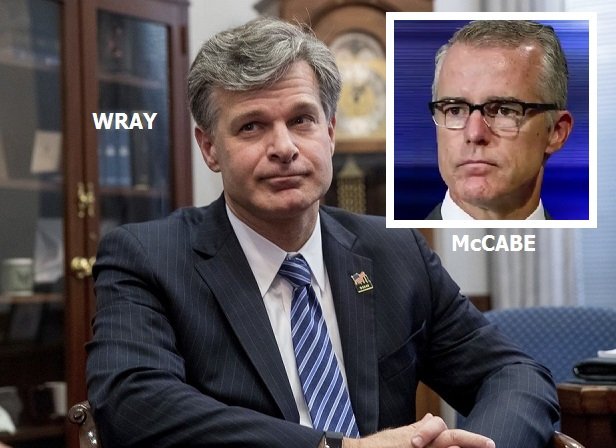 Hannity sat down once again with journalist Sara Carter, whose sources say McCabe may have instructed FBI agents to alter their “302” forms – the paperwork an agent files after interviewing someone:

6) The 302 reveals the content of interview as well as identify ALL PARTICIPANTS. The 1023 outlines who met who, where, when, and why.

Carter: What we know tonight is that FBI Director Christopher Wray went Sunday and reviewed the four-page FISA memo. The very next day, Andrew McCabe was asked to resign. Remember Sean, he was planning on resigning in March – that already came out in December. This time they asked him to go right away. You’re not coming into the office. I’ve heard rep[orts he didn’t even come in for the morning meeting – that he didn’t show up.

Hannity: A source of mine told me tonight that when Wray read this, it shocked him to his core.

Sara Carter: Shocked him to his core, and not only that, the Inspector General’s report – I have been told tonight by a number of sources, there’s indicators right now that McCabe may have asked FBI agents to actually change their 302’s – those are their interviews with witnesses. So basically every time an FBI agent interviews a witness, they have to go back and file a report.

Hannity: Changes? So that would be obstruction of justice?

Carter: Exactly. This is something the Inspector General is investigating. If this is true and not alleged, McCabe will be fired. I heard they are considering firing him within the next few days if this turns out to be true.

Carter said that McCabe “quitting” is just the beginning, and that more resignations will be coming.

As we reported yesterday, McCabe was “removed” from his post as deputy director, “leaving the bureau after months of conflict-of-interest complaints from Republicans including President Trump.” Several media outlets reported that McCabe is using his remaining vacation days to go on “terminal leave” and that his official retirement from the agency won’t happen until March, allowing him to collect the full pension.

And as we noted last week, FBI Director Wray threatened to resign after being pressured by AG Jeff Sessions.

Around the time of the reports of his impending retirement, McCabe had spent several marathon sessions answering questions from Congressional committees behind closed doors.

It was expected that McCabe would hang on until early March, when he would become eligible for his full pension. It’s unclear why he’s choosing to step down early.

According to Axios, McCabe may be leaving in anticipation of the release of an inspector general’s report on how the FBI handled the Clinton email investigation.

.@AriFleischer: "[I] have regularly defended Bob Mueller. I used to defend James Comey on his investigation of Hillary. I can no longer do that. I think the investigation into Hillary has turned out to be a sham…In this instance, the FBI has let us all down." #Hannity pic.twitter.com/e5dhneBhrt