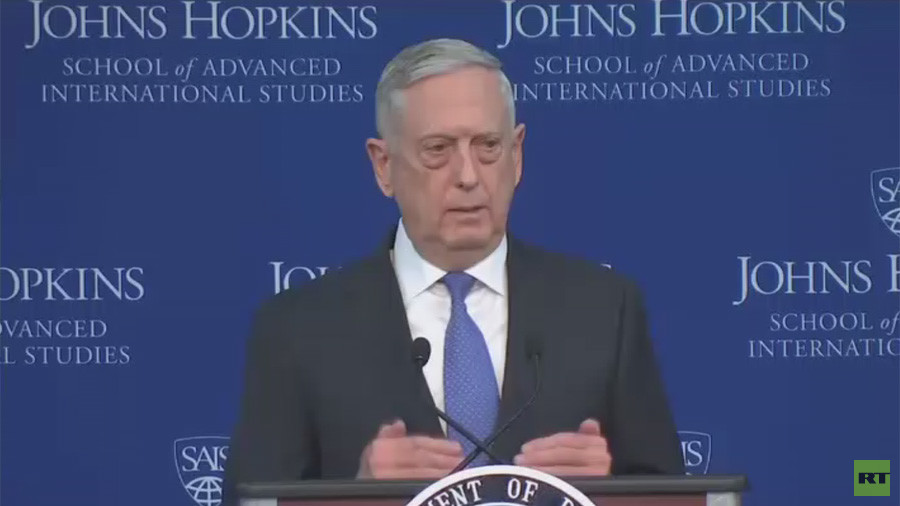 ‘Work with our diplomats or deal with US military’ Mattis warns, unveiling new defense strategy

The US will counter any “threat to America’s democracy experiment” in the world, if necessary with military force, the Pentagon chief threatened. Jim Mattis said Russia and China are potential adversaries for the US.

Unveiling the Trump administration’s new National Defense Strategy, Mattis said the main focus for US defense was competition with resurgent powers Russia and China which, he said, want to impose an authoritarian model of government on other nations.

“We are facing increased global disorder, characterized by decline in the long-standing rules-based international order—creating a security environment more complex and volatile than any we have experienced in recent memory. Inter-state strategic competition, not terrorism, is now the primary concern in US national security,” says the summary of the new NDS published simultaneously.

The strategy says that the combination of “a robust constellation of allies and partners” and “a more lethal, resilient, and rapidly innovating Joint Force” will help sustain American influence.

He said that ISIS has been defeated, but “violent extremist organizations” including Hezbollah and Al-Qaeda continue to be a threat to America and a matter of concern for the Department of Defense.

But the most damage was done to the US military over the past 16 years not by an adversary but by the defense spending cuts and lack of predictability of the defense budget. He called on US lawmakers to address that problem.