Russian Parliament To Ban Access To All US Reporters 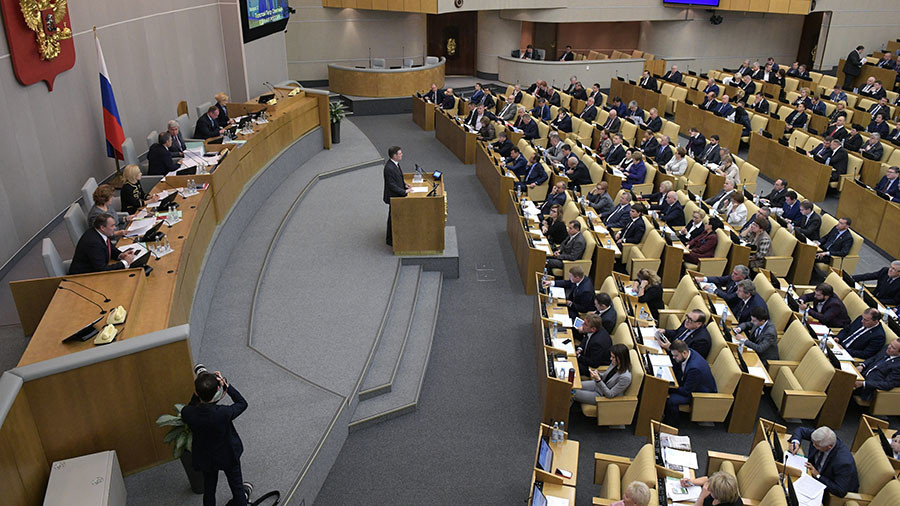 Russian lower house to ban access to all US reporters – lawmaker

The head of the State Duma Regulations Committee has said that the Russian Lower House will ban all visits by journalists working for US mass media. This is in reply to the US Congress’s hostile moves towards Russia’s RT America television.

“By our decision we are offering this move for the consideration of the State Duma Council and plenary session. We are expressing our attitude to the inadmissibility of attacks on democratic values, freedom of speech and the right to receive objective information,” MP Olga Savastyanova told RIA Novosti on Friday.

The lawmaker added that she expected the corresponding motion to be passed on the State Duma plenary session on Wednesday and come into force before the end of next week. Federal lawmakers also plan to approve of a recommendation to Russian regional legislatures to introduce similar measures.

Savastyanova emphasized that the ban was a reciprocal action introduced after RT America was stripped of accreditation with the US Congress.

According to current regulations any foreign reporter must receive an accreditation with the Foreign Ministry to work in Russia. Once received, this document grants free access to the Parliament.

In late November this year a congressional committee in the US revoked RT America’s accreditation on Capitol Hill, citing its ‘foreign agent’ status. A short time before this the US Justice Department ordered RT America to register as a foreign agent or face harsh punishment, such as frozen assets and the arrest of the head of the company. On November 10, RT America (officially registered as T & R Productions LLC) filed as a foreign agent with the Department of Justice.

Russia replied with a bill ordering media outlets operating in Russia but funded from abroad to register as ‘foreign agents.’ The law applies to any foreign organizations that operate with or without registering as a company if they are engaged in spreading printed, audio, audio-visual, or any other content prepared for an unlimited group of people. The condition for being recognized as “foreign mass media executing the functions of a foreign agent” is described as “receiving monetary funds or other property from foreign states, government agencies, foreign-based and international organizations, foreign citizens and persons without citizenship or any other persons acting on behalf of foreign citizens and organizations.”

The bill does not mention any particular companies or countries, but in mid-November, the Russian Justice Ministry officially notified nine US-funded media outlets, including Voice of America and Radio Free Europe/Radio Liberty, of the possible need to comply with the new legislation.