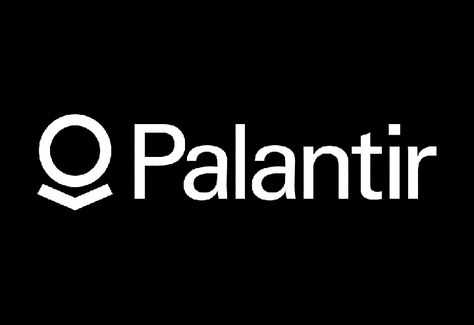 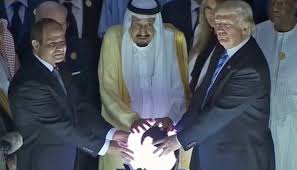 “Those in the conspiracy research field are familiar with PROMIS software – the back-door spyware platform used by American and Israeli intelligence organizations to spy on police departments and government agencies around the globe for the better part of 20 years, culminating in the hack of the FAA on 9-11 and facilitating the horrible deeds of that tragic day. Well now there’s a new artificial intelligence software tool on the block that makes PROMIS look like Atari’s ‘Space Invaders’ (circa 1980). The name of it is Palantir, and its power to hack global Big Data systems and model human behaviour using complex predictive algorithms is unprecedented. And because it operates on blockchain technology, it is unhackable. [Above: Trump at the Saudi ‘Global Center For Combatting Extremist Ideology’ in Riyadh, which uses Palantir software.”

Observers point out that Palantir is as powerful as Google, Facebook, and Twitter combined. The software platform specializes in big data mining, machine learning, artificial intelligence, quantum computing, human behaviour algorithms, and the like, all to create models and simulations of society – from individuals to families to communities to nations. It works with banks, law enforcement, government agencies, and other human profile compilers to compile the ultimate databases on individuals and groups. The company behind it is private, and is in fact a CIA cut-out. Founded in 2004, it has received big funding from InQtel (a CIA venture capital fund), the Malaysian government, Peter Thiel (founder of PayPal), and… Jared and Josh Kushner.

Thiel and the Kushners, it turns out, have been long-time friends. Thiel has recently made the headlines for his investing in “Ambrosia” – the fountain of youth – a project to prolong human life by injecting the blood of young people in the body. Thiel and his gang were also behind the funding of Alibaba – the Chinese super-conglomerate. They also worked with the Chinese government to discover and root out the Chinese Dark web, which was being used to circumvent government censorship. Thiel’s close relationship to the Kushners is suggestive that he may, in fact, be President Trump’s “Shadow President.”

Palantir is similar to Maltego, another backdoor software platform resembling Promis. The CIA has a system called PRISM (as revealed recently by Wikileaks), used for sifting Big Data hacks to build profiles on “persons of interest”. While running for president, Trump is known to have employed the Cambridge Analytics system to analyze the American political landscape with incredible detail, telling him what to say and where to say it for maximum impact. Some attribute his sudden rise to power to this artificial intelligence software system. Prism, Maltego, Prism, Promis, and Cambridge Analytics are all software systems being used to track human beings by the government and law enforcement agencies of the US and its allies.

M.I.T. used CIA grant money to develop the Cambridge Analytics system. Palantir is just the latest incarnation of these control systems. The system manages and tracks individuals, and can even predict the future using advance-monitoring AI. It deploys something called the AQ – adversity quotient – to quantify risks associated with individuals or events, based on algorithmic assessment of all relevent data.

Palantir now provides the backbone of virtually every agency in the US government and its allies – except the US Army. The Army has its own AI, called ECLIPSE, developed by Raytheon. It doesn’t want Palantir’s ever-awakening artificial intelligence to contaminate its systems. The world’s first quantum computers are being deployed in the service of these ominous systems. DynCorp and DARPA are teaming up to outdo all of this with their own Artificial Intelligence system in the service of the Pentagon.

Assembling vast sums of data into working models of society in real-time, Palantir can predict the future. Palantir is so complex that it is now being used to manipulate politics and media on a national level.
Using subversive algorithms, it is helping to shape and control the public narrative. Some are suggesting that it is directing the Deep State’s war against Trump. Others have suggested that Trump himself is using Palantir to direct his own divide-and-conquer strategy of control.

David Gelernter was one of the early pioneers in the software development of all these “top-down” systems and an early proponent of predictive algorithms.Quinn Michaels is one of the principal conspiracy researchers into all of this. (See his site: indra.ai) Eliana Johnson is a journalist also keeping a close eye on this. Jason Goodman and George Webb of the “Awan Brothers Saga” fame, are also trying to get up to speed on all of this, noting that the Awan brother’s father – Mohammed Shah – was involved in a precursor to all this, the Iridium system. Watch the following video to get up to speed yourself:

Do you remember Trump’s first big overseas trip to Saudi Arabia back in May? Recall the photos of Trump and the Saudi King with their hands on a crystal ball? The scene resembled something out of the Xmen movies with their ‘Cerebro’ technology. Did you catch what that was all about? Well it turns out that crystal ball was operating a Palantir-based system!

The room in Riyhad had a sign on the wall reading: Global Centre for Combatting Extremist Ideology. In other words, it was a command-and-control centre for tracking and disabling “bad guys”, as defined by the state of Saudi Arabia. If similar systems are coming to a neighbourhood near you – and they are – you might want to put on your tinfoil hat. The deriders of “conspiracy theorists” might start calling you derogatory names… and may even call the Thought Police at the Palantir-powered Ministry of Truth to claim you need to be watched carefully. Then again, you probably already are.