FLASHBACK: Two Israelis arrested with bombs in the Mexican Congress 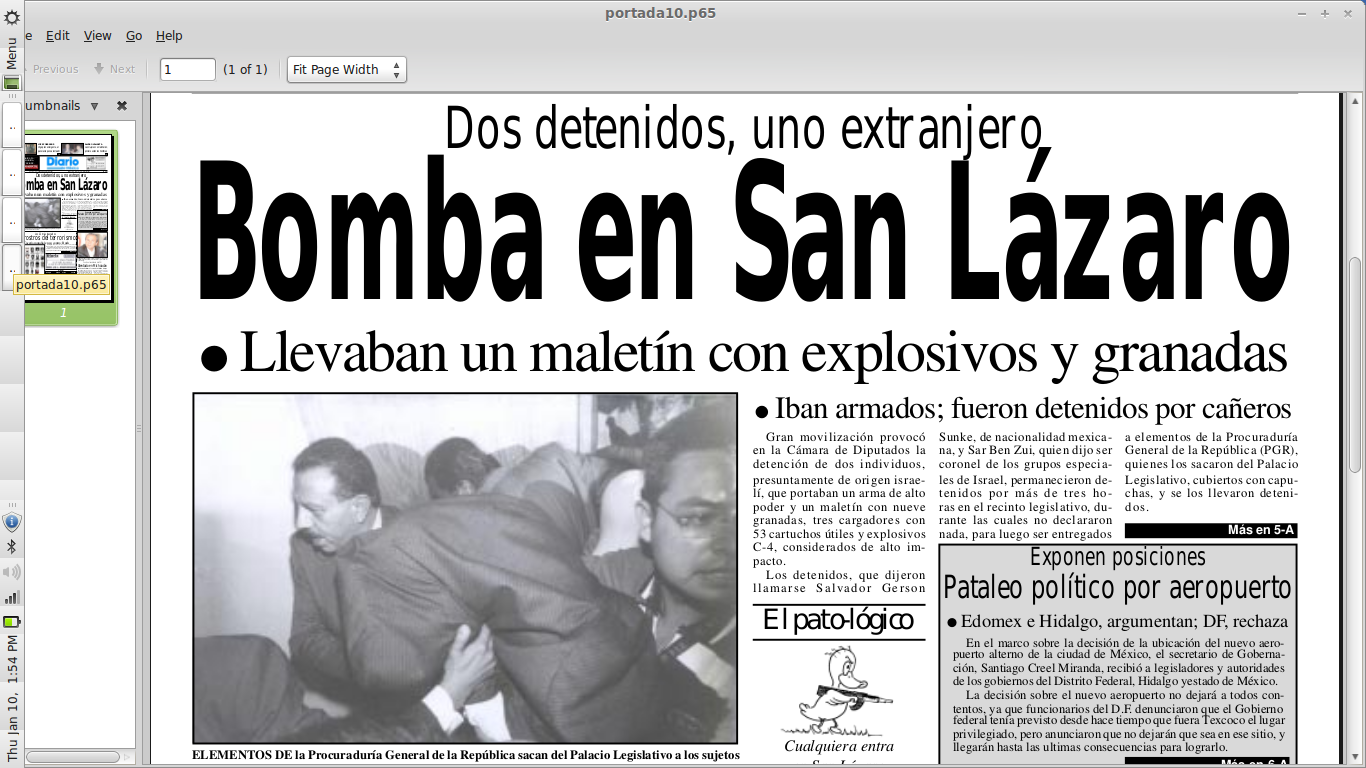 FLASHBACK: Two Israelis arrested with bombs in the Mexican Congress

As reported in La Vox De Aztlan, two men posing as press photographers, one of them a former Israeli Colonel and Mossad agent, were arrested INSIDE the Mexican congress on October 10, 2001 armed with 9-mm pistols, nine grenades, explosives, three detonators, and 58 bullets, but were released following intense pressure from the Israeli Embassy.  “We believe that the two Zionists terrorist were going to blow up the Mexican Congress. The second phase was to mobilize both the Mexican and US press to blame Osama bin Laden. Most likely then Mexico would declare war on Afghanistan as well, commit troops and all the oil it could spare to combat Islamic terrorism.”

This morning La Voz de Aztlan had a personal telephone interview with the Mexican Congressional Press Secretary, Lic. Adriana Lopez, and verified the arrest of the two Israelis after they had entered through the highly secured front entrance of the Palacio Legislativo de San Lázaro. She stated to La Voz de Aztlan that the two terrorists had taken advantage of a situation that occurred around 1700 hours of Wednesday October 10 when a large contingent of Sugar Industry Unionists were entering through the metal detectors. The two Israelis followed about 50 of the unionists to the office of the President of the Mexican Congress Beatriz Paredes. The two Israelis were first pretending to be press photographers but called the attention of the sugar unionists because of their nervous and out of the ordinary behavior. About ten of the unionists confronted them and observed that they were carrying guns and and what looked to them to be explosives. They held the two Israelis until Official Congressional Security personnel took them into custody. The head of Congressional Security Salvador Alarcón verified that the Israelis had in their possession nine hand grenades, sticks of dynamite, detonators, wiring and two 9mm “Glock” automatics.

Mexican Congressional Press Secretary Lic. Adriana Lopez informed La Voz de Aztlan in the telephone interview that Congressional Security then turned the terrorists Salvador Guersson Smecke, age 34, and Saur Ben Zvi, age 27, to the Procuraduría General de la República (Mexican Department of Justice) which is headed by Mexican Army General Rafael Marcial Macedo de la Concha. Initial reports by the Procuraduría General de la República (PGR) were that both Israelis worked for a private security agency and that they both had gun permits. It turned out that there is no connection of either suspect to any private security agency. The PGR has released the retired Israeli I.D.F. colonel with the official explanation that he had a legal permit to carry a gun. They also released the illegal Israeli immigrant on about $4000 bail and the case turned over to the Mexican immigration authorities. Mexican Congressional Press Secretary Lic. Adriana Lopez was surprised to hear from La Voz de Aztlan of the release of the two Israelis.

La Voz de Aztlan has also learned that the Israeli Embassy used heavy handed measures to have the two Israelis released. Very high level emergency meetings took place between Mexican Secretary of Foreign Relations Jorge Gutman, General Macedo de la Concha and a top Ariel Sharon envoy who flew to Mexico City specially for that purpose. Elías Luf of the Israeli Embassy worked night and day and their official spokeswoman Hila Engelhart went into high gear after may hours of complete silence. What went on during those high levels meetings no ones knows, but many in Mexico are in disbelief at their release. Guns and any kind of explosive is highly illegal for Mexican citizens and the fact that these two Israelis had them inside the Mexican Congress makes their release highly suspect. What is really going on? Jorge Gutman, the Mexican Foreign Secretary, has very strong Zionist connections and himself is of Jewish descent. Mexican Army General Macedo de la Concha has strong connections to the U.S. Military Industrial-Complex and through this to the Israeli Defense Forces. Have any of these connections influenced the decision to release the two Zionist terrorists?

The initial arrests of the two Israelis inside the Palacio Legislativo de San Lázaro made top news on Mexico City television and radio on the evening of October 10. TV Azteca had extensive coverage on the first night and on the following day. La Cronica de Hoy Newspaper and El Universal Newspaper both covered the incident the following two days but now it seems that there is a lack of reports. The PGR has a Press Bulletin on their official website but they have made no updates. No U.S. media has made any mention, that we know, except one by USAJewish.com. Pravda of Moscow has a note of the initial La Voz de Aztlan article at:http://english.pravda.ru/main/2001/10/13/17982.html

What were the Israelis up to? We think we know. The Vicente Fox government has been very careful of involving Mexico in a war against Islam. The Mexican population as well as the two major opposition political parties, the PRI and the PRD will not allow it. President Bush and the U.S. Zionists want Mexico fully involved in the war principally because if things get tough in the middle east and the oil rich Arabs leave the coalition, the U.S. military machine is going to need alternative sources of oil and PEMEX is just across the border. We believe that the two Zionists terrorist were going to blow up the Mexican Congress. The second phase was to mobilize both the Mexican and US press to blame Osama bin Laden. Most likely then Mexico would declare war on Afghanistan as well, commit troops and all the oil it could spare to combat Islamic terrorism.