Julian Borger in Washington and Peter Beaumont in Jerusalem
The Guardian

Donald Trump has defied overwhelming global opposition by recognising Jerusalem as the capital of Israel, but insisted that the highly controversial move would not derail his own administration’s bid to resolve the Israeli-Palestinian conflict.

In a short speech delivered at the White House, Trump directed the state department to start making arrangements to move the US embassy from Tel Aviv to Jerusalem – a process that officials say will take at least three years.

“I have determined that it is time to officially recognize Jerusalem as the capital of Israel,” Trump said. “While previous presidents have made this a major campaign promise, they failed to deliver. Today, I am delivering.”

Trump said: “My announcement today marks the beginning of a new approach to the conflict between Israel and the Palestinians.”

The president’s announcement provoked condemnation from US allies, and a furious reaction from Palestinian leaders and the Muslim world. Within minutes of Trump’s announcement, US embassies in Turkey, Jordan, Germany and Britain issued security alerts urging Americans to exercise caution.

The United Nations Security Council is likely to meet on Friday to discuss the move, after a request by eight countries on the 15-member body, including the UK, Italy and France.

Trump stressed that he was not stipulating how much of Jerusalem should be considered Israel’s capital. Palestinians see East Jerusalem as the capital of their own future state, and Trump did not rule out a future division of the city.

“We are not taking a position of any final status issues, including the specific boundaries of the Israeli sovereignty in Jerusalem, or the resolution of contested borders. Those questions are up to the parties involved,” the president said.

But the move marks a break with years of US precedent – and with general global opinion, which sees the fate of Jerusalem as a matter for comprehensive “final status” negotiations between Israelis and Palestinians.

British prime minister Theresa May said Trump’s announcement was “unhelpful in terms of prospects for peace in the region”, and said the UK did not intend to follow suit. The French president, Emmanuel Macron, and the German chancellor, Angela Merkel, also condemned the move.

Israel’s government rushed to congratulate Trump for the speech, which the prime minister, Benjamin Netanyahu, described as an “important step toward peace”.

But the Palestinian president, Mahmoud Abbas, said that the US had effectively abdicated its role as a mediator in the region. The chief Palestinian negotiator, Saeb Erekat, said: “President Trump just destroyed any policy of a two-state solution.”

Saudi Arabia on Thursday criticised the decision, calling the move “unjustified and irresponsible”. The move was also condemned by Turkey, Jordan, Egypt and Lebanon.

In a social club in the heart of Jerusalem’s Shuafat refugee camp, young Palestinian men grew increasingly angry as they watched the speech translated into Arabic on a Palestinian television channel.

“This is shit!” shouted a man called Abu Atya. “He’s just said Jerusalem is the capital of Israel. This speech is going to cause big trouble.”

Another man, Hamdi Dyab, grew incredulous and agitated as he watched the speech.

“He’s saying he’s going to move the embassy,” he said. “This is very dangerous speech. Things don’t look good. We are calling for a new intifada.”

Trump argued that continually delaying recognition and the embassy move by signing waivers, as his predecessors had done, had not brought peace any closer.

“After more than two decades of waivers, we are no closer to a lasting peace agreement between Israel and the Palestinians. It would be folly to assume that repeating the exact same formula would now produce a different or better result.”

Trump presented his decision as the recognition of “the obvious” and “the right thing to do”.

“Today, Jerusalem is the seat of the modern Israeli government. It is the home of the Israeli parliament, the Knesset, as well as the Israeli supreme court,” he said. “It is the location of the official residence of the prime minister and the president. It is the headquarters of many government ministries.”

The president suggested that the acknowledgement of Jerusalem’s role in the state of Israel would actually have a positive effect on negotiations.

“This is a long overdue step to advance the peace process and to work towards a lasting agreement,” Trump said, but he did not explain how it would help negotiations in the face of such an angry reaction from Palestinians and their supporters.

Some observers have suggested Trump’s announcement represented a political gift to his close ally Netanyahu, in the expectation of future concessions at the negotiating table – but it was unclear what Netanyahu would offer in return and why the US move was made in advance of substantive talks.

After announcing his order for the state department to start work on moving the US embassy, Trump sat down at a table in the White House diplomatic reception room and did something that seemingly had the opposite effect: signing another presidential waiver on the 1995 Jerusalem Embassy Act, which ordered the transfer of the diplomatic mission from Tel Aviv.

White House officials said there was no contradiction, and that the waiver signing was necessary to prevent a cut in state department funding stipulated by the act until the new embassy is actually opened. They said previous presidents had used the waiver to stop any progress on moving the embassy, while Trump was directing practical work to start.

In his speech, Trump said: “This will immediately begin the process of hiring architects, engineers, and planners, so that a new embassy, when completed, will be a magnificent tribute to peace.” 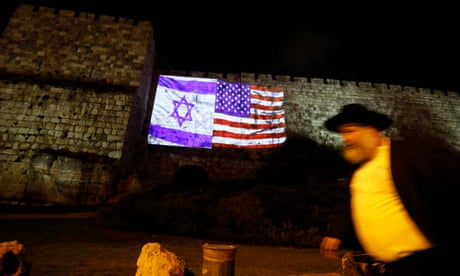 Vice-president Mike Pence stood behind Trump as he delivered his address, symbolising the support of Christian conservatives that Pence represents, but it was unclear how the move squared with the efforts of Trump’s son-in-law Jared Kushner, and his special representative on international negotiations, Jason Greenblatt, to engineer a peace proposal with the support of the Israelis, Palestinians and regional powers like Saudi Arabia.

Peter Welch, a Democratic congressman who has organised briefings with Greenblatt on Capitol Hill, said he was mystified by Trump’s move, as the Kushner-Greenblatt initiative appeared to have been showing promise.

“I thought a trust-building process was underway that was having positive impacts,” Welch told the Guardian after the speech. “But the president woke up and with this provocative announcement threatens to undo everything his administration had been doing to build trust and make progress.

“The president has been going over there establishing good ties with the Sunni states, he obviously has close relationships with the Israeli government, he was making progress even with the sceptics in the Palestinian Authority, and with a single announcement he blows it all up.”