The New York Times Is An Accomplice To Treason: Runs AntiFa Ad Calling For Revolution 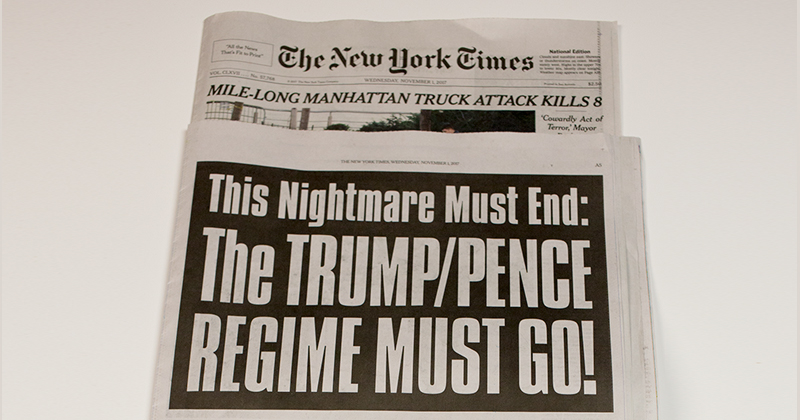 The New York Times Is An Accomplice To Treason: Runs AntiFa Ad Calling For Revolution

The New York Times published a full-page ad calling for a “revolution” to overthrow President Trump on Nov. 4.

The ad, which appears near the front of the newspaper’s national edition, demands nationwide protests that won’t stop until the Trump administration is “driven from power.”

“Join with the thousands who will gather in cities and towns across the country,” reads the ad. “A movement of protests that continue every day and night, growing until we become millions… determined now to stop until this regime is driven from power.”

The ad was written by Refuse Fascism, a communist group funded by George Soros which took responsibility for shutting down a conservative event hosting journalist Milo Yiannopoulos at UC Berkeley in Feb.

It’s ironic how the Times, which operates under the press protections guaranteed by the First Amendment, sold ad space to a group which bragged about denying First Amendment rights to a journalist.

The Times was already under fire for its bias against the Trump administration as revealed by a series of sting videos produced by Project Veritas, which caught the newspaper’s editors discussing how they help set up the media’s anti-Trump narrative.

“I think that one of the things that maybe journalists were thinking about is, like, ‘Oh, if we write about [Trump], about how, like, insanely crazy he is and how ludicrous his policies are, then maybe people will read about it and be, like, ‘Oh, wow, like, we shouldn’t vote for him,’’” the Times’ homepage editor Desiree Shoe said on hidden camera.

The attitudes of the Times’ staff, combined with the Refuse Fascism ad, underscore how the establishment newspaper is not as “professionally neutral” as it claims to be.