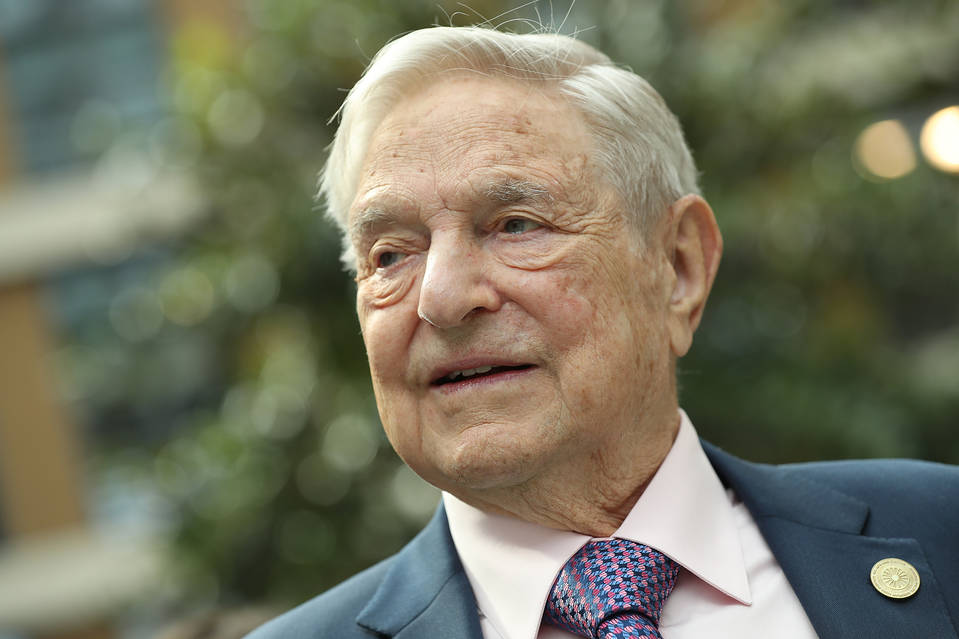 By Juliet Chung and Anupreeta Das
The Wall Street Journal

George Soros, who built one of the world’s largest fortunes through a famous series of trades, has turned over nearly $18 billion to Open Society Foundations, according to foundation officials, a move that transforms both the philanthropy he founded and the investment firm supplying its wealth.

Now holding the bulk of Mr. Soros’s fortune, Open Society has vaulted to the top ranks of philanthropic organizations, appearing to become the second largest in the U.S. by assets after the Bill and Melinda Gates Foundation, based on 2014 figures from the National Philanthropic Trust.

Soros Fund Management LLC’s 87-year-old founder now shares influence over the firm’s strategy with an investment committee of Open Society. Mr. Soros set up the committee and is its chairman, but it is meant to survive him, people familiar with it said.

A new chief investment officer at the Soros firm is less a trader than an allocator of capital to various internal and external asset managers. Unlike past investment chiefs, the official, Dawn Fitzpatrick, doesn’t report to Mr. Soros or others at his firm but to the philanthropy’s investment committee.

Mr. Soros doesn’t plan to trade the billions that now belong to Open Society, according to the people familiar with the situation. Mr. Soros was trading his own money, held separately within the Soros firm, as recently as last year, when he bet—wrongly, it turned out—that stocks would slump after Donald Trump was elected president.

“It’s an ongoing process of migration from a hedge fund toward a pool of capital deployed to support a foundation over the long term,” said Bill Ford, a committee member and the chief executive of General Atlantic LLC, a firm that invests in growth-stage companies.

Though the $26 billion Soros Fund Management was a pioneering hedge fund, it returned outside investors’ money several years ago and became a family office—a type of structure, largely free of regulation, that is increasingly popular with wealthy clans.

Mr. Soros began his giving in 1979 and stepped it up to fight communism across Eastern Europe. In 1984, he set up a foundation in Hungary, the country of his birth, that distributed photocopiers to universities and libraries to break the government’s hold on information.

Having lived under both communism and a Nazi occupation in Hungary, Mr. Soros hoped to foster “open societies” in places where authoritarian governments held power. He named his foundation after a book by the philosopher Karl Popper, one of his teachers, that defended liberal democracies.

Open Society today has a broad mandate driven largely by its founder’s values. It operates through a network of more than 40 foundations and offices in countries from Afghanistan to South Africa. It has funded refugee relief, public-health efforts and programs including a mobile court for gender crimes in the Democratic Republic of the Congo. The philanthropy also advocates for rights of the Roma, one of Europe’s largest ethnic minorities. 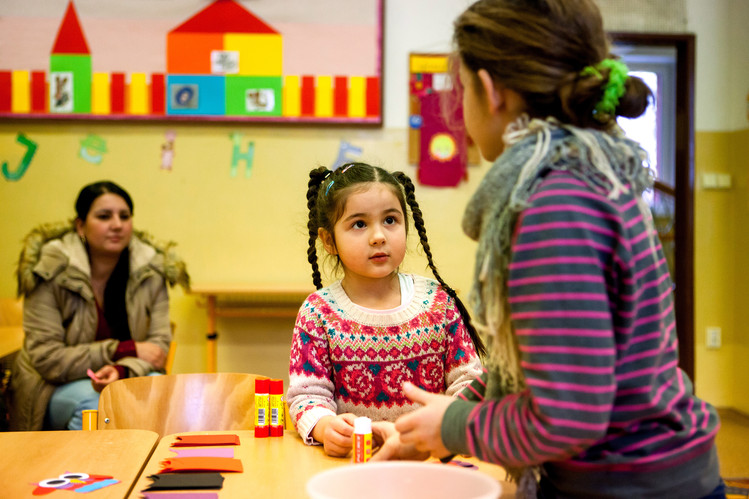 Advocating for the Roma ethnic group is one of Open Society’s projects. Here, a Roma child awaits an enrollment exam at a school in the Czech Republic. PHOTO: BJOERN STEINZ/PANOS FOR THE OPEN SOCIETY FOUNDATIONS

Open Society’s activism has sometimes angered nationalist governments, such as the current one in Hungary, which targeted a university Mr. Soros founded and which has run poster campaigns singling him out for his support of refugees. Mr. Soros has urged developed countries in Europe and elsewhere to share the burden of increased migration from conflict-ridden countries. Anti-Soros politicians in Macedonia, Poland and some other European countries have attacked foreign-funded groups, including Open Society, for what they see as outside interference in their affairs.

In the U.S., where Mr. Soros is a major contributor to liberal and Democratic causes, he is a lightning rod for conservatives. Open Society has supported efforts to overhaul immigration policies and the criminal-justice system, including prisons, and funded mentoring programs for black and Latino young men. It has supported activists working on issues raised by the Black Lives Matter movement.

Mr. Soros funded Latino get-out-the-vote efforts last year and donated to largely Democratic district-attorney candidates around the country. A Hillary Clinton supporter, he was an outspoken critic of Mr. Trump, whose campaign cited Mr. Soros in a closing ad as part of a “global power structure” the ad said disadvantaged the working class. After the election, Open Society said it would spend $10 million to fight hate crimes, a problem Mr. Soros said had been inflamed by the Trump campaign.

In all, Mr. Soros and Open Society have given $14 billion so far, said a foundation spokeswoman.

When it comes to investments, philanthropic foundations typically focus more on preserving capital than maximizing returns, unwilling to tolerate the losses that can accompany high-risk, potentially high-reward trading. Now that Soros Fund Management’s main client is a philanthropy, several people close to the firm say they expect it to curtail its tradition of large “macro” trades—wagers on the direction of currencies, stocks, commodities or interest rates.

Mr. Soros declined to be interviewed. Ms. Fitzpatrick, the new investment chief, said the firm isn’t backing away from macro investing but expects future opportunities to be more fleeting and smaller. “There are fewer currencies, [and] central banks are savvier and more coordinated now,” she said. 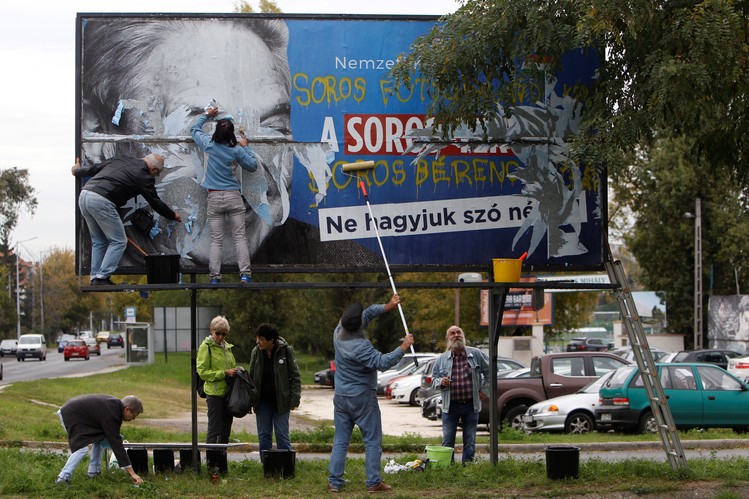 Mr. Soros immigrated to Britain as a youth, studied philosophy and then became a stock trader, before moving to the U.S. and setting up what became Soros Fund Management in 1969.

In a trade that brought him wide attention, he made a giant “short” wager against the British pound in the early 1990s, which paid off when Britain devalued its currency and withdrew from that era’s European Exchange Rate Mechanism. Mr. Soros’s firm earned roughly $1 billion and he was dubbed the man who broke the Bank of England.

A run of rich annual returns hit a pothole in 2000, when the firm’s flagship Quantum fund lost heavily on cratering technology and biotech stocks. Discord with Mr. Soros over the soured tech bets factored in the departure of his investment chief of 11 years, Stanley Druckenmiller, to whom Mr. Soros credited the idea for the pound trade.

That marked the start of continued change atop the firm as chief investment officers cycled through. Some operations also were rejiggered, which ex-employees said was partly to make way for Mr. Soros’s eldest sons. At one point in 2003 Mr. Soros hired Steven Mnuchin, now U.S. treasury secretary, to run a credit business.

Despite regularly telling others he was retired, Mr. Soros occasionally stepped back into active trading, such as during the financial crisis, when he helped guide his firm to big gains. Former employees say some past investment chiefs bristled at how Mr. Soros inserted himself in operations, judging them critically on what they felt was short-term performance.

The longest-serving investment chief of recent years, Scott Bessent, stopped by Mr. Soros’s estate in Southampton, N.Y., one July weekend in 2015 and said he was thinking of leaving to start a hedge fund of his own, adding he would want more authority were he to stay. He didn’t get it. Mr. Bessent soon left, ending a strong run of 4 1/2 years with a $2 billion investment in his new fund from Mr. Soros.

The departure, the fifth by a Soros investment chief in 15 years, coincided with a stepped-up pace of change at the firm. Mr. Soros decided that year to form the Open Society investment committee that now wields power, and his wealth transfers to the philanthropy accelerated around the same time.

That most of his fortune would eventually go to Open Society has long been known, but Mr. Soros previously funded it with annual donations. He plans to give it most of the rest of his wealth in his lifetime or upon his death, said people familiar with the matter, pushing its assets above $20 billion.

Soros Fund Management’s annual returns have averaged around 11% in the past 10 years, according to a person familiar with the figures, well below the 30% of its early decades. 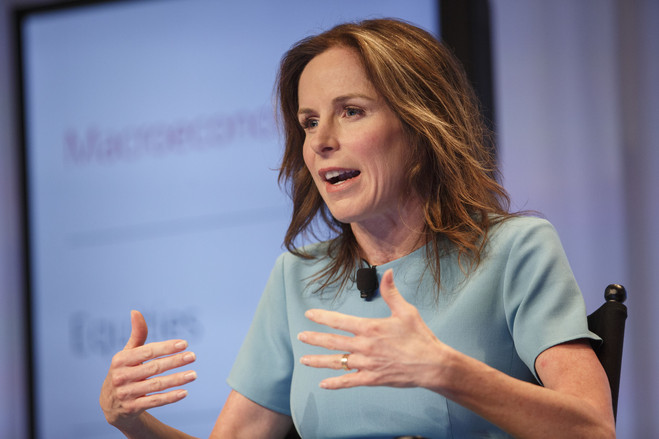 Ms. Fitzpatrick, who began as investment chief in April, is an options trader by background who arrived from UBS Asset Management, where she oversaw teams managing more than $500 billion in client money across a wide range of strategies.

Her priority isn’t making her own trades but moving money as opportunities shift, said people familiar with the Soros firm. They added she is whittling the number of managers given money to invest and is seeking to build a more collaborative approach, such as by linking employee pay more closely to returns of the firm as a whole.

The firm has about $6 billion in private-equity and related investing, from African cellphone towers to a stake in a restaurant chain called Dinosaur Bar-B-Que. The overseers of this chunk of money report to Open Society’s investment committee.

Ms. Fitzpatrick, 47 years old, recalled how one Sunday morning shortly before she started, an unfamiliar number lit up her phone as she was walking out of church with her young daughter. It was Mr. Soros, wanting to share an observation on the markets. “I recognize his number now and pick up on the first ring,” she said.

The two speak regularly, with Mr. Soros sharing his view of the markets but so far refraining from interfering in her decisions.

Mr. Soros now spends about half the year on the road in connection with Open Society’s work and rarely visits his office at his firm’s Manhattan headquarters. He still gets a daily copy of its profit-and-loss statement.