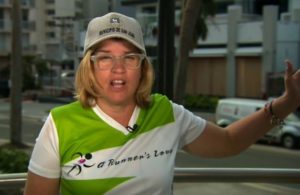 The mayor of San Juan, Puerto Rico has been accused of withholding food and supplies from residents of the island’s capital in order to milk maximum publicity and political capital from the disaster, according to a caller to a New York City Hispanic radio station who identifies herself as a Puerto Rico police officer from the San Juan suburb of Guaynabo. The officer reported that San Juan mayor Caren Yuliz Cruz is guilty of “staggering negligence and dereliction of duty in the wake of Hurricane Maria,” GotNews.com reports.

The police officer begins by pleading with the U.S. Military to go directly to the people of Puerto Rico with its aid, as current efforts to work through Governor Ricardo Rossello and Mayor Cruz are proving futile. “What us Puerto Ricans need is the U.S. Armed Forces to come in and distribute the aid. And that they stop the Governor, Rossello, and the Mayor, Yulin, from continuing on doing what they’re doing. It’s an abuse; it looks like communism, in our own island.”

“There are dozens and thousands and thousands of food [boxes] and when people ask, we cannot give anything away because Carmen Yulin says that we cannot take anything out, because everything is a soap opera here – everything is a show,” the caller explains. “There have to be cameras here and there because, you know, they are just looking for votes for the upcoming years.”

“Carmen Yulin won’t move unless there is a camera behind her,” the caller continues. “I need to speak for the people because the people are suffering. Because I, as a cop – along with other police partners – we are seeing it.”

Mayor Cruz, who praised FEMA just five days ago before remembering she’s a Democrat – turned around on Friday and told CNN that FEMA and President Trump had offered no help in front of a giant stack of US aid pallets.

“We’re dying here, and I cannot fathom the thought that the greatest nation in the world cannot figure out logistics for a small island of 100 miles by 35 miles long. So I am asking the president of the Untied States to make sure somebody is in charge that is up to the task of saving lives.”

“If anybody out there is listening to us, we are dying. And you are killing us with the inefficiency and the bureaucracy.”

Fox’s Geraldo Rivera pretty much shut that down:

#SanJuanMayor says residents are "dying," & somehow @realDonaldTrump is to blame. I'm here. Who is dying? Why? Where? Let me help save them.

…They have the generators, water, food, medicine, and fuel on the ground, yet the supplies are not moving across the island as quickly as they’re needed.

“It’s a lack of drivers for the transport trucks, the 18 wheelers. Supplies we have. Trucks we have. There are ships full of supplies, backed up in the ports, waiting to have a vehicle to unload into. However, only 20% of the truck drivers show up to work. These are private citizens in Puerto Rico, paid by companies that are contracted by the government”.. (link)

The Mayor of San Juan, who was very complimentary only a few days ago, has now been told by the Democrats that you must be nasty to Trump.