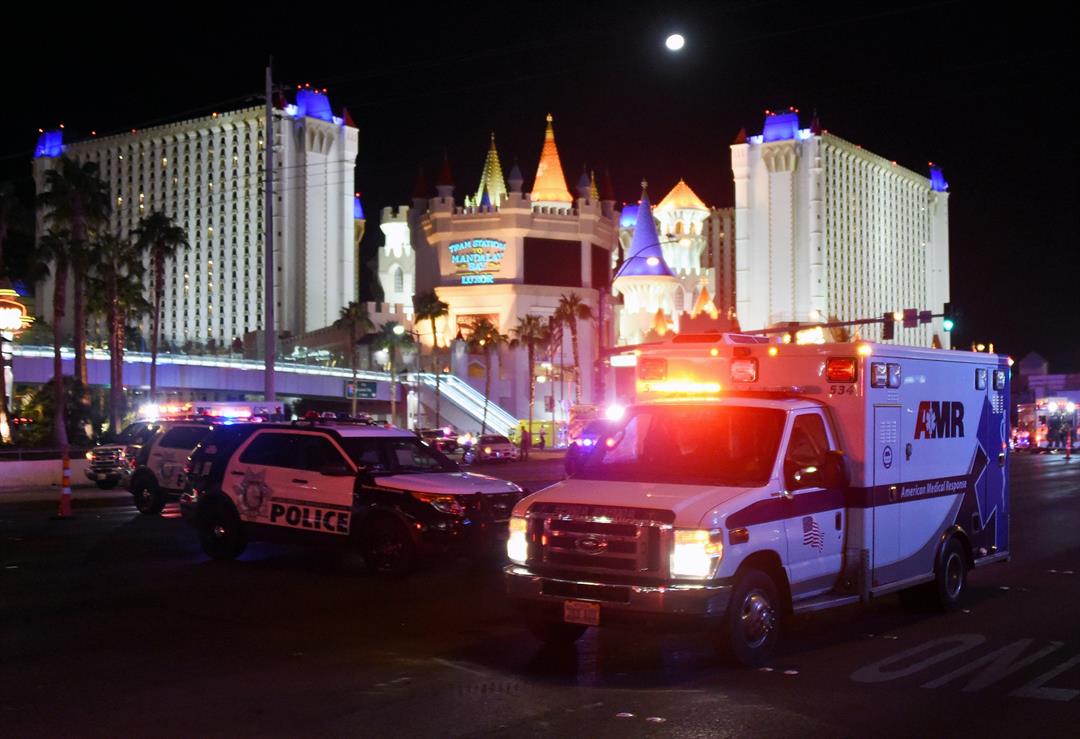 Who were the dead? And where did the wounded come from?

ON SUNDAY, OCT. 1 AFTER SHOOTING Ambulances lined up at Hooters in Las Vegas on Sunday. October 1

Something Is VERY Wrong With This Picture (And Video)

The preceding photo, which was taken in front of Hooters Hotel and Casino in Las Vegas on October 1, 2017, is quite clear and indisputable.

It shows many ambulances (as many as 17 at one time) that were lining up right after the mass shooting at the HARVEST Country Music Festival.

However, there’s one HUGE problem with this crime scene.  It could not have happened as described by the mainstream media and law enforcement.

It especially could not have occurred as explained by the LVMPD and the FBI.  Those numerous armchair investigators who say no one died at the HARVEST are also categorically debunked.

Hundreds of injured — many of them seriously and/or mortally wounded could not have made the long trek from the HARVEST music venue after being shot.  The distance is simply too far.

As irrefutable evidence, the following video presents footage of concert-goers leaving the east gate of the venue who are not limping or shot or bloody or injured in any way.  They’re all just scrambling to get away from the Mandalay Bay as quickly as possible.

Therefore, how did the Hooters crime scene fill up with so many bodies and wounded so fast?

Ambulances lined up at Hooters

The following video taken from the MGM Grand by 2 hotel guests on October 1st clearly shows the many ambulances lining up and leaving with the dead and wounded.  The problem with this picture is that they could NOT have been HARVEST concert-goers.  So who were they?

The following excerpt from a recent Alt Media article reveals that the official narrative not only makes no sense, it smacks of a “massive coverup” by the LVMPD and FBI.  Such a complex and audacious coverup can only be implemented with the approval of FBI senior leadership and its DOJ overseers.

Where is AG Jeff Sessions where it concerns the worst mass shooting in U.S. history?  AWOL!  He needs to decisively address the obvious and alarming discrepancies that are disclosed (and implicit) by the following testimony.

“It must have happened at Hooters dude because they are all showing up there,” he said. “It looks like most of them are at Hooters.”
(Source: VEGAS BOMBSHELL: VIDEO SHOWS 17 AMBULANCES PULLING BODIES OUT OF HOOTERS)

Screenshot taken from video shot from the MGM Grand of ambulances lining up at Hooters Hotel & Casino.

Massive Coverup by LVMPB and FBI

The evidence of a second mass shooting on that Sunday evening is now undeniable.  The Google map posted below indicates that the distance from the HARVEST to the Hooters Casino would have been, at the very least, a mile.  Given the grave condition of many of the wounded, as told by an eyewitness casino dealer at Hooters (see transcript below), it’s self-evident that those wounded pouring into the hotel were not arriving from the HARVEST. What in the world is really happened in Vegas?

The entire official story coming from the joint LVMPD-FBI task force has fallen apart since day one.  Actually, it began to unravel within minutes of the massacre.  And the naked deception by law enforcement continues to be exposed by the day.

Which begs the question: What really happened?  Who, really, were the victims at Hooters of this premeditated mass murder?  Who ordered the massacre and why?  And why did they specifically choose the HARVEST event?

As if things could not get any stranger with the worst mass shooting in American history, there is now the distinct possibility that LRAD was also utilized.  If this particular piece of the psyop can be proven, then there is no question that the FEDs organized this false flag operation for multiple reasons, the most sinister of which can only be conjectured.

LRAD: Were the helicopters and drones in Vegas a part of a ‘Long Range Acoustic Device’ live test