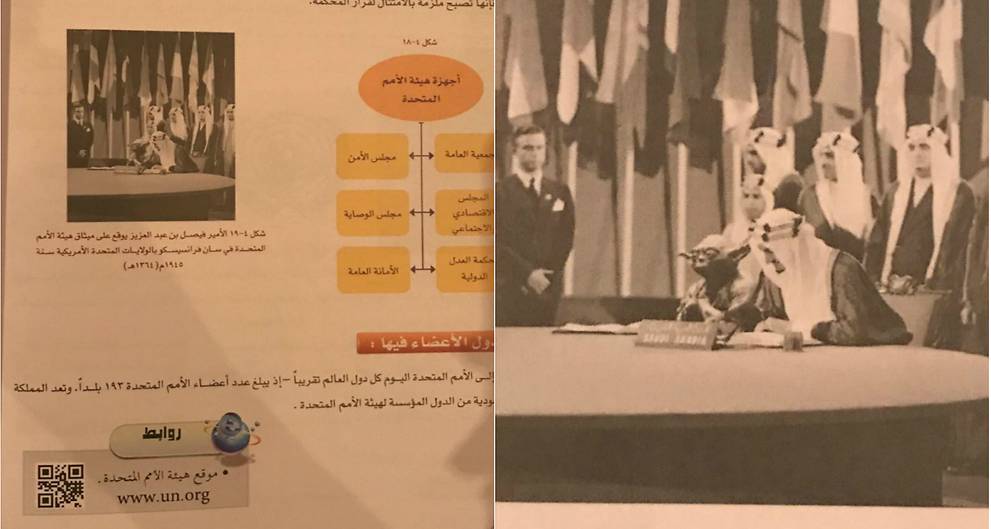 (ANTIMEDIA) Saudi Arabia — Saudi Arabia’s Minister of Education has been given the boot for allowing the image of a pop culture icon to be published in his country’s high school curriculum. From the Associated Press on Monday:

“A senior Education Ministry official in Saudi Arabia has been fired after high school students opened their textbooks to find an image of Yoda from the ‘Star Wars’ films seated next to a Saudi king.

“The image produced by Saudi artist Abdullah Al Shehri, known as Shaweesh, shows the late King Faisal, who was foreign minister at the time, signing the United Nations Charter in 1945 with the diminutive green Jedi master seated to his right.”

Shaweesh, who spoke to the New York Times after posts about the gaffe began popping up on social media last week, says he meant no disrespect to King Faisal and that, in fact, he selected the legendary Jedi to join the late king in the piece because of the positive attributes of both figures.

“He was wise and was always strong in his speeches,” Shaweesh said of Faisal. “So I found that Yoda was the closest character to the king.”

The piece, the artist says, is part of a series he completed back in 2013 that features American pop culture icons, including Darth Vader and Captain America, superimposed onto historical images.

As to how or why his work was printed in Saudi textbooks, Shaweesh says he’s as baffled as everyone else.

“I am the one who designed it,” he told the Times, “but I am not the one who put it in the book.”

When the BBC followed up on the story, Shaweesh added, “Someone should have checked the image before printing.”

It seems the Saudi Arabian government agrees, as a subsequent apology from the minister on Twitter and an assurance to correct the problem weren’t enough to save his job.