Russia Responds: “The US Has Declared The Hot Phase Of Diplomatic War” 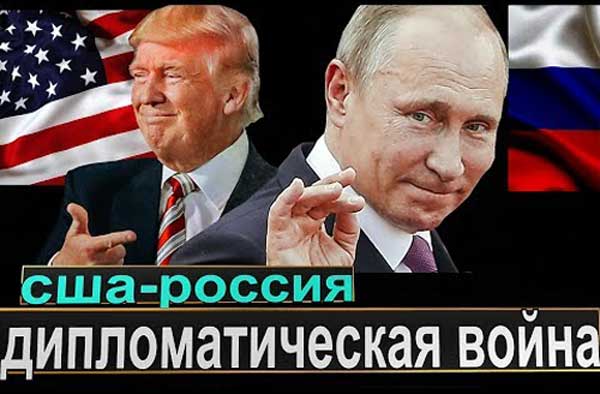 Russia Responds: “The US Has Declared The Hot Phase Of Diplomatic War”

Just minutes after Russia was given 2 days to implement today’s decision by the State Department, shuttering Russia’s consulate in San Francisco, California and two diplomatic annexes in Washington, DC and New York City, in “the spirit of parity invoked by the Russians”, the Russian responses started coming in, and they were not happy.

Russia’s foreign minister Sergey Lavrov was first on the tape, saying he  “expressed regret about the escalation of tensions in bilateral ties”, noting “it wasn’t Russia that started the escalation.”

Lavrov told Tillerson that Moscow would “closely study” the new US measures and would inform Washington of its reaction in due course. Ironically, earlier in the day the US said that it “is prepared to take further action as necessary and as warranted,”even as the State Department prompt tweeted that the “US hopes to avoid further retaliation & move forward with improved relations & cooperation with #Russia”

To be sure, former US ambassador to Moscow and vocal Putin critic, Michael McFaul, was skeptical:

And judging by the immediate outpouring Russian reactions, he has every right to be. According to AP, the newly arrived Russian ambassador to the US invoked Vladimir Lenin in saying Moscow will carefully consider its response to the latest US diplomatic escalation: Anatoly Antonov flew into Washington on Thursday, hours after the State Department’s announcement of the closure.

Russian news agencies quoted him as saying: “We have to act calmly and professionally. Speaking like Lenin, we don’t need hysterical impulses,” citing a Lenin maxim.

But the heavy artillery was as usual relegated to domestic Russian politicians:  Leonid Slutsky, head of the Russian Duma’s foreign affairs committee, accused the U.S. of a sharp escalation in diplomatic tensions.

Slutsky, one of the top Russian diplomats, was quoted by Russian news agencies as saying, “It’s a highly unjust step. It means that the U.S. is declaring the hot phase of diplomatic war.”

Cited by AP, he also said that closing institutions abroad is more serious than the U.S. decision last year to expel 35 Russian diplomats and close two estates used by the Russian Foreign Ministry.

Other takes on the latest diplomatic spat were just as skeptical. Former US diplomat Jim Jatras said that while President Trump says he wants better relations with Russia, he recently qualified that with “some day” and “eventually.”

“For a lot of people in Washington, having bad relations with Russia is an end in itself, it’s not a means to an end. And they are calling the shots, not President Trump,” Jatras said. “If there is anybody in his administration who wants to improve ties with Russia, it is him – but as far as I can tell, he’s about the only one.”

“This is all part of an escalation of tensions between the US and Russia which, I am sad to say, the US initiated,” Dan Kovalik, who teaches international human rights at the University of Pittsburgh School of Law, told RT. “Just when there appeared to be a welcome breakthrough between the US and Russia at the G-20 Summit, the US Congress reacted to the possibility of a détente by immediately and overwhelmingly acting to impose a new round of sanctions against Russia aimed at Russia’s natural gas trade in Europe,” Kovalik said.

The sanctions were adopted with veto-proof majorities, so President Donald Trump had to sign them into law at the beginning of August.

“It appears that there is strong, bipartisan opposition in the US to a peaceful relationship with Russia, and this opposition is putting the entire world at risk of more war and conflagration,” Kovalik said. “It is high time the US pull back from such provocations of Russia and find a way to work with Russia as a friend and partner, just as Russia has wanted for many years.”

“This tit-for-tat will mean eventual catastrophe for everyone on earth, unless we finally get some sanity in US leadership, to pull back from the brink,” said Mark Crispin Miller, professor of media studies at New York University. “Judging from the warlike posture of both parties and the US media, it’s hard to see where such restraint will come from; and yet those of us who see the danger must do all we can to warn against it.”

Finally, retired FBI agent Coleen Rowley told RT that US foreign policy sometimes looks as if five-year-olds were in charge of it. “This childish tit-for-tat game will not end well unless there’s a grown-up in the room who can put an end to it.”

So far the only grown ups in the room are intent on further escalating said “game.”