Hurricane Jose is far from over and gaining steam 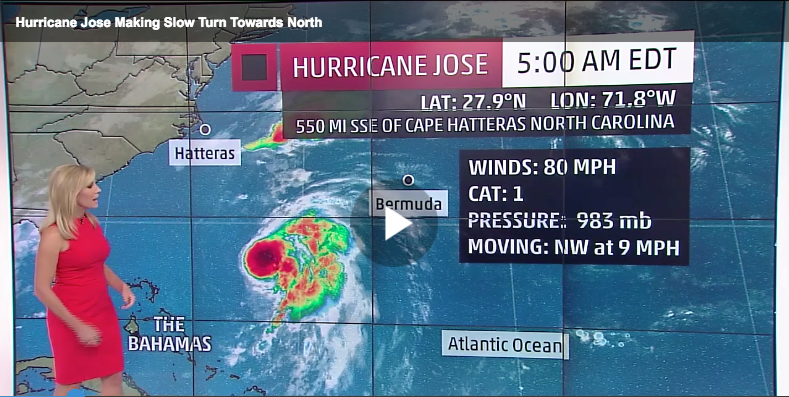 Hurricane Jose is far from over and gaining steam

By Jonathan Belles
The Weather Channel

High surf and rip currents will affect the U.S. East Coast, the Bahamas, Bermuda and the north coasts of Puerto Rico and Hispañola into next week.

Direct impacts from Jose are possible along the U.S. East Coast next week.

Jose, now a Category 1 hurricane in the western Atlantic, will produce dangerous high surf and rip currents as it nears the Eastern Seaboard next week. Winds as high as tropical storm force are possible from North Carolina northward.

Jose is currently located around 550 miles south-southeast of the Cape Hatteras, North Carolina and is moving northwest at 5 to 10 mph.

An Air Force Hurricane Hunters plane found winds of 75 mph on Friday afternoon, which puts Jose at the threshold for Category 1 status. Jose has strengthened and continues to organize as of early Saturday.

Another Air Force Hurricane Hunters plane will investigate Jose later Saturday to get a better estimate of its winds.

Jose will generally track northwestward through early Saturday, before turning northward by Saturday night. This will bring Jose closer to warmer waters, which should allow for continued gradual intensification.

Wind shear is expected to increase by late this weekend, which should keep a slight lid on Jose’s intensity. However, there is concern that Jose’s wind field size could expand as it gains latitude.

At this time, the majority of forecast guidance still shows Jose curling north, then northeast sufficiently to the east of both the Bahamas and the U.S. East Coast to avoid direct inland impacts.

Some forecast guidance shows Jose passing close enough to the East Coast to at least bring a brush of rain and some gusty winds the first half of next week.

Tropical storm watches are possible along the mid-Atlantic coast as soon as Saturday, with tropical storm conditions possible as early as Monday. Farther north along the U.S. East coast, the chance of some direct impacts from Jose is increasing, but it is too soon to determine their exact magnitude and location.

All interests along the U.S. East Coast from the Carolinas northward, as well as Atlantic Canada, should continue to monitor Jose well into next week for any forecast changes.

Regardless, large swells generated by Jose will continue to affect the Bahamas, Bermuda and the north coasts of Puerto Rico the next several days.

By this weekend, these large swells should reach the Eastern Seaboard, spreading as far north as coastal New England. Waves higher than 10 feet may reach the coastline north of the Georgia/South Carolina late this weekend.

If you have plans at the beach into next week, be on the lookout for dangerous rip currents. Observe all orders to stay out of the water if rough surf and rip currents are in play. Life-threatening rip currents will be possible this weekend into early next week.

Check back with weather.com for updates in the days ahead for the latest details on Jose.