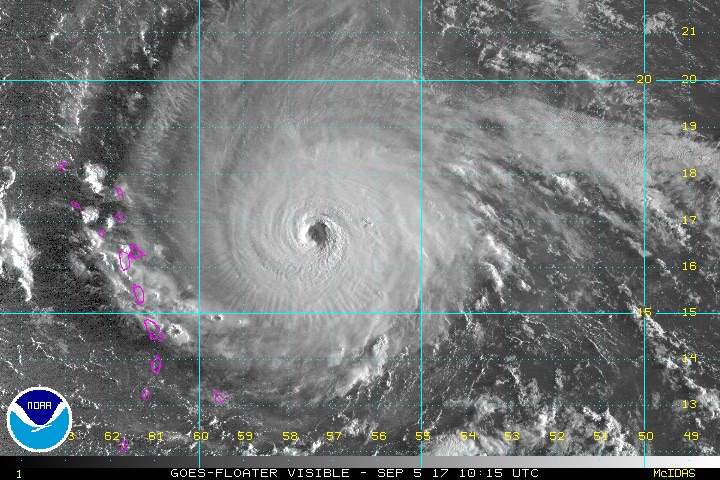 Hurricane Irma had the textbook look of a powerful hurricane on Tuesday morning as it neared the Leeward Islands. (NWS)

Irma’s maximum sustained winds had increased to near 175 mph, and the storm was located about 270 miles east of Antigua, moving west at 14 mph, the National Hurricane Center said in its 8 a.m. ET advisory.

“Some fluctuations in intensity are likely during the next day or two, but Irma is forecast to remain a powerful category 4 or 5 hurricane during the next couple of days,” the NHC said.

Irma’s center was expected to move near or over the northern Leeward Islands late Tuesday and early Wednesday before affecting Puerto Rico by Wednesday, the hurricane center said.

Hurricane warnings were issued for 12 island groups in the Caribbean, including the British Virgin Islands, where the governor urged those who could to evacuate the tiny island of Anegada ahead of the storm.

Authorities warned the storm could dump up to 10 inches of rain, cause landslides and dangerous flash floods and generate waves of up to 23 feet.

“This is not an opportunity to go outside and try to have fun with a hurricane,” U.S. Virgin Islands Gov. Kenneth Mapp warned. “It’s not time to get on a surfboard.”

While Irma’s potential impact on the U.S. mainland is not yet fully known, Florida Gov. Rick Scott declared a state of emergency Monday to ensure “local governments have ample time, resources and flexibility to get prepared for this dangerous storm.”

“In Florida, we always prepare for the worst and hope for the best and while the exact path of Irma is not absolutely known at this time, we cannot afford to not be prepared,” Scott said in a statement.

Some residents across South Florida spent Labor Day stocking up on supplies in case Irma nears, instead of buying items for barbecues.

“Obviously, get ready ahead of time. We have food, as you can see,” shopper Jacqueline Kimbrough told WSVN of her preparations. “We have our music. We just have a good time. We don’t worry about it and we pray.”

Some supermarkets reported being out of water as of late Monday, WSVN reported.

At a Home Depot in Hollywood, Fla., shoppers stocked up on hardware and supplies such as batteries and flashlights.

“Better to be safe than sorry,” shopper Jeff Davis told WSVN. “It could potentially be a Category 4 or 5, and I can’t prepare Thursday or Friday, so now’s the day to do it.”

Further north on Florida’s Gulf Coast, residents weren’t taking any chances, and spent Monday making sure their disaster kits are ready for whatever the storm brings.

“Definitely better now than when it’s too late,” Chance Burnett told FOX 13 Tampa as he loaded cases of water bottles into his trunk.

“We’ve got a lot of cases of water and a lot of canned foods, tuna, Chef Boyardees,” said Burnett. “And then, we are on our way to Home Depot and we are going to stock up on flashlights and batteries.”

At Home Depot in Tampa, tarps, gas containers and generators were among the most popular items being bought by shoppers. The generator shelves were restocked on Monday morning, but were already sold out by the afternoon

Assistant store manager Chrissy Lenze told FOX 13 the store expects a new shipment this week, and they have plenty of other supplies.

“Mostly plywood, water, flashlights, tarps for afterwards, sandbags to prepare,” Lenze said. “We want to be the last ones to close, first ones to open during a storm.”

On Puerto Rico, which will feel Irma’s effects by Wednesday, residents braced for electricity outages after the director of the island’s power company said that storm damage could leave some areas without electricity for four to six months.

Ricardo Ramos told radio station Notiuno 630 AM “some areas will have power [back] in less than a week.” The utility’s infrastructure has deteriorated greatly during a decade-long recession, and Puerto Ricans experienced an island-wide outage last year.

Both Puerto Rico and the U.S. Virgin Islands expected 4 inches to 8 inches of rain and winds of 40-50 mph with gusts of up to 60 mph.