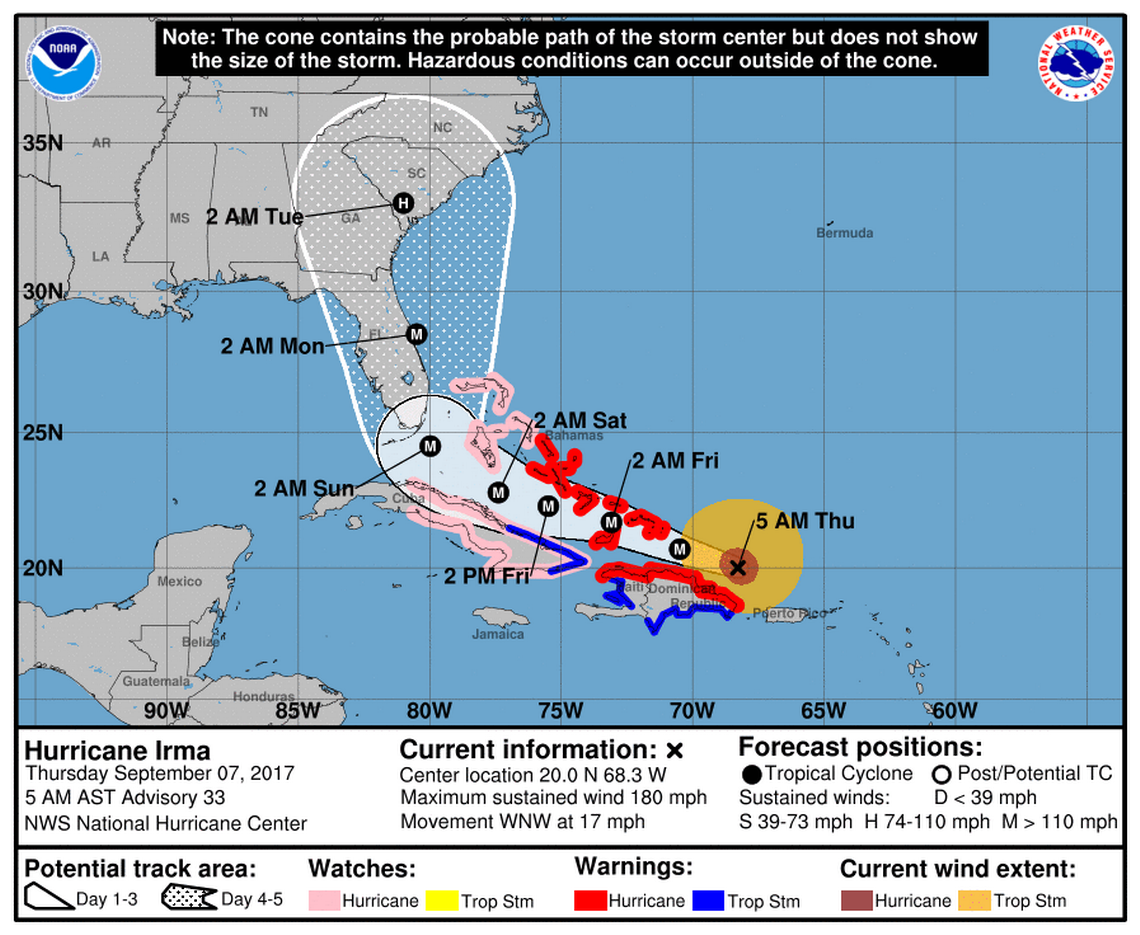 Hurricane Irma is now a killer storm, leaving at least eight people dead in the Caribbean as the storm continues on a destructive path on the way to Florida.

Irma has so far battered Barbuda, St. Martin and the British Virgin Islands, according to reports.

Exactly where in Florida Irma would hit was still not known, according to the National Hurricane Center’s advisory at 5 a.m. Thursday.

Hurricane warnings have been issued for parts of the Bahamas, the Dominican Republic and Haiti.

Hurricane Irma has killed at least eight people and injured 23 in French Caribbean island territories, according to The Associated Press.

French Interior Minister Gerard Collomb said the death toll in Saint-Martin and Saint-Barthelemy could be higher because rescue teams have yet to finish their inspection of the islands.

“The reconnaissance will really start at daybreak,” Collomb said.

Irma blacked out much of Puerto Rico, raking the U.S. territory with heavy wind and rain while staying just out to sea, and it headed early Thursday toward the Dominican Republic and Haiti, The Associated Press reported.

The hurricane center said the threat of direct hurricane impacts in Florida over the weekend and early next week had increased — and that hurricane watches would likely be issued for portions of the Florida Keys and the Florida peninsula on Thursday.

Hurricane warnings for the U.S. and British Virgin Islands were canceled Wednesday night with the latest advisory.

National Hurricane Center forecasters said they were confident Irma would continue on its west-northwest track over the next two to three days. As it nears South Florida and the Keys, it’s expected to make a sharp turn to the north by the weekend, steered by a low-pressure trough moving across the United States. But where, and how fast, that turn occurs remains unclear, leaving South Florida to scramble in the face of an uncertain threat.

Track models have generally made the turn sooner, sending the storm up South Florida’s east coast or across the northern Bahamas. But some reliable models also still track the storm slightly west, and forecasters warned that the margin of error remains at 175 miles or more after four days.

“That’s why we say look at the cone. The center could be anywhere in that cone,” hurricane center spokesman Dennis Feltgen said. “South Florida and Central Florida will be impacted. We’re confident with that right now. What we’re not confident with is exactly where that center is going to go. But remember a hurricane is not a dot on the map. They’re large storms that cover a large area.”

Nearly 3,000 people in Puerto Rico fled to shelters, with widespread power outages reported in advance of the storm. The island’s electric company, which has struggled with maintenance amid a deepening financial crisis, has said power could be out in some areas for four to six months.

Irma was expected to pass near or just north of Hispaniola Thursday morning, then be near the Turks and Caicos and southeastern Bahamas later in the day.

Hurricane warnings remain in effect for Puerto Rico and parts of the Dominican Republic and Haiti and the Bahamas. Hurricane watches have been issued for parts of Cuba, from the Matanzas province to Guantánamo and the northwestern Bahamas. Tropical storm warnings also covered large parts of Hispaniola and Cuba.

Across the western Caribbean, up to 37 million people could be affected by Irma, United Nations Secretary General spokesman Stephane Dujarric said Wednesday.

Forecasters say Irma is the strongest storm ever recorded in the Atlantic, outside the Gulf of Mexico or Caribbean. It has also set a new all-time high for the amount of wind energy ever recorded over a 24-hour period, said Colorado State meteorologist Phil Klotzbach. A hurricane hunter plane Wednesday recorded winds over 188 mph.

Irma blazed across the Virgin Islands, where sustained winds were reported at 106 mph. St. Martin and Anguilla took direct hits, with a NOAA weather station on Barbuda reporting a 155 mph gust and sustained winds of 118 mph before failing Wednesday morning, forecasters said. Early reports from the islands, including St. Martin, Barbuda and Barthelemy, described widespread flooding, with roofs ripped off and trees downed. St. Martin’s government headquarters was destroyed, The Associated Press reported.

If Irma hits South Florida, it could deliver the first widespread damage to the region since Hurricane Wilma in 2005. Hermine ended the state’s 10-year streak without a hurricane last year, but it landed far to the north in the state’s Big Bend. Matthew came closer, raking the coast as it rolled north, but most damage occurred north of Daytona Beach.

Wednesday morning’s track shift to the right could be bad news for South Florida’s densely developed east coast — or good news depending on how far it moves. But with hurricane force winds extending 50 miles from the storm’s center, it’s a path too close to call for most.

Since last week, meteorologists over the Great Plains and Midwest have increased the number of weather balloons they send into the atmosphere to sample conditions hoping for a better read on the trough, said National Oceanic and Atmospheric Administration meteorologist Kevin Scharfenberg.

“So far it’s behaving as expected, that’s why you’re not seeing the models change a lot,” he said.

Wavering, called the wiper effect, is nothing unusual for models that often struggle to forecast turns. But it creates uncertainty, and anxiety, with the public that frustrates forecasters, particularly with so many different and often outdated and unreliable models splashed across the Internet.

“I just absolutely refuse to show what some people call the spaghetti model and throw everything in doubt,” said former hurricane center director Max Mayfield, who’s now a hurricane specialist for WPLG Local 10.

The hurricane center generally relies on models that they verify for accuracy yearly. These include the European and U.S. models, as well as an ensemble run of other models. Over the years, the official forecast tracks from the center have repeatedly fared better than single any model. Mayfield often shows the models used by the hurricane center, but only to give viewers an idea of what they’re considering.

Forecasters also look for patterns in model runs to avoid basing projections on a single run.

“I don’t like to get all excited about one run to the next run. I like to look at a lot of models over a lot of runs and look for trends and consistency,” said University of Miami hurricane researcher Brian McNoldy. “If you have a model that hops around from one run to the next to the next, it’s kind of like an eye-rolling moment. It shows it doesn’t really have a grasp on what’s happening.”

Florida could begin feeling tropical storm force winds late Friday or early Saturday, with hurricane conditions moving across the state over the weekend. Until it makes landfall, it’s expected to remain a dangerous Cat 4 or 5.

“The bottom line is nobody on the planet can tell you if the corner of the hurricane is going to be over us or just off the coast. It’s just too far out,” Mayfield said. “Even if they have a perfect forecast, and if it falls in the middle of the cone, we’re close enough to have impacts.”