First HARVEY, Then IRMA — What’s really going on with these superstorms? 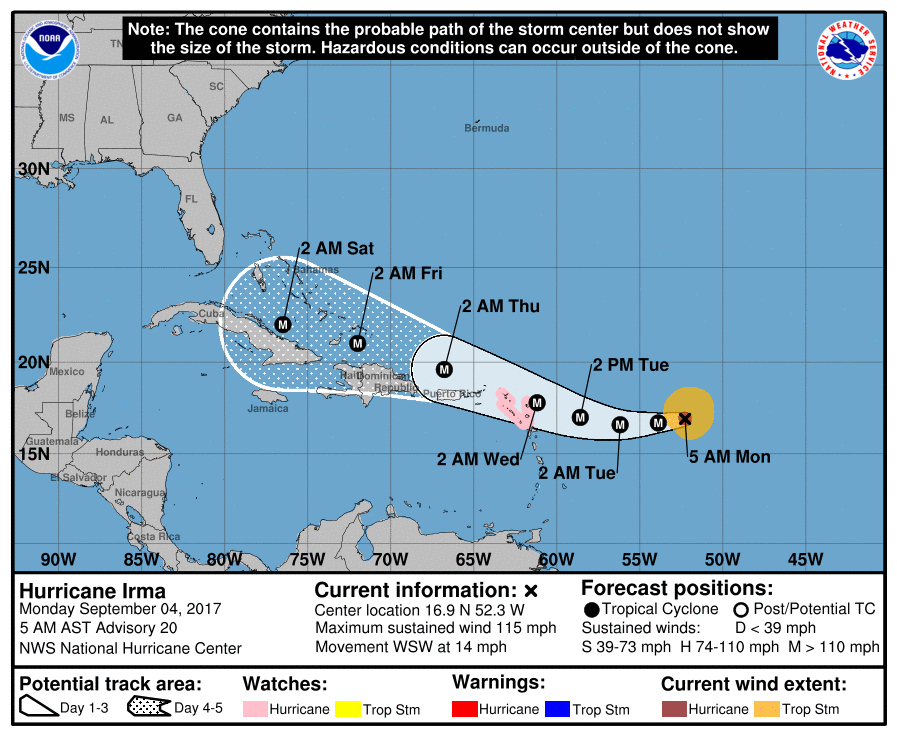 HARVEY & IRMA: Will a one-two punch hit America in the aftermath of the solar eclipse?

Those of US who understand the highly inauspicious aspects associated with a total solar eclipse, especially when it crosses directly overhead as one did over the USA on Monday, August 21st, are not at all surprised by the calamitous superstorm HARVEY.

Nor are we surprised that another hurricane — IRMA — quickly organized in the Atlantic and is already a Category 3 on the way to becoming a Cat 4.

Special Note:
Given the state of the art of weather modification, climate engineering and weather weaponization, it’s now quite simple for the geoengineers to hijack a small fledgling storm brewing in the Atlantic Ocean or Gulf of Mexico and methodically intensify it into a massive powerful superstorm.  This is exactly what the geoengineers did during the hurricane season of 2005 with Hurricanes Katrina, Rita and Wilma.  That’s not to say that all hurricanes are geoengineered; however, those that possess the telltale signatures of artificial manipulation are very easy to spot.  This link contains incriminating satellite imagery that conclusively demonstrates the fabrication of a 2015 superstorm in Texas:
TEXAS FLOODS: A Geoengineered Weather Event Using Chemtrails And HAARP

President Donald Trump has made many moves which have irked the NWO globalist cabal. (NWO = New World Order)

Of all the presidential decisions that Trump has made this year, pulling the United States out of the Paris Agreement is by far the most consequential.  It’s also the one that has triggered the countless agents of Deep State.  From the East Coast intelligentsia to lawyer-lobbyists inside the Beltway, from the Sultans of Silicon Valley to the Hollywood moguls, wealthy elites everywhere are up in arms.  The UN and EU bureaucrats who concocted the agreement under the United Nations Framework Convention on Climate Change are especially riled up.

The fraudulently obtained Paris Agreement had been fastidiously pieced together after decades of political corruption and governmental coercion at the highest levels.  Because this international accord uses the “Global Climate Change due to Human-generated CO2″ argument as the basis for its existence, the degree of scientific fraud necessary to support this bogus claim is unparalleled.

The preceding link clearly spells out the direct causation between the pervasive utilization of both chemical geoengineering and HAARP technology, and Global Climate Change. Not only is GCC mostly manmade, it’s being systematically manufactured as an integral piece of the control mechanism (i.e. One World Government) to be imposed on the entire planetary civilization.  One World Government Initially Emerging As Global CO2 ‘Management’ Regime

This is where the nationalist POTUS really got himself in trouble.  By formally submitting the U.S. intent to withdraw from the Paris Climate Accord, Trump has essentially blown up the whole NWO agenda, and particularly the One World Government project.  Of course, the patriot movement absolutely loved this executive decision as it truly protected the nation and its citizenry.

It is the establishment of a One World Government (OWG) that is the centerpiece of the globalist enterprise to create a global totalitarian superstate that is all-powerful and all-controlling.  And it was the bogus GCC scheme that was conceived so the ruling cabal could foist this new autocratic regime on the world community of nations.  The tyrannical European Union provides a very good model of where the OWG initiative is going.

Only in this way can the globalists effectively own, and operate on, every square inch of planet Earth.  By unlawfully arrogating extraordinary powers to their future One World Government, the controllers hope to exercise complete authority over the weather and natural resources of the whole world.  As follows:

While this power-grabbing maneuver will permit the NWO cabal to dictate to every nation, it cannot be completed without the full support of the U.S. government. Because the USA is the de facto global policeman, this plot for total world domination cannot proceed without the total cooperation from the Trump administration.  That’s because: The USA is the Military Arm of the New World Order

Now that Trump is the skunk at the GCC picnic, the ruling cabal will do everything in their power to either remove him from office, or, rain on his parade like never before.

TPTB just did that with HARVEY.  It appears they will do it again with Irma.  For all anyone knows, the geoengineers may have an assembly line of superstorms on their order sheet from the shadow government.  In view of the extreme measures the cabal has taken thus far, it’s quite likely there will be multiple storms targeting the mainland throughout this hurricane season.

There’s nothing more compelling than the “shock and awe” of a string of superstorms hitting major cities or key states.  An unaware populace will gladly cede powers, surrender rights and obey new draconian laws in the wake of such a catastrophic deluge like HARVEY.

This is where the globalist really excels at manufacturing consent.  They know that 2 or 3 cataclysmic superstorms will sufficiently frighten and soften up enough Americans that they can be stampeded like sheep into a pen of compliance.

KEY POINT: Many of these folks are already totally brainwashed Obamabots, Clintonistas and/or Berniacs. Others are ultra-liberals and leftwing extremists who literally go to CNN for their news. Still others are fake progressives or radical Democrats, dyed-in-the-wool socialists or communist Bolsheviks who go with whatever program they have subscribed to.  Then there are the AntiFa terrorists, Black Lives Matter rioters and LGBT mercenaries who strictly follow orders from their George Soros paid handlers.  Soros & Company sponsor all the main global warming advocacy groups.

Because there are now so many American sheeple being herded through fear-based social engineering, getting them to demand that the POTUS re-engage the Paris Agreement is a natural byproduct of a one-two punch like HARVEY and IRMA.  Even if IRMA does not make landfall in the USA, there will most likely be other major storms coming this season.

Once HARVEY completed its mission of totally terrorizing the Texas coast and surrounding environs, it has conditioned the rest of the country to be fearful of monster storms.  Event those who do not live near the coastlines have to be wary of the frankenstorms now being fabricated by the geoengineers. HARVEY WAS HOUSTON’S KATRINA & 9/11

In fact, many states throughout the country have experienced devastating mega-thunderstorms and tornadoes (and tornado swarms).  With each successive frankenstorm, the victims, as well as their families and friends, develop their own type of PTSD.  Why wouldn’t they?  Entire communities have been destroyed in the blink of an eye by some of these manufactured storm systems.

The critical point here is that the American people as a whole have become regularly terrorized by this weather warfare.  If they themselves have not been victimized, many live the horrific experience vicariously through family and friends.  In this way, the body politic can be easily maneuvered into making very bad collective demands of their government.

With this crucial background, it ought to be clear how and why the geoengineers slammed HARVEY into the Texas coast.  It will be interesting to see what they ultimately do with IRMA.  Even if it fizzles out, the mere threat is serving its purpose for the cabal.  Collective PTSD can be a very powerful phenomenon indeed.

The BP Gulf oil spill taught the GOM communities a lot about manmade weapons of mass destruction that are never suspected as being responsible for so many manufactured disasters.  There are still many folks on the Gulf who have yet to recover from that definitive act of environmental terrorism.  It will likewise take the people of East Texas some serious time to recover and process what just happened to them.

By assaulting the U.S. mainland with these highly destructive and deadly frankenstorms, the power elite send a message to the POTUS that is loud and clear.  The U.S. will re-enter the Paris Agreement, or else!

That farcical and coerced international agreement is the very basis of a One World Government that will not be denied the NWO cabal, unless Trump somehow eliminates the prospect for good.

Another message is this: President Trump doesn’t have control over American skies, and he is the Commander-in-Chief of the U.S. Armed Forces.  That such a predicament exists is not surprising; that more and more people are becoming aware of this state of affairs is a step in the right direction.  Citizens want to know why their president does not have control of the nation’s borders, or the skies, or the water supplies as seen all over California.  Hopefully, this perplexing situation will convince Trump of the dire need to forcefully reclaim the sovereignty of the American Republic.

Until then, the nation may have to weather a few more superstorms.  With each successive deluge or drought, the American people will eventually wake up to the fact that the once-natural weather patterns and climate trends are all fake…just like so much fake news being generated by the mainstream media (MSM).

The parallels couldn’t be more timely and climactic.  Taking back our weather is every bit as important as taking back our daily news form the MSM via the Alt Media.  Sooner or later, both of these plights must be successfully remedied if the USA is to be force for good in the world.

SOTN has researched and written extensively about the various reasons for the geoengineering of Hurricane Harvey.  None of these explanations are mutually exclusive, and many of them mutually reinforce each other.  Just like the false flag terror attacks on 9/11, the HARVEY black operation has many objectives on different levels.  The accomplishment of all of them is vital to the success of NWO agenda.

This article above focused on the Global Climate Change angle because that perspective clearly represents one of the primary motivations for aiming HARVEY at Houston, Galveston and Port Arthur Texas.  The Oil & Gas Industry has been a HUGE thorn in the side of those who have perpetrated the GCC hoax (via CO2) on the world-at-large.

Also, just like 9/11, there are those inside traders who knew in advance that energy stocks would get battered by the superstorm effects, so a lot of illegal profit-taking has occurred. Much more significantly, a struggling OPEC stood to gain considerably from this act of weather warfare.  The ensuing acts of environmental terrorism in the region have likewise served their purposes.

To read more about the several other goals the globalists plan to achieve with HARVEY, please consult the featured articles below:

Global Warming: The Secret Back Story

This is what TPTB did.  They saw that the planet had entered a period of global warming.  This occurred during World War II when they had to track the weather very closely for wartime purposes.  The steady warming of the planet paralleled the same period when the Oil & Gas Industry really began to take off and the global population explosion first began.  At the time when the data really started to pour in, the warming was just a small campfire … this was early on, right after World War II.  Soon after they first made those observations about the slow warming of the planet, the decision was made to turn the campfire into a wildfire.  They experimented with HAARP and used Chemtrails and other geoengineering technologies to ramp up the heat.  Eventually the wildfire of global warming was stoked sufficiently so that full-blown forest fires, brush fires and grass fires were jumping off anywhere and everywhere. In this way the synthetic component Global Warming was fabricated on top of a very real phase of planetary heating.  The next part of their plan is explained below.
(Source: New World Order: Where Geoengineering Via Chemtrails Meets The Global Carbon Control Matrix)