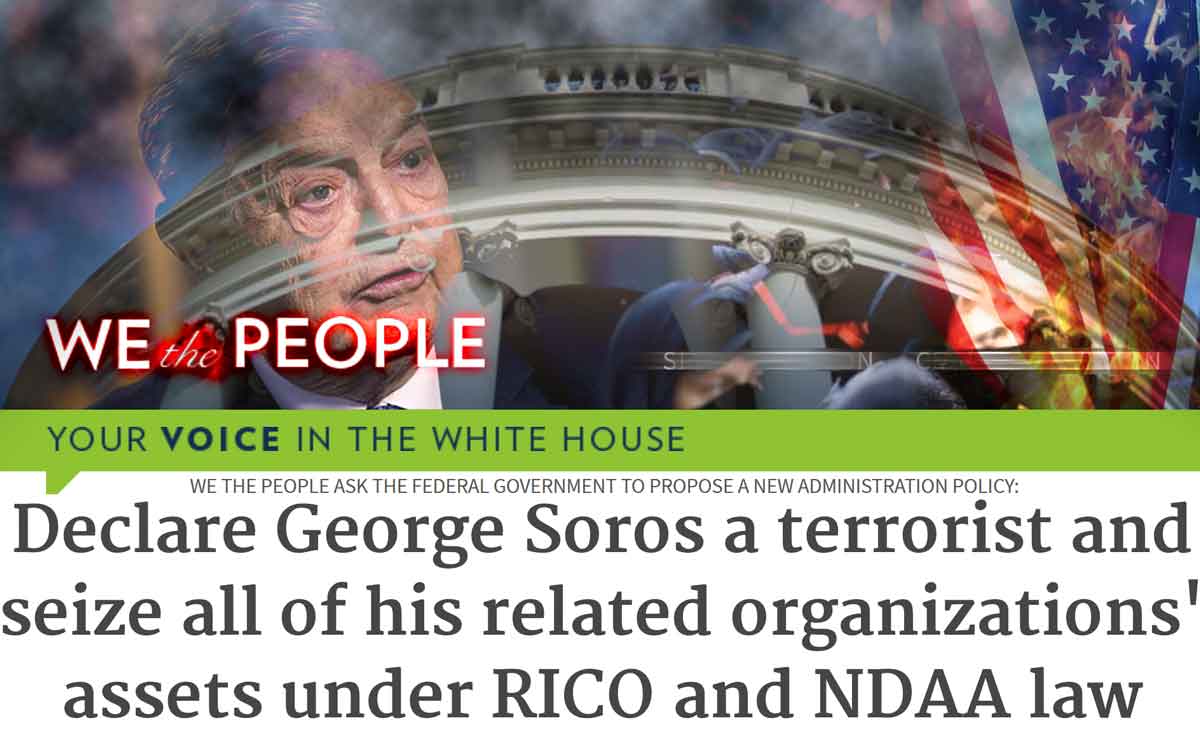 Petition To Label George Soros A “Domestic Terrorist” Has 80,000 Signatures

In less than two weeks, a WhiteHouse.gov petition demanding that billionaire investor George Soros be declared a “domestic terrorist,” and that authorities seize his multibillion-dollar fortune, has garnered nearly enough signatures to force the Trump administration to issue a formal response.

The petition, which has attracted 80,000 signatures so far – just 20,000 shy of the 100,000-signature threshold where a response would be required – accuses Soros of being guilty of sedition by financing groups that help support violent Antifa counter-protesters and other dangerous leftist groups.

Last week, we reported that a similar petition, this one asking that President Donald Trump declare Antifa to be a terrorist group, had reached the threshold. The petition is still awaiting a formal response, but in one promising development, Politico reported today that the Department of Homeland Security had described the group’s actions as “domestic terrorist violence” in private memos.

Over the past week, the mainstream media narrative has turned decidedly against Antifa, with the Washington Post, Bloomberg and the Atlantic publishing stories criticizing the group’s violent tactics.

Specifically, the Soros petition accuses the Hungarian-born billionaire of using the “Alinsky model” of terrorist tactics to destabilize the US social order. Saul Alinsky was a Chicago-based community organizer who wrote the infamous “Rules for Radicals,” a book meant to be a guide to aid leftists in the violent overthrow of the US government.

“Whereas George Soros has willfully and on an ongoing basis attempted to destabilize and otherwise commit acts of sedition against the United States and its citizens, has created and funded dozens (and probably hundreds) of discrete organizations whose sole purpose is to apply Alinsky model terrorist tactics to facilitate the collapse of the systems and Constitutional government of the United State, and has developed unhealthy and undue influence over the entire Democrat Party and a large portion of the US Federal government, the DOJ should immediately declare George Soros and all of his organizations and staff members to be domestic terrorists, and have all of his personal an organizational wealth and assets seized under Civil Asset Forfeiture law.”

Soros, as Russia Today explains, has funded organizations and projects that have been criticized for their radical tactics. His Open Society Foundation, along with USAID and the National Endowment for Democracy, have been accused of fomenting revolutions to install US-friendly governments from Serbia, in 2000, to Ukraine, in 2014.