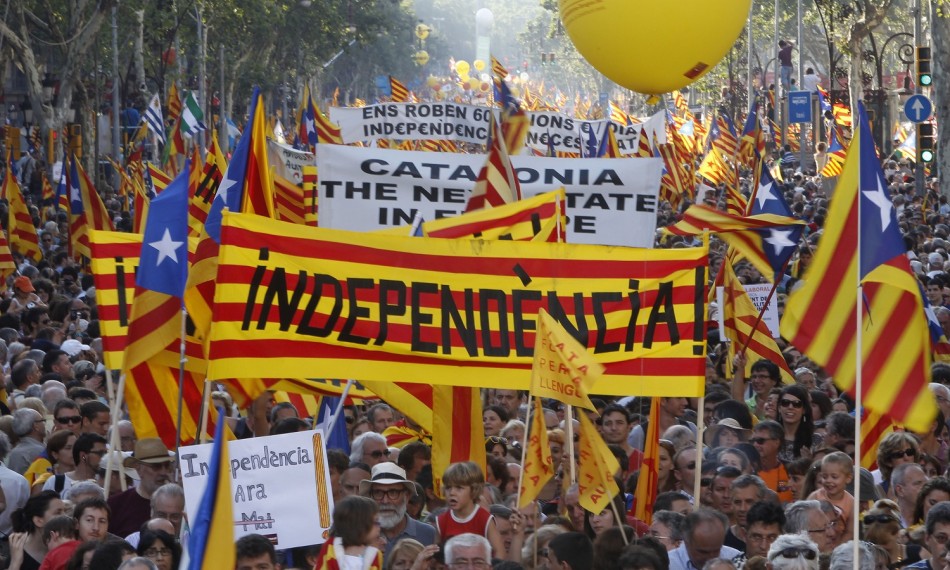 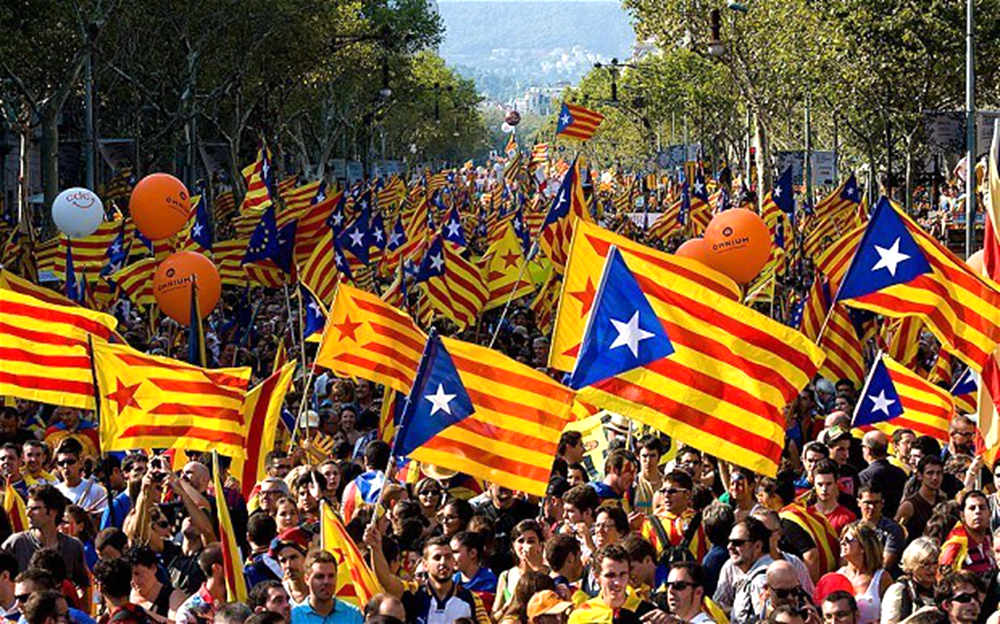 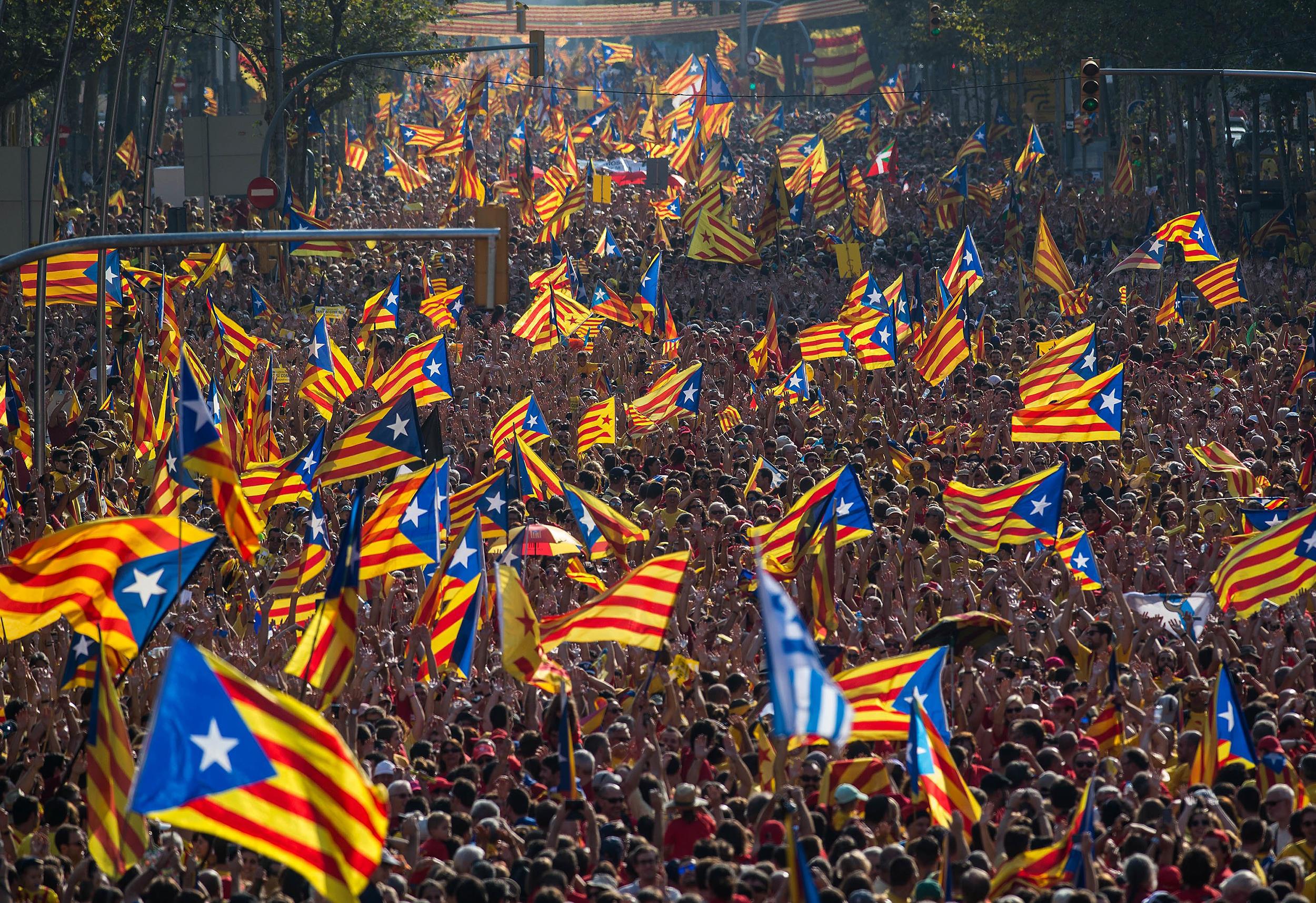 The Spanish ambassador to UK, Carlos Bastarreche, has warned Catalan government’s move will have ‘serious implications’ for European stability…

Europe is watching “a slow-motion, low-cost coup d’etat” by the Catalan government.

“If the Catalan government succeed it will be a drama for Europe, starting with the UK, because it will mean that a region can disobey the rule of law.”

“This is not a dispute between Madrid and Catalonia. On the one side is a democratic Spain and its independent judicial system, and on the other side not Catalonia, but a group of radical nationalists and leftwing extremists in the regional power that are not complying with the law,”

Which perhaps explains how aggressive Spanish authorities are in their efforts to stop any voting taking place.

The Civil Guard, acting on orders from the High Court in Catalonia, entered and shut down 29 database and census applications at the Catalan government’s telecommunications centre on Saturday.

Additionally, as DPA reports, the central authorities in Madrid have shut down the electronic vote-counting system in Catalonia in a further effort to prevent Sunday’s planned vote on independence for the region.

This “further strike against the illegal proclamation” of the referendum “was carried out within the scope of the law,” the spokesman said.

But as tensions come to a boiling point across Catalonia, separatists are occupying more than 160 schools designated as polling stations on Saturday in an attempt to keep them open ahead of Sunday’s referendum on independence from Spain.

“The history of my country is going to be decided in the next few hours, so there’s no way I’m going to be staying at home in bed and watch it on TV,” said Eduard Elías, 50, a computer science engineer at a school in the Raval neighborhood of Barcelona, adding that he would leave only if the confrontation became violent.

“Imagine you would have been offered the chance to fight alongside George Washington,” Mr. Elías said.

“At that time, revolution meant weapons and war, but we’re now in the 21st century and we will have our paper ballots instead to bring about real change.”

But, as The FT reports, a top Spanish official in Catalonia said that police had sealed off more than half of the 2,315 designated polling stations.

Spanish national police and their Catalan counterparts have orders to close all polling stations in the region by 6am on Sunday.

Spanish courts have ruled the referendum illegal and the central government in Madrid has voted to stop it.

Pro-independence supporters are hoping the police will be unable or unwilling to physically stop them voting them if they gather in sufficient numbers.

Catalan’s regional government, elected in 2015, has said that it will declare independence within 48 hours of a Yes vote.

This could force the Spanish state to step in and temporarily suspend Catalan autonomy, taking Madrid into uncharted constitutional territory.

During a demonstration in Barcelona on Friday night, regional president Carles Puigdemont said that the Catalan nation had “already won” ahead of Sunday’s vote.

“We have already won, we have won over the fears and the threats of an authoritarian state that didn’t want to let us get this far and tried to make us surrender at the first sign of difficulty,” he said.

“On Sunday we have a date with the future, and on Monday we will begin to take that path,” he said, although he gave no indication of how exactly they would go about trying to take independence in the event of a Yes vote.

Sunday’s vote is illegal and a declaration of independence would have little international support. However, a strong turnout and a majority Yes vote could embolden the long-term separatist cause.

Analysts also warn of the danger of increased anti-Madrid sentiment in the region if Spanish authorities crack down hard.

But not everyone supports this ‘illegal’ vote…

In response, many have claimed that the current secession movement should be blocked. Below we present a column by one reader, without modification. We have not edited it for content, and, like all articles, the article should not be interpreted as an official position of the Mises Institute.

Authored by Marta Hidalgo via The Mises Institute,

Unfortunately, the nationalists approach history in another temper. For them the past is not a source of information and instruction but an arsenal of weapons for the conduct of war. They search for facts which can be used as pretexts and excuses for their drives for aggression and oppression. If the documents available do not provide such facts, they do not shrink from distorting truth and from falsifying documents.

Spain is divided into Autonomous Communities and today each one has an Estatuto, similar to a constitution, which has given Catalonia, among others, regional autonomy. Catalonia controls its education and healthcare systems and it can impose taxes over events that are not already taxed by the central government or the councils, with some exceptions. Through this, Catalonia currently imposes 17 different taxes, and has one of the communities with the highest income taxes in the country.

Recent attempts at independence have been sought via changes to Catalonia’s estatuto — it’s constitution. The region’s first estatuto was voted on in 1979 by 59.7% of the population with 88.15% voting for approval. After years of claiming separate nationhood, and poor treatment at the hands of Madrid, Cataloinian leaders presented a new estatuto to increase regional independence in 2006. 49.42% of the voters turned out, with 73.9% voting for approval. In 2014, the first illegal referendum on independence took place, paid with taxpayers’ money from all of Spain. 37% of voters turned out, with 80% voting to approve. This means only 30% if potential voters voted for independence.

The Origins of the Separatist Movement

During the time of the ever-growing Spanish Empire, Spain was made up of kingdoms, but Catalonia was not one of them. It was made up of counties and there was a figure called the Count of Barcelona. The first time there is a mention of the term Cataluña is in the 12th century, when the King Alfonso II acknowledges it in a donation document to his wife. In 1714, the Bourbons and the House of Austria fought for the throne of Spain. Catalonians sided with the Austrians. There was no such thing as an invasion from Castilla; it was a Succession war, not a Secession War. In fact, one of the nationalist heroes, Rafael Casanova, famously called Barcelona to fight against the Bourbons for their honour, their nation and the freedom of all of Spain.

The Catalonian nationalist movement that rules today in the region started in the 19th century, at the time of the Romantic Era, and received the name of Reinaxença. It was a movement that focused on land and tradition, and its main goal was reviving the Catalan language. One of the founders of this movement, Francisco Cambó, became the leader of the Lliga Regionalista, a political party that existed from 1901 to 1936. After the death of Prat de la Riba in 1917. Cambó was part of the government of Spain in 1918 as Minister. In Cambó’s memoirs, he explained that the nationalist movement was of ridiculously small size when he started, almost like a cult. He explained that, as with all big collective movements, the quick expansion of Catalonian nationalism was due to propaganda based on some exaggerations and some injustices.

In 2012, something called Liquidity Fund for Autonomies was created to give communities access to grants and debt at almost 0% interest. Around 33% of this money has gone to Catalonia, even when they claim to be one of the richest, most innovative, civilised, and cosmopolitan regions of Spain.

One of the biggest cases of political corruption is that of the Pujol family. Jordi Pujol was the president of the Catalan government for 23 years and considered one of the fathers of the Catalan nation. It has been discovered that his family and he have a fortune of about 3.3 billion euros in tax havens. This money was hidden from the taxing authorities, and its origin is being investigated. The court exposed it came from political activities, mainly from illegal payments from business owners in search of a public contracts. Sadly, it is not the only case of this kind.

The idea that the Catalan language is being endangered, continues to be spread by the nationalist movement. The reality is only half of Catalonians have Spanish (i.e., Castilian) as a mother tongue, a fact that has been fought through the immersion system. The law says parents can choose the language they want their children to study in, but it is not being applied, even after favourable rulings from the Supreme Court. Moreover, it is required by law in Catalonia that the name of your business must be in Catalan, or you risk a fine, and that you must speak it if you want a public job as policeman or doctor, even when 98% of the population speaks Spanish.

I want freedom for Catalonia, and if it means they are out of Spain, so be it. But it must be done legally. The Spanish constitution established the country is a democratic and constitutional monarchy, and sovereignty resides in the Spanish people.

More than 90% of Catalonians voted yes to the Spanish constitution. To change the current political system, a referendum should start in the national Congress, with a law approved by the absolute majority in Parliament. Via this system, it would be possible to call a referendum in Catalonia to check the reality of the secessionist claims among the people, but this possibility is not entertained by the nationalists. The Constitution, and the opinion of those who are not in favour of secession, who feel both Spanish and Catalonian, who don’t get involved in the political agenda of Catalonian nationalists as we saw in 2014, must be respected too. But if nationalists carry out that referendum, they might lose; propaganda only gets you so far.

Still, as ABC reports, Barcelona is bracing for what could be the worst civil confrontation since democracy was restored in the 1980s.

“Neither side is listening to the other side anymore,” Carles Castellanos, a 75-year-old retired teacher and prominent political activist, said.

“If the Spanish government had properly addressed the requests of Catalonia in the past and not rejected negotiations, it wouldn’t have come this far. Now both sides have become more extreme in their positions.”