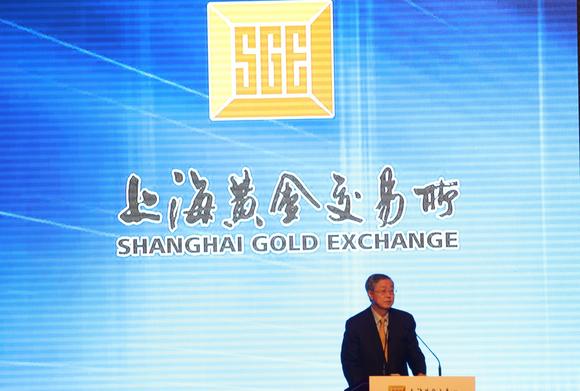 Yuan-denominated gold futures have been traded on the Shanghai Gold Exchange since April 2016 as part of the country’s effort to reduce the pricing power of the U.S. dollar. © Imaginechina/AP Images

DENPASAR, Indonesia — China is expected shortly to launch a crude oil futures contract priced in yuan and convertible into gold in what analysts say could be a game-changer for the industry.

The contract could become the most important Asia-based crude oil benchmark, given that China is the world’s biggest oil importer. Crude oil is usually priced in relation to Brent or West Texas Intermediate futures, both denominated in U.S. dollars.

China’s move will allow exporters such as Russia and Iran to circumvent U.S. sanctions by trading in yuan. To further entice trade, China says the yuan will be fully convertible into gold on exchanges in Shanghai and Hong Kong.

The Shanghai International Energy Exchange has started to train potential users and is carrying out systems tests following substantial preparations in June and July. This will be China’s first commodities futures contract open to foreign companies such as investment funds, trading houses and petroleum companies.

Most of China’s crude imports, which averaged around 7.6 million barrels a day in 2016, are bought on long-term contracts between China’s major oil companies and foreign national oil companies. Deals also take place between Chinese majors and independent Chinese refiners, and between foreign oil majors and global trading companies.

Alan Bannister, Asia director of S&P Global Platts, an energy information provider, said that the active involvement of Chinese independent refiners over the last few years “has created a more diverse marketplace of participants domestically in China, creating an environment in which a crude futures contract is more likely to succeed.”

China has long wanted to reduce the dominance of the U.S. dollar in the commodities markets. Yuan-denominated gold futures have been traded on the Shanghai Gold Exchange since April 2016, and the exchange is planning to launch the product in Budapest later this year.

Yuan-denominated gold contracts were also launched in Hong Kong in July — after two unsuccessful earlier attempts — as China seeks to internationalize its currency. The contracts have been moderately successful.

The existence of yuan-backed oil and gold futures means that users will have the option of being paid in physical gold, said Alasdair Macleod, head of research at Goldmoney, a gold-based financial services company based in Toronto. “It is a mechanism which is likely to appeal to oil producers that prefer to avoid using dollars, and are not ready to accept that being paid in yuan for oil sales to China is a good idea either,” Macleod said.

These countries would be less vulnerable to Washington’s use of the dollar as a “soft weapon,” if they should fall foul of U.S. foreign policy, he said. “By creating a gold contract settled in renminbi [an alternative name for the yuan], Russia may now sell oil to China for renminbi, then take whatever excess currency it earns to buy gold in Hong Kong. As a result, Russia does not have to buy Chinese assets or switch the proceeds into dollars,” said Gave.

Grant Williams, an adviser to Vulpes Investment Management, a Singapore-based hedge fund sponsor, said he expects most oil producers to be happy to exchange their oil reserves for gold. “It’s a transfer of holding their assets in black liquid to yellow metal. It’s a strategic move swapping oil for gold, rather than for U.S. Treasuries, which can be printed out of thin air,” he said.

Saudi Arabia, a U.S. ally, is a case in point. China proposed pricing oil in yuan to Saudi Arabia in late July, according to Chinese media. It is unclear if Saudi Arabia will yield to its biggest customer, but Beijing has been reducing Saudi Arabia’s share of its total imports, which fell from 25% in 2008 to 15% in 2016.

Chinese oil imports rose 13.8% year-on-year during the first half of 2017, but supplies from Saudi Arabia inched up just 1% year-on-year. Over the same timeframe, Russian oil shipments jumped 11%, making Russia China’s top supplier. Angola, which made the yuan its second legal currency in 2015, leapfrogged Saudi Arabia into second spot with an increase of 22% in oil exports to China in the same period.

If Saudi Arabia accepts yuan settlement for oil, Gave said, “this would go down like a lead balloon in Washington, where the U.S. Treasury would see this as a threat to the dollar’s hegemony… and it is unlikely the U.S. would continue to approve modern weapon sales to Saudi and the embedded protection of the House of Saud [the kingdom’s ruling family] that comes with them.”

The alternative for Saudi Arabia is equally unappetizing. “Getting boxed out of the Chinese market will increasingly mean having to dump excess oil inventories on the global stage, thereby ensuring a sustained low price for oil,” said Gave.

But the kingdom is finding other ways to get in with China. On Aug. 24, Saudi Vice Minister of Economy and Planning Mohammed al-Tuwaijri, told a conference in Jeddah that the government was looking at the possibility of issuing a yuan-denominated bond. Saudi Arabia and China have also agreed to establish a $20 billion joint investment fund.

Furthermore, the two countries could cement their relationship if China were to take a cornerstone investment in the planned initial public offering of a 5% state in Saudi Aramco, Saudi Arabia’s national oil company. The IPO is expected to be the largest ever, although details on the listing venue and valuation are yet scant.

If China were to buy into Saudi Aramco the pricing of Saudi oil could shift from U.S. dollars to yuan, said Macleod. Crucially, “if China can tie in Aramco, with Russia, Iran et al, she will have a degree of influence over nearly 40% of global production, and will be able to progress her desire to exclude dollars for yuan,” he said.

“What is interesting is that China’s leadership originally planned to clean up the markets next year, but brought it forward to this year. One interpretation of that change is that they have brought forward the day when they pay for oil in yuan,” said Simon Hunt, a strategic adviser to international investors on the Chinese economy and geopolitics.

China is also making efforts to set other commodity benchmarks, such as gas and copper, as Beijing seeks to transform the yuan into the natural trading currency for Asia and emerging markets.

Yuan oil futures are expected to attract interest from investors and funds, while state-backed oil majors, such as PetroChina and China Petroleum & Chemical (Sinopec) will provide liquidity to ensure trade. Locally registered entities of JPMorgan, a U.S. bank, and UBS, a Swiss bank, are among the first to have gained approval to trade the contract. But it is understood that the market will be also open to retail investors.