What If The American People Knew What Was Really Going On? 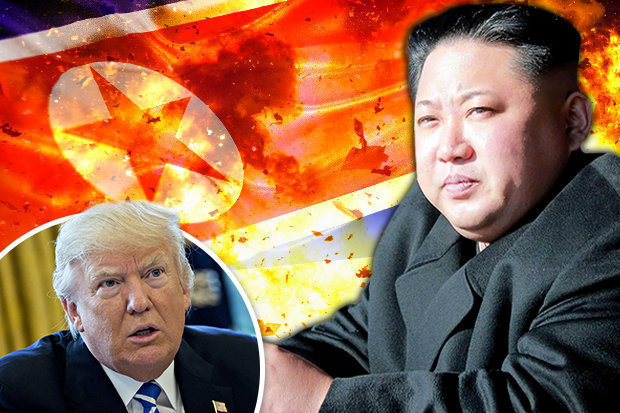 What If The American People Knew What Was Really Going On?

by Patrick J McShay
“North Korea best not make any more threats, or they will be met with fire and fury like the world has never seen ” President Donald J Trump

Based on a report from the Japanese Defense Ministry, North Korea has produced a compact nuclear warhead that can be placed inside one of its advanced missiles, which we are told is now capable of reaching half of the United States. Last week on the Jim Fetzer Show Dennis Cimino, former top electronics trouble shooter for the US Navy and a knowledgeable expert on the 911 attacks and other military matters, said these claims are highly exaggerated. The always obstinate John “Traitor” McCain, who seems to want to bomb everybody, says he is very concerned about the harsh rhetoric from the President. Since Tillerson said yesterday that North Korea poses no imminent threat and diplomacy, not military action seems to be the only reasonable option, why hasn’t this administration opened the door to talks with Kim Jong Un, instead of more sanctions and threats which are not working. After the unnecessary missile strikes in Syria based on phony intelligence, I’m not sure who the bigger hothead is here, Trump or Kim.

This is not the war McMaster and his Neo Con pals McCain, Graham and the rest had in mind. They were more than happy to pretend to fight ISIS in Syria and while continuing their attacks on Assad’s troops until they could force him to abdicate. Had Trump directed the same rhetoric at Assad that he used with Kim, McCain would have been very pleased. Journalist Marcus Papadopoulos in a recent interview with Balkins Post said that the flow of weapons from the US to the Syrian rebels hasn’t slowed down one bit. The Pentagon continues to support the Islamic Wahhabist terrorists from Saudi Arabia who have continue their attacks in Syria This proves that Saudi Arabia and of course Israel, who will be the biggest beneficiary of Assad’s ouster, continue to be the most destabilizing forces in th Middle East and not Iran which our government would have us believe.

Is this latest North Korean crisis just a smokescreen to take our attention away from the latest news coming out in the last few days about the traitors in Mr. Trump’s cabinet. Roger Stone is reporting on infowars.com that Israeli Intelligence reports that they have intercepted communications showing definitively that White House National Security Advisor, H.R. McMaster, is communicating with Jewish billionaire, globalist and known Trump hater who has threatened to “take down President Trump for the New World Order.” McMaster is giving him updates on what is talked about in the Oval office on a regular basis. Stone asks, “under what circumstance would Donald Trumps National Security Advisor be briefing George Soros, a sworn enemy of the Trump administration.”?

McMaster also once worked for a think tank funded by Soros.The question is why would Trump pick someone with this guy’s background and known associates for his national security advisor? Stone is also reporting that Shawn Spicer and Reince Priebus were working hard to make certain that the Presidental news summary did not include reports from any alternative news sites. Stone, a longtime friend of Trump’s said he is being kept in the dark about a number of things and McMaster is part of that group. There is an ongoing slow motion coup in place and McMaster needs to be purged along with everyone else still in place from the Obama administration. The gateway pundit previously reported McMaster was firing anyone who mentioned Obama holdovers or criticized Islam. Knowing this, how can Trump not fire McMaster immediately. These people Trump has chosen for important positions in his cabinet reflect badly on his ability to make good decisions; Mainstream news channels have completely ignored this report.

Tom Fitton from Judicial Watch recently stated that Jeff Sessions is compromised and unless Trump fires him he will be taken out. I’ve followed Judicial Watch for almost 20 years and trust his reporting. Fitton is reporting that Sessions is protecting Hillary Clinton. Intelligence expert Tom Heneghan has reported that Sessions has been offered a $15 million bribe to do so. The recent release of documents pertaining to Bill Clinton and Loretta Lynch’s clandestine meeting have been almost completely blacked out by the Jeff Sessions Justice Department. Why would Sessions cover up this document if he weren’t compromised and working for the deep state? Trump .should order the immediate release of these documents. The fact that this investigation into Russian collusion is moving forward without a shred of evidence should be troubling to every American, not just Trump supporters.

Former Trump campaign chairman Paul Manafort’s home was raided yesterday with a warrant looking for evidence of wrongdoing. Everyone knows, and Manafort is on record that he did business in Ukraine in the past as have a number of people in the Obama Administration including Hillary Clinton and her husband Bill. Manafort did business in Ukraine working for a consulting firm that interacted with the government of Victor Yanukovych., Who was ousted in a coup engineered by Hillary Clinton and Barack Obama. Hillary and Bill Clinton’s Foundation was paid $144 million for selling 20% of America’s Uranium to Russia. Where are the indictments for these two crooks? Pulitzer prize winning Journalist Seymour Hersh is reporting that he has evidence that the Russian hacking is nonsense and he is being completely ignored by the media. Why? Veteran Intelligence Professionals for Sanity is a group of former NSA and CIA professionals who have called this investigation baseless and have said the claim that 17 government agencies agree that there was a hack by Russia is ludicrous. Where is Fox News, CNN or MSNBC on this important story?

Ed Klein, in a story from Newsmax, is now reporting that Sessions has offered Hillary Clinton a plea agreement. Why would Session’s do this? There was never a proper investigation done during the Obama Administration, and Sessions starts by offering a plea deal to the Godfather? This is ludicrous and speaks volumes about who controls the corrupt little General.

Sessions has spent most of the 6 months of Trumps presidency unconstitutional asset forfeiture laws that mostly steal assets from innocent citizens. Eighty percent of the assets seized last year were taken from people who hadn’t been convicted of a crime. Over $4 billion in assets have been seized since 2007. Sessions other pet project is jailing medical Marijuana patients and shutting down dispensaries in states that have legalized Cannabis. Sessions needs .to be fired immediately for all our sake.

Americans naively believe that we still have a free press in this country. What we have today is no different than Soviet Cold War propaganda read by actors and actresses in short skirts. Every word is carefully scripted and is not meant to inform you but to confuse you. Few people under 50 pay any attention to the news at all, which is why it is so easy for them to be led around like sheep with these ongoing false narratives. The flood of illegals and refugees was called for in the “Cloward and Piven Plan” back in 1966 to overload and blow up the US Welfare system. A recent study showed that illegal immigration costs taxpayers $150 billion per year. Where is the outrage? Ronald Reagans former Budget Director, David Stockman, is saying that there will be no tax cuts and that we are seeing a Stock Market that is manipulated and overpriced. He says what we will likely see is a fiscal bloodbath as early as this fall. The economy and the bloated Stock Market are what Trump has touted since taking office. A major correction could be the end for Trump.

It still amazes me that there are still people who believe the ridiculous conclusions of the 911 Commission. Americans still believe that we are fighting ISIS in the Middle East since there is a mountain of evidence that ISIS and other terror groups, our government likes to refer to as rebels, are trained, funded and armed by the US and her allies. These include Israel, Turkey. and Saudi Arabia. Now we have non stop coverage of nukes from North Korea. Are we now being prepared for a false flag terror attack to be blamed on North Korea? Martial Law and gun confiscation would follow. The time to be concerned for this country can’t wait another day. Trump needs to get rid of the traitors and Obama holdovers in his administration immediately or he won’t last to the end of his first term.