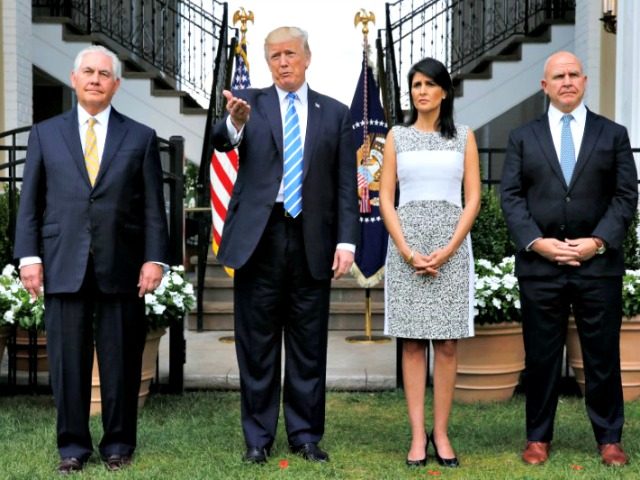 TMR Editor’s Note:
With Trump’s latest threats against Venezuela, it’s clear that his administration has been completely taken over by Deep State.

The American people who voted for Trump did so because of his promise to stop the wars. He promised to stop the endless warmongering yet has done the opposite.  His betrayals are now too numerous to list in this regard.

Does the President not understand that if he loses the support of his base, he loses everything?  When the C.I.A. springs their well-planned coup, there will be no one to stop them. Trump’s only protection at this point is the patriot movement, and those folks DO NOT WANT MORE WAR. They also want the ongoing wars terminated post-haste.

If the POTUS does not understand this, he’s in for a rude awakening.  It’s not good to break such a solemn promise as he made to the nation throughout the entire 2016 election cycle.

‘This is not a time for loose talk’: Trump’s latest threats against Venezuela could haunt him

President Donald Trump said late Friday that he was “not going to rule out a military option,” in response to the turmoil in Venezuela.

During a press conference outside his Bedminster resort in New Jersey, Trump said, “We have many options for Venezuela, including a possible military option, if necessary.”

He demurred when asked for specifics on any such plan.

“On a Friday night in August in Washington,” Trump’s remarks “caught the Pentagon by more surprise than anything else,” CNN Pentagon correspondent Barbara Starr said.

But not long after his statement, the Pentagon said the White House had not given it any orders regarding Venezuela but it was “prepared to support … government efforts to protect our national interests and safeguard US citizens.”

Earlier this month, National Security Adviser H.R. McMaster said he didn’t think outside intervention in Venezuela was a possibility.

The unexpected remarks were met with dismay by many, both for the likely deleterious effects they would have on international efforts to resolve the crisis in Venezuela as well as for what they seemed to say about the way the Trump administration is approaching international affairs. Leon Panetta, who served as director of the CIA and secretary of defense under President Barack Obama, told Wolf Blitzer on Friday night that he had heard nothing indicating the US was considering military action in Venezuela and was critical of the idea.

“Considering the number of flash points we’re dealing with in a very dangerous world, the last thing we need is another flash point where we may possibly use military force,” Panetta said.

Though Trump’s ability to talk has brought him success in the past, Panetta added, “when you’re president of the United States, when you’re the commander and chief, this is not reality TV. This is a situation where you can’t just talk down to everybody in the world and expect them to do what you think is right. These are leaders in these countries. They worry about their countries. They worry about what’s going to happen. And they take the president of the United States literally. Words count.” Fans shout slogans against Venezuelan President Nicolas Maduro’s government during a ceremony for Venezuela’s under-20 soccer team upon their arrival from the FIFA U-20 World Cup, in Caracas, June 13, 2017.    Thomson Reuters

Reaction to Trump’s comments on Venezuela was also negative.

The embattled Venezuelan president, Nicolas Maduro, has faced months of protests by anti-government demonstrators. Those protests have left at least 120 people dead and led to thousands of arrests.

Maduro has long insisted that his country is dealing with foreign interference, backed by the US, waging an “economic war” and seeking to undermine his government. Maduro has called Trump an “emperor,” and the US president has called Maduro a “dictator.”

The immediate response to Trump’s remarks was that they would lend weight to Maduro’s claims.

“Open talk of military intervention lets Maduro say he was right all along & his followers fear enough to agree,” Greg Weeks, a political-science professor at UNC Charlotte, said on Twitter.

David Smilde, a professor at Tulane and specialist on Venezuela, saidTrump’s comments were “made to order” for the Venezuelan president and could lead to more repression of the opposition. “Maduro is going to play this like a fiddle,” Frank Mora, undersecretary of defense for the Western Hemisphere during the Obama administration, told The Wall Street Journal. “For much less, he has accused the U.S. of imperialism. And now he’s got the president of the US talking about military action. I mean, this just plays right in to [his] whole narrative.”

This week, 17 countries from the region condemned the “breakdown of democratic order” in Venezuela, but Trump’s comments appear likely to send a chill through a region that had started to move toward action against the Venezuelan government and to isolate Maduro.

Mark Feierstein, who was senior director for Western Hemisphere affairs and special assistant to Obama, said Trump’s comments would set back the work of his National Security Council by “undercutting Venezuelan opposition and alienating the region.” A government supporter holds a poster with images of Venezuela’s late President Hugo Chavez and President Nicolas Maduro during a simulation of the government’s official July 30 vote for a new assembly, in Caracas, July 16, 2017.    REUTERS/Christian Veron

“Maduro’s absurd claims that he’s protecting Venezuela against U.S. threat have now been validated,” Feierstein saidon Twitter. “He must be thrilled with Trump statement.”

The US has hit Venezuelan officials with several rounds of sanctions over the past few weeks.

Thirteen were sanctioned during the last week of July, days ahead of a widely rejected constituent-assembly vote that critics have said was aimed at consolidating the Maduro government’s power.

Following the vote, Maduro himself was hit with sanctions, and this week the US government sanctioned eight more officials.

Vice President Mike Pence is heading to Latin America next week to offer support for the Colombian peace process and address the increase of coca cultivation in that country, as well as start work on possible bilateral trade deals. Pence’s trip was also meant to reinforce regional opposition to Maduro’s government.