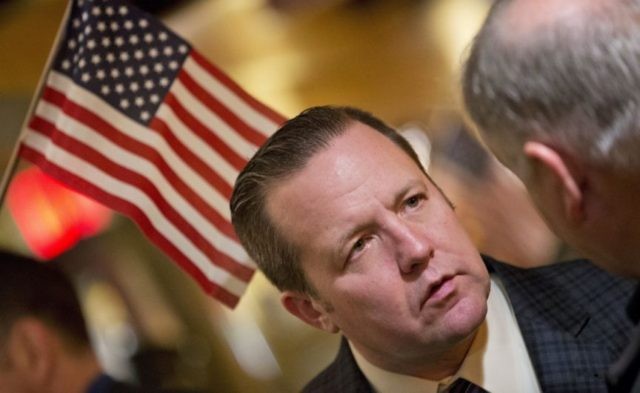 Corey Stewart, a Republican who is challenging Tim Kaine (D-VA) for his Senate seat, condemned the violence which resulted in the murder of three people at the “Unite the Right” white nationalist demonstration, as well as “counterprotesters” including Antifa, on Saturday in Charlottesville, Virginia.

So far three people have died, including two Virginia state troopers who perished in a helicopter crash and one of over 15 people injured when a vehicle drove into a crowd of protesters at Saturday’s rally.

Reports indicate the suspect, James Alex Fields, 20, is being held without bail for second-degree murder among other charges in the Charlottesville hit-and-run.

“There is no need for violence in a constitutional republic,” Stewart told Breitbart News. He reiterated this message a short time after the interview during an address he gave about Saturday’s events in Charlottesville over Facebook Live.

“I’m not going to play their game,” Stewart said of the left, several members of the Democratic Party, and establishment Republicans, adding:

The left has been violently attacking conservative politicians and conservatives. And the left-wing mainstream media has been essentially condoning it. Democratic and other left-leaning politicians very rarely ever condemn violence that is perpetrated by the left. There’s a double standard and some hypocrisy here by the media, by the left and even by a lot of establishment Republicans.

We have the violent left which recently attacked a U.S. Congressman [Steve Scalise], which has been attacking Trump supporters across the country, and I never hear Democratic politicians condemning them. I’m not going to play their game. I am not going to condemn anyone other than the criminal. We always have to protect citizens who are trying to exercise their First Amendment rights. From my perspective, there were a lot of left-wing agitators who violently attacked citizens who were trying to espouse their views last night and today.

Rep. Steve Scalise (R-LA), the House Majority Whip, was in intensive care with a life-threatening bullet wound through his hip after James T. Hodgkinson, 66, of Belleville, Illinois opened fire on members of congress during a baseball practice in June.

Of Tim Kaine, Stewart said, “I find it reprehensible that he stated he was proud of his son, who is a violent, left-wing agitator who was arrested in Minneapolis,” Stewart said. “And there is a great example of Tim Kaine and other Democrats being complete hypocrites as they condemn right-wing violence but are silent, and are even proud, of the violence that is perpetrated by left-wingers like Tim Kaine’s son who is a member of antifa.”

Kaine issued a statement about the “horrifying white supremacist demonstrations and violence in Charlottesville:”

My full statement on the horrifying white supremacist demonstrations and violence in Charlottesville: pic.twitter.com/IFXmqFLv4i

He went on to say:

But that also emphasizes the need to protect our constitutional right, especially our right to free expression. And I think that one of the reasons why this rally was held in the firts place is because people didn’t feel that their constitutional rights and freedom of expression are being protected, because the left has been suppressing viewpoints that it doesn’t agree with in this country. And that’s how it should be.

Steward also noted, “We need an honest and fair press” of news reports coming out of CNN and MSNBC. “We are not seeing that.”

Instead, Stewart stated his belief that the left-wing media will use Saturday “as an excuse to further crack down on conservative speech. They will not only do it in the universities, where they have created safe spaces.” He said the left is trying to turn the entire nation into a safe space, adding, “Gov. McCauliffe will try to make all of Virginia a safe place. All of those efforts will fail.”

In closing, Stewart said, “When I am the United States Senator from the commonwealth of Virginia I will always work to defend everyone’s free speech regardless of which end of the political spectrum it comes from; that must be our goal. That is the number one job of every single elected official here in the United States. to protect the lives and rights of our citizens.”