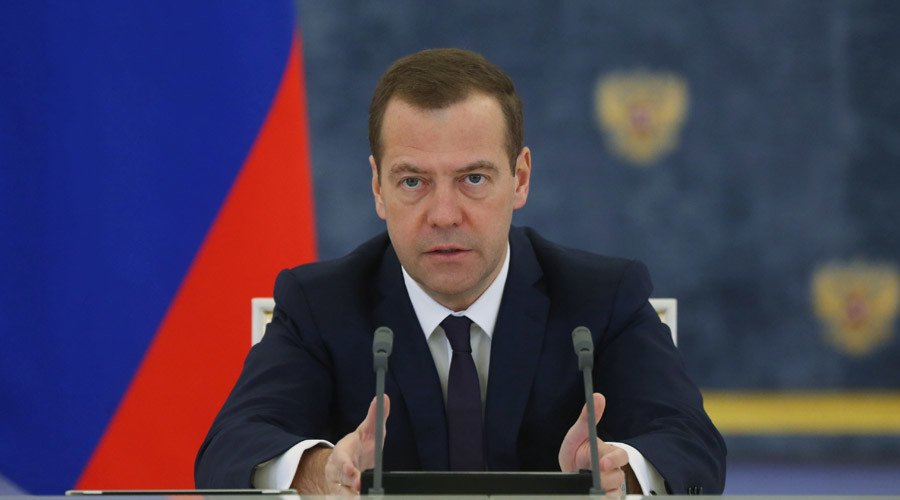 Several hours after President Trump officially signed the new Russian sanctions into law – despite his reservations and his statement that while he favors “tough measures to punish and deter aggressive and destabilizing behavior by Iran, North Korea, and Russia, this legislation is significantly flawed” – Russia responded when moments ago Russian Prime Minister Dmitry Medvedev said on his FaceBook page that any hopes of improving Russian relations with the new US administration are dead, that the Trump administration demonstrated complete impotence by transferring executive power to Congress “in the most humiliating manner”, and most notably, that the US just declared a full-scale trade war on Russia.

The signing of new sanctions against Russia into law by the US president leads to several consequences. First, any hope of improving our relations with the new US administration is over. Second, the US just declared a full-scale trade war on Russia. Third, the Trump administration demonstrated it is utterly powerless, and in the most humiliating manner transferred executive powers to Congress. This shifts the alignment of forces in US political circles.

What does this mean for the U.S.? The American establishment completely outplayed Trump. The president is not happy with the new sanctions, but he could not avoid signing the new law. The purpose of the new sanctions was to put Trump in his place. Their ultimate goal is to remove Trump from power. An incompetent player must be eliminated. At the same time, the interests of American businesses were almost ignored. Politics rose above the pragmatic approach. Anti-Russian hysteria has turned into a key part of not only foreign (as has been the case many times), but also domestic US policy (this is recent).

The sanctions codified into law will now last for decades, unless some miracle occurs. Moreover, it will be tougher than the Jackson-Vanik law, because it is comprehensive and can not be postponed by special orders of the president without the consent of the Congress. Therefore, the future relationship between the Russian Federation and the United States will be extremely tense, regardless of the composition of the Congress or the personality of the president. Relations between the two countries will now be clarified in international bodies and courts of justice leading to further intensification of international tensions, and a refusal to resolve major international problems.

What does this mean for Russia? We will continue to work on the development of the economy and social sphere, we will deal with import substitution, solve the most important state tasks, counting primarily on ourselves. We have learned to do this in recent years. Within almost closed financial markets, foreign creditors and investors will be afraid to invest in Russia due to worries of sanctions against third parties and countries. In some ways, it will benefit us, although sanctions – in general – are meaningless. We will manage.

Separately, Russia’s foreign minister Sergey Lavrov said that Russia retains the right to impose new counter-measures, adding the US sanctions are short-sighted, and risk harming global stability. He concludes that and attempts to pressure Russia will not make it change course.

Echoing Lavrov, earlier on Wednesday the permanent representative to the UN, Vassily Nebenzia said Moscow “won’t bend” and has no plans to change its policies following Donald Trump’s signing of new anti-Russian sanctions.

“Those who invented this bill, if they were thinking that they might change our policy they were wrong, as history many times proved. They should have known better that we do not bend and do not break,” Nebenzia told journalists in New York.

“Some of the US officials were saying that this is a bill that might encourage Russia to cooperate… This is a strange form of encouragement. But it is not our habit to be resentful children,” continued the diplomat, who promised that Moscow would “not relent on finding means and ways” to cooperate in the international arena over issues such as Syria.

The Kremlin also chose not to escalate the situation further.

“This changes nothing. There is nothing new here,” Vladimir Putin’s press secretary, Dmitry Peskov, told the media in Moscow. “Counter-measures have already been taken.”

And now we await a similar announcement from the European Union.

Surreal headline of the day pic.twitter.com/CsIMNBI49O