One Dead, Many Injured After Car Plows Into Protesters In Charlottesville, Driver In Custody 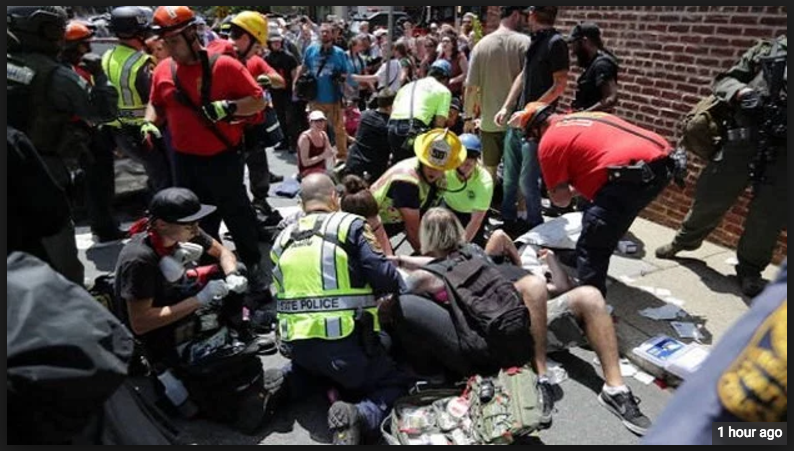 One Dead, Many Injured After Car Plows Into Protesters In Charlottesville, Driver In Custody

Update 8: In the latest development in what was already a bizarre, tragic day, a police helicopter crashed into a wooded area near a gold course in Charlottesville, not far from where the “Unite the Right” rally was being held.

The crash happened around 5 p.m. ET according to clips and photos posted on twitter. A local ABC News affiliate has released audio of the emergency dispatch reporting the helicopter crash.

It is unknown if there are casualties or injuries.

Update 7: The organizer of today’s rally that drew hundreds of white nationalists and various extremists to Charlottesville said he disavows the violence that eroded it. According to AP, Jason Kessler said in an interview Saturday evening that whoever drove a car into a group of counter-protesters “did the wrong thing.” He said he was saddened that people were hurt. Kessler is a local blogger and activist who described the event as a pro-white rally. He planned it to protest the city’s decision to remove a Confederate monument. He also criticized law enforcement’s response to the event, which was dispersed before speakers could take the stage. He said they did a poor job controlling the chaos to allow free speech.

Update 6: Citing a state official, AP confirms that the driver of a car that plowed into a group of marchers in Charlottesville is in police custody. Virginia Secretary of Public Safety Brian Moran said the driver, a man, has been arrested. Moran did not immediately provide a name of the driver.

Update 5: Meanwhile back in Charlotesville, the Police have shut down the block as a helicopter hovers above. Additionally, the UVA Medical Center official says one person has died and 19 were injured after a car plowed into a group of protesters in Charlottesville. University of Virginia Medical Center spokeswoman Angela Taylor confirmed the death to The Associated Press.

Update 4: Discussing today’s violence and tragic incident in Charlottesville, Trump called for “a swift restoration of law and order” saying “when I watch Charlottesville, to me it’s very, very sad” adding that “the hate and division must stop, and must stop right now”, and notes that “we condemn in the possible strongest terms this egregious display of hatred, bigotry and violence on many sides.” Trump also said that “we have to come together as Americans with love for our nation and true affection for each other” adding that “I want to salute the great work of the state and local police in Virginia … the National Guard has been working smart and working hard, they’ve been doing a terrific job.”

Some other quotes via Axios:

"We condemn in the possible strongest terms this display of hatred, bigotry and violence," Pres. Trump says. https://t.co/tZfyR3BB6h pic.twitter.com/ZqWGyNR8Mu