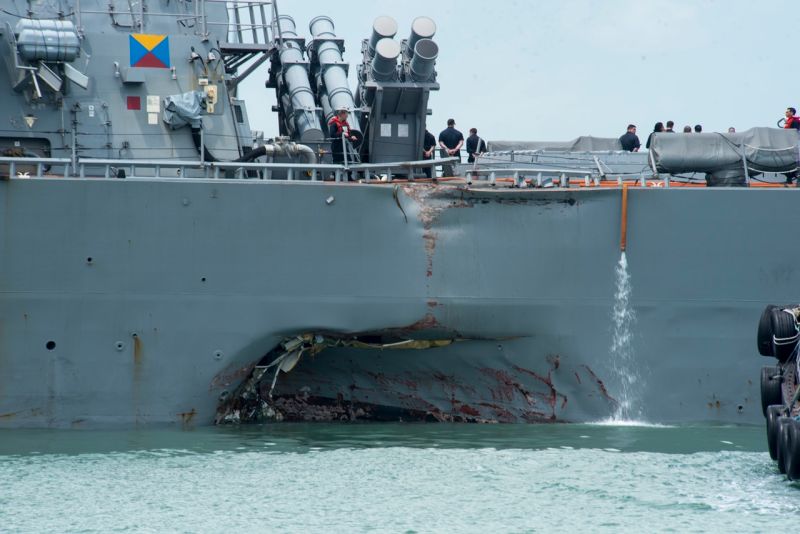 Damage to the USS John S. McCain is visible as it steers towards Changi Naval Base in Singapore following a collision (U.S. Navy photo)

Photos and videos have emerged from the early Monday collision involving the guided-missile destroyer USS John McCain and an oil/chemical tanker called the Alnic MC. As reported late on Sunday, five sailors were injured in the collision, which occurred east of the Strait of Malacca, and a search is underway for 10 more who remain missing.

The collision is an unsettling repeat of the June collision between the USS Fitzgerald and container ship the ACX Crystal, the worst naval accident in decades. Ultimately, the crash left seven sailors dead and resulted in career-ending penalties against the ship’s captain and other top officials.

The following YouTube videos show the gaping hole on the side of the ship where the collision occurred.

According to the 7th Fleet Commander, the collision was reported at 6:24 Japan Time. The crash occurred while the USS John McCain was on its way to a routine port call in Singapore. Photographic evidence confirms that the warship sustained damage to its port side aft. Search and rescue efforts are under way in coordination with local authorities, the Navy said, although there is still no word on any casualties. The ship arrived safely in Singapore according to the 7th Fleet, which has released more photos of the USS John McCain on its twitter feed:

#USSJohnSMcCain Update: The ship has arrived pier side at Changi Naval Base in Singapore. pic.twitter.com/tjB783d8Yh

While investigations into the collision of the USS Fitzgerald appeared to quickly ascertain that personal error was responsible for the crash. However, before the final decision was released, early reports appeared to suggest that there might’ve been something wrong with the Destroyer’s navigation system. While naval accidents involving US service ships are extremely rare, there have now been two almost identical collisions in the span of a three months. In light of recent events, it is surprising that Russian hackers have not been blamed yet.