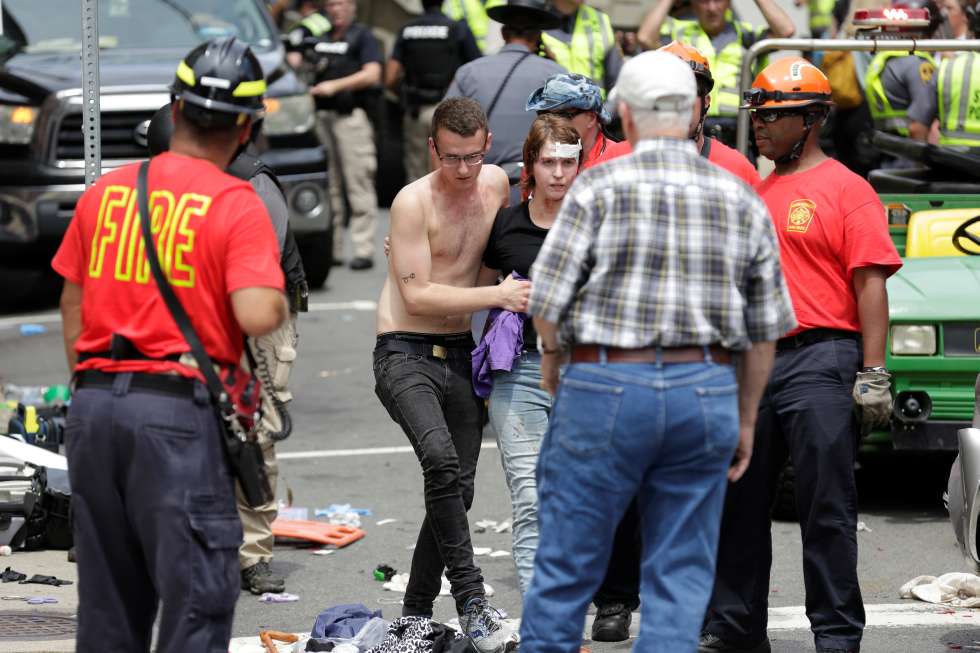 Signs of Charlottesville ‘white supremacist’ rally being a false flag

by Dr. Eowyn
Fellowship of the Mind

Last weekend, a planned “Unite the Right” rally in Charlottesville, Virginia, to protest the removal of Confederate monuments from public spaces, descended into violence when what the MSM describe as “white supremacists” clashed with counter-protesters, forcing the city to declare a state of emergency.

A white man named James Alex Fields, Jr. rammed his car into a group of counter-demonstrators, killing a liberal, Heather Heyer, and injuring 19. Fields is in police custody, denied bond, and charged with one count of second-degree murder, three counts of malicious wounding, failure to stop for an accident involving a death, and hit-and-run.

Evidence is mounting that the rally and violence may have been staged, although the car crashing into protesters was very real, as you can see in this video:

If the rally was staged, what happened in Charlottesville was a false flag — a traumatic public event staged by government to advance its covert agenda. However, the government is not the Trump administration, but the deep state that means to damage, discredit and remove President Trump by aligning him with the rally’s alleged white supremacists and neo-Nazis.

Incredibly, the leader of what the MSM call the rally’s “white supremacist Nazis” is a former avid Obama supporter and Occupy Wall Street protester named Jason Kessler, who supposedly did a 180° reversal and became a Trump supporter.

According to the Southern Poverty Law Center:

“Rumors abound on white nationalist forums that Kessler’s ideological pedigree before 2016 was less than pure and seem to point to involvement in the Occupy movement and past support for President Obama.

At one recent speech in favor of Charlottesville’s status as a sanctuary city, Kessler live-streamed himself as an attendee questioned him and apologized for an undisclosed spat during Kessler’s apparent involvement with Occupy. Kessler appeared visibly perturbed by the woman’s presence and reminders of their past association….

Regardless of Kessler’s past politics, the rightward shift in his views was first put on display in November, 2016 when his tirade against [Vice-Mayor of Charlottesville] Wes Bellamy began.”

In 2011, Jason Kessler worked for CNN as an “assignment editor”, but we are to believe that now he’s a neo-Nazi white supremacist?

If Jason Kessler, the leader of Unite the Right, is suspect, what about his group?

There is buzz on the Internet that Unite the Right is a George Soros-funded “honeypot psyop” of Antifa goons disguised as Nazis.

InfoWars‘ Alex Jones observed that the KKK protesters at Charlottesville actually were Jewish actors who looked like the cast of the TV sitcom Seinfeld. Jones said:

“Nothing against Jews in general, but they are leftist Jews that want to create this clash and they go dress up as Nazis. I have footage in Austin — we’re going to find it somewhere here at the office — where it literally looks like cast of ‘Seinfeld’ or like Howard Stern in a Nazi outfit. They all look like Howard Stern. They almost got like little curly hair down, and they’re just up there heiling Hitler. You can tell they are totally uncomfortable, they are totally scared and it’s all just meant to create the clash.”

“There were provocateurs on both sides of the crowd fomenting violence and creating justification for martial law.”

How many of the protesters, on either side, are real?

We know there are “public relations” firms that solicit actors for events, including rallies and protests. Below is a Craig’s List ad by Crowds on Demand — a Los Angeles public relations firm — soliciting “actors and photographers” in Charlotte, NC, to “participate” in “events”:

Here is what we are told about James Alex Fields, Jr., 20, the driver of the car that plowed into the crowd, killing Heather Heyer and injuring others (Heavy.com):

However, according to Ruby Henley of Investment Watch Blog (IWB), citing Tweeter “Whitehouse Plumber” @rharrisonfries (who identifies himself as a retired television broadcast manager and U.S. Navy), James A. Fields “was a supporter of Hillary Clinton and a member of Antifa funded by George Soros.”

More confusing still, according to former NSA operative Jim Stone, James Alex Fields Jr. is not who the MSM say he is:

“‘James Alex Fields Jr’ – supposedly of Maumee, OH – doesn’t turn up when you search his name on Intelius. Oh, plenty of James A Fields exist, but none 20 years old from OH (or VA or anywhere else in the USA).”

Using the people search engine Spokeo, I found there are 5,149 people named “James Fields” in the United States:

Stone claims that the man who actually crashed the car is “a seasoned military veteran” named James G. Field, age 32, and that the name of “the patsy” is actually James Bloom. Indeed, according to The Blade, the name of the paraplegic mother of “James A. Fields, Jr.” is Samantha Bloom, of Florence, Kentucky.

Spokeo says there is a “Samantha Lea Bloom,” aka Samantha Meyer, 49, whose most recent address is in Maumee, Ohio, and who had lived in Florence, Kentucky, and Silver Grove, Kentucky. Spokeo has no family members for Samantha Bloom. However, when she was in Silver Grove, she lived with a “James Meyer” (could this be “James A. Fields, Jr.”?)

Below are side-by-side pics of the driver in the car (screenshot taken from a video of Charlottesville), James Alex Fields Jr. (who Stone says is really named James Bloom), and James Field, 32.

Compare the side of the face and the mouth of the three men. To me, James Field, 32, more resembles the driver.

Charlottesville police were told by the mayor to stand down. Trial lawyer Robert Barnes @Barnes_Law, referring to a tweet by ACLU of Virginia, tweeted that:

“ACLU confirms that police were given stand-down order.This invited the violence the city used to shut down a court-permitted protest.”

“Antifa,” the openly communist, anti-white and violent thugs who exist solely to attack European-Americans, were out in force in the city, using the cowardly tactics they specialize in: spraying demonstrators with mace, throwing bottles and bricks, and attacking people with weapons (including a homemade flamethrower).

It is quite true, as VDARE.com reported, that the police did not protect [Unite the Right] demonstrators from Antifa and did little to prevent confrontations. Attendees of the demonstration, rather than walking a clear path to the park, were instead forced to walk through a line of screaming protesters….

Then activists, totally unprotected by police, were deliberately funneled into a gauntlet of attacking Communists, in a kind of Kill Zone. Injuries on both sides were predictable….

All of this occurred after a “state of emergency” had been declared and demonstrations were supposed to have been halted….

Violence did not just “break out” at Unite The Right. Attendees were attacked—by Leftists and by the police. They worked together as seamlessly as if they had common leadership.