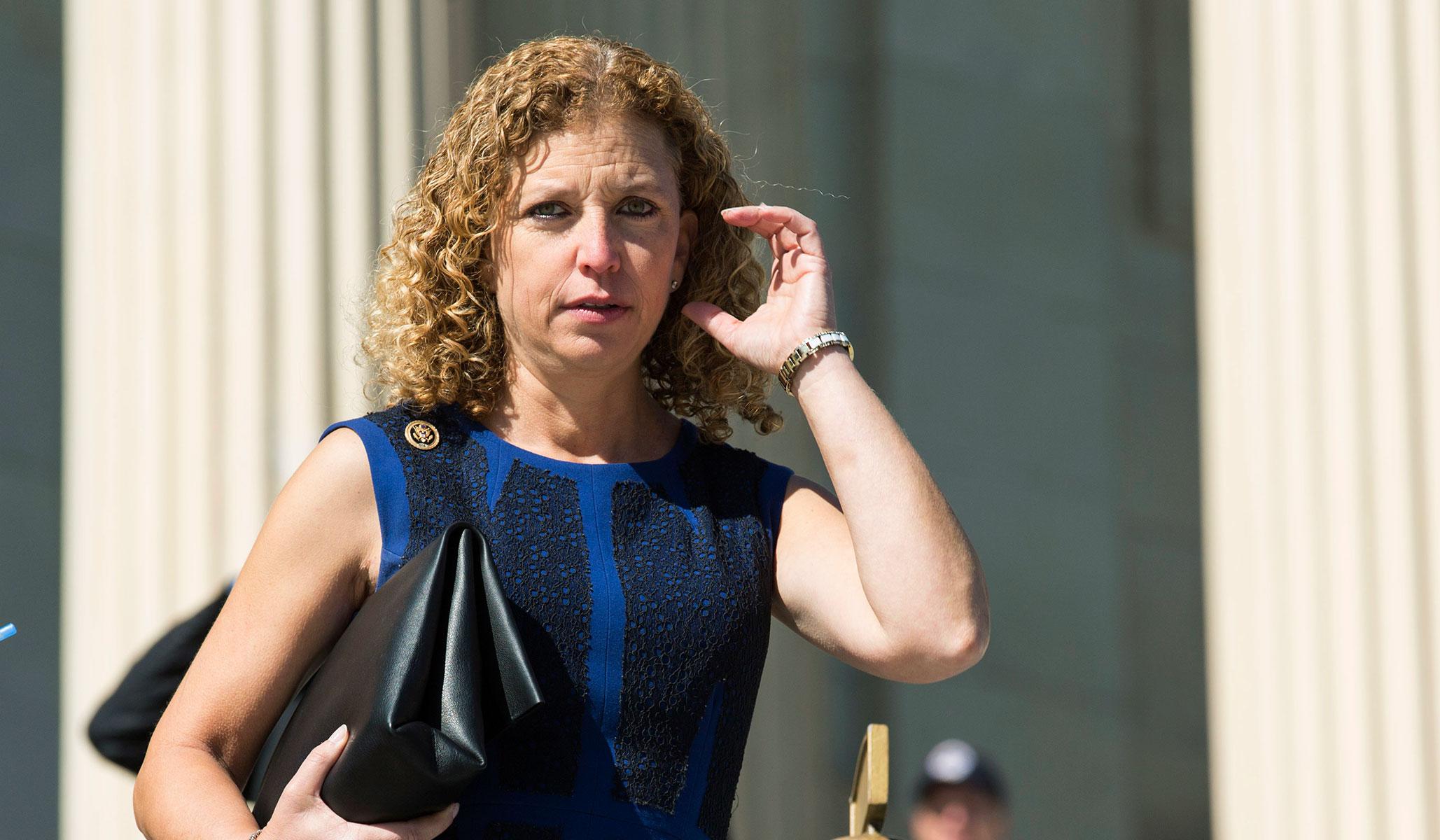 Debbie Wasserman Schultz and the Pakistani IT Scammers

In Washington, it’s never about what they tell you it’s about. So take this to the bank: The case of Imran Awan, Debbie Wasserman Schultz’s mysterious Pakistani IT guy, is not about bank fraud.

Yet bank fraud was the stated charge on which Awan was arrested at Dulles Airport this week, just as he was trying to flee the United States for Pakistan, via Qatar. That is the same route taken by Awan’s wife, Hina Alvi, in March, when she suddenly fled the country, with three young daughters she yanked out of school, mega-luggage, and $12,400 in cash.

By then, the proceeds of the fraudulent $165,000 loan they’d gotten from the Congressional Federal Credit Union had been sent ahead. It was part of a $283,000 transfer that Awan managed to wire from Capitol Hill. He pulled it off — hilariously, if infuriatingly — by pretending to be his wife in a phone call with the credit union. Told that his proffered reason for the transfer (“funeral arrangements”) wouldn’t fly, “Mrs.” Awan promptly repurposed: Now “she” was “buying property.” Asking no more questions, the credit union wired the money . . . to Pakistan.

As you let all that sink in, consider this: Awan and his family cabal of fraudsters had access for years to the e-mails and other electronic files of members of the House’s Intelligence and Foreign Affairs Committees. It turns out they were accessing members’ computers without their knowledge, transferring files to remote servers, and stealing computer equipment — including hard drives that Awan & Co. smashed to bits of bytes before making tracks.

They were fired in February. All except Awan, that is. He continued in the employ of Wasserman Schultz, the Florida Democrat, former DNC chairwoman, and Clinton crony. She kept him in place at the United States Congress right up until he was nabbed at the airport on Monday.

This is not about bank fraud. The Awan family swindles are plentiful, but they are just window-dressing. This appears to be a real conspiracy, aimed at undermining American national security.

At the time of his arrest, the 37-year-old Imran Awan had been working for Democrats as an information technologist for 13 years. He started out with Representative Gregory Meeks (D., N.Y.) in 2004. The next year, he landed on the staff of Wasserman Schultz, who had just been elected to the House.

Congressional-staff salaries are modest, in the $40,000 range. For some reason, Awan was paid about four times as much. He also managed to get his wife, Alvi, on the House payroll . . . then his brother, Abid Awan . . . then Abid’s wife, Natalia Sova. The youngest of the clan, Awan’s brother Jamal, came on board in 2014 — the then-20-year-old commanding an annual salary of $160,000.

A few of these arrangements appear to have been sinecures: While some Awans were rarely seen around the office, we now know they were engaged in extensive financial shenanigans away from the Capitol. Nevertheless, the Daily Caller’s Luke Rosiak, who has been all over this story, reports that, for their IT “work,” the Pakistani family has reeled in $4 million from U.S. taxpayers since 2009.

That’s just the “legit” dough. The family business evidently dabbles in procurement fraud, too. The Capitol Police and FBI are exploring widespread double-billing for computers, other communication devices, and related equipment.

Why were they paid so much for doing so little? Intriguing as it is, that’s a side issue. A more pressing question is: Why were they given access to highly sensitive government information? Ordinarily, that requires a security clearance, awarded only after a background check that peruses ties to foreign countries, associations with unsavory characters, and vulnerability to blackmail.

These characters could not possibly have qualified. Never mind access; it’s hard to fathom how they retained their jobs. The Daily Caller has also discovered that the family, which controlled several properties, was involved in various suspicious mortgage transfers. Abid Awan, while working “full-time” in Congress, ran a curious auto-retail business called “Cars International A” (yes, CIA), through which he was accused of stealing money and merchandise. In 2012, he discharged debts in bankruptcy (while scheming to keep his real-estate holdings). Congressional Democrats hired Abid despite his drunk-driving conviction a month before he started at the House, and they retained him despite his public-drunkenness arrest a month after. Beyond that, he and Imran both committed sundry vehicular offenses. In civil lawsuits, they are accused of life-insurance fraud.

Congressional Democrats hired Abid despite his drunk-driving conviction a month before he started at the House, and they retained him despite his public-drunkenness arrest a month after.

Democrats now say that any access to sensitive information was “unauthorized.” But how hard could it have been to get “unauthorized” access when House Intelligence Committee Dems wanted their staffers to have unbounded access? In 2016, they wrote a letter to an appropriations subcommittee seeking funding so their staffers could obtain “Top Secret — Sensitive Compartmented Information” clearances. TS/SCI is the highest-level security classification. Awan family members were working for a number of the letter’s signatories.

Democratic members, of course, would not make such a request without coordination with leadership. Did I mention that the ranking member on the appropriations subcommittee to whom the letter was addressed was Debbie Wasserman Schultz?

Why has the investigation taken so long? Why so little enforcement action until this week? Why, most of all, were Wasserman Schultz and her fellow Democrats so indulgent of the Awans?

The probe began in late 2016. In short order, the Awans clearly knew they were hot numbers. They started arranging the fraudulent credit-union loan in December, and the $283,000 wire transfer occurred on January 18. In early February, House security services informed representatives that the Awans were suspects in a criminal investigation. At some point, investigators found stolen equipment stashed in the Rayburn House Office Building, including a laptop that appears to belong to Wasserman Schultz and that Imran was using. Although the Awans were banned from the Capitol computer network, not only did Wasserman Schultz keep Imran on staff for several additional months, but Meeks retained Alvi until February 28 — five days before she skedaddled to Lahore.

Strange thing about that: On March 5, the FBI (along with the Capitol Police) got to Dulles Airport in time to stop Alvi before she embarked. It was discovered that she was carrying $12,400 in cash. As I pointed out this week, it is a felony to export more than $10,000 in currency from the U.S. without filing a currency transportation report. It seems certain that Alvi did not file one: In connection with her husband’s arrest this week, the FBI submitted to the court a complaint affidavit that describes Alvi’s flight but makes no mention of a currency transportation report. Yet far from making an arrest, agents permitted her to board the plane and leave the country, notwithstanding their stated belief that she has no intention of returning.

Many congressional staffers are convinced that they’d long ago have been in handcuffs if they pulled what the Awans are suspected of. Nevertheless, no arrests were made when the scandal became public in February. For months, Imran has been strolling around the Capitol. In the interim, Wasserman Schultz has been battling investigators: demanding the return of her laptop, invoking a constitutional privilege (under the speech-and-debate clause) to impede agents from searching it, and threatening the Capitol Police with “consequences” if they don’t relent. Only last week, according to Fox News, did she finally signal willingness to drop objections to a scan of the laptop by federal investigators. Her stridency in obstructing the investigation has been jarring.

As evidence has mounted, the scores of Democrats for whom the Awans worked have expressed no alarm. Instead, we’ve heard slanderous suspicions that the investigation is a product of — all together now — “Islamophobia.” But Samina Gilani, the Awan brothers’ stepmother, begs to differ. Gilani complained to Virginia police that the Awans secretly bugged her home and then used the recordings to blackmail her. She averred in court documents that she was pressured to surrender cash she had stored in Pakistan. Imran claimed to be “very powerful” — so powerful he could order her family members kidnapped.

We don’t know if these allegations are true, but they are disturbing. The Awans have had the opportunity to acquire communications and other information that could prove embarrassing, or worse, especially for the pols who hired them. Did the swindling staffers compromise members of Congress? Does blackmail explain why were they able to go unscathed for so long?

And as for that sensitive information, did the Awans send American secrets, along with those hundreds of thousands of American dollars, to Pakistan?

This is no run-of-the-mill bank-fraud case.