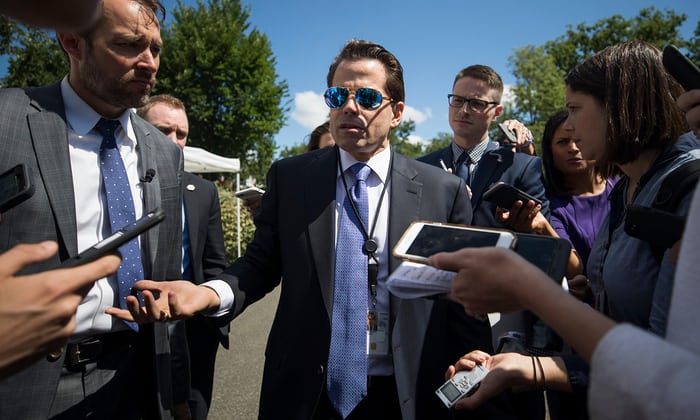 David Smith in Washington
The Guardian

Anthony Scaramucci told an interviewer that Chief of Staff Reince Priebus is “a fucking paranoid schizophrenic” who will be asked to resign, and that Scaramucci is not like Steve Bannon, the chief strategist, because “I’m not trying to suck my own cock”. 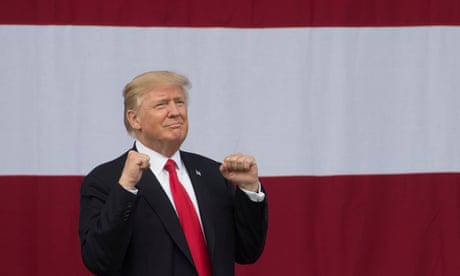 The profane language was shocking even by the standards of the Trump era and suggested that a major staff shake-up is imminent.

New Yorker correspondent Ryan Lizza wrote that Scaramucci called him on Wednesday night, angry that Lizza had tweeted that the communications director was having dinner at the White House with Trump; his wife, Melania; Fox News host Sean Hannity; and former Fox News executive Bill Shine.

“Who leaked that to you?” Scaramucci demanded, according to Lizza’s account. When the journalist refused to disclose his source, Scaramucci allegedly threatened: “What I’m going to do is, I will eliminate everyone in the comms team and we’ll start over.”

I sometimes use colorful language. I will refrain in this arena but not give up the passionate fight for @realDonaldTrump's agenda. #MAGA

He is quoted as saying: “I ask these guys not to leak anything, and they can’t help themselves. You’re an American citizen, this is a major catastrophe for the American country. So I’m asking you as an American patriot to give me a sense of who leaked it.”

According to Lizza, Scaramucci believed the fact that the dinner had been exposed was evidence that his rivals, and Priebus in particular, were conspiring against him. As they discussed the matter further, Lizza writes, Scaramucci “was getting more and more worked up, and he eventually convinced himself that Priebus was my source”.

‘The Mooch’, as he is known, said: “They’ll all be fired by me. I fired one guy the other day. I have three to four people I’ll fire tomorrow. I’ll get to the person who leaked that to you. Reince Priebus – if you want to leak something – he’ll be asked to resign very shortly.” 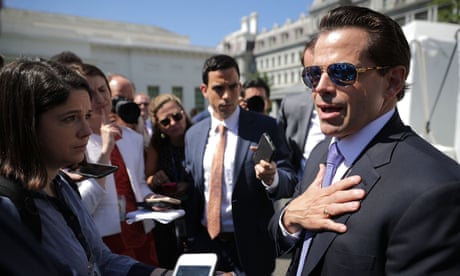 Scaramucci said he told Trump that he expected Priebus to launch a campaign against him, Lizza writes. Scaramucci believed Priebus had been disturbed by the dinner because he was not invited. “Reince is a fucking paranoid schizophrenic, a paranoiac,” he is quoted as saying.

Scaramucci then parodied Priebus: “‘Oh, Bill Shine is coming in. Let me leak the fucking thing and see if I can cock-block these people the way I cock-blocked Scaramucci for six months.’”

Scaramucci has reportedly long blamed Priebus for keeping him out of the White House when Trump took office in January, despite his loyalty to the Trump campaign.

On Thursday night Scaramucci did not apologise, but promised not to use swear words again in his new job. “I sometimes use colorful language,” he tweeted. “I will refrain in this arena but not give up the passionate fight for Donald Trump’s agenda.”

That was followed up by: “I made a mistake in trusting in a reporter. It won’t happen again.”

I made a mistake in trusting in a reporter. It won't happen again.

In an interview with Fox News’ The Story With Martha MacCallum on Thursday, press secretary Sarah Huckabee Sanders said of her boss, “He’s very passionate about the president and the president’s agenda, and I think he may have let that get the best of him in that conversation.”

She added: “We’re focused on the agenda, moving forward, and sometimes, people in the staff get pretty passionate about that. Hopefully, they’ll reel some of their language in. But again, I’m very focused, I know the president’s very focused, and his team is on pushing his agenda forward.” 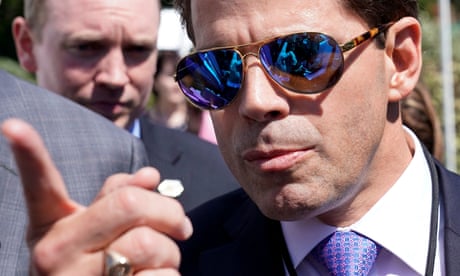 On Wednesday, Scaramucci promised to contact investigators over what he said was an illegal leak of his financial disclosure form. The comment came in a tweet that mentioned the Twitter handle of Priebus. After deleting the tweet, Scaramucci denied that it was a threat to the chief of staff.

Scaramucci told the New Yorker he had called the FBI and justice department and, describing himself in the third person – as Trump sometimes does – he continued: “The swamp will not defeat him. They’re trying to resist me, but it’s not going to work. I’ve done nothing wrong on my financial disclosures, so they’re going to have to go fuck themselves.”

It later became clear that Scaramucci’s financial disclosure form had not in fact been leaked. It was released after a public records request by the Politico website.

Lizza also writes that, despite his recent barrage of TV interviews, Scaramucci told him he has no interest in media attention. “I’m not Steve Bannon, I’m not trying to suck my own cock. I’m not trying to build my own brand off the fucking strength of the president. I’m here to serve the country.”

Both Priebus and Bannon reportedly opposed Scaramucci’s appointment last week as communications director. Trump’s daughter, Ivanka, and son-in-law Jared Kushner are said to have supported it.

Lizza wrote of the astonishing interview: “I got the sense that Scaramucci’s campaign against leakers flows from his intense loyalty to Trump. Unlike other Trump advisers, I’ve never heard him say a bad word about the president. ‘What I want to do is I want to fucking kill all the leakers and I want to get the president’s agenda on track so we can succeed for the American people,’ he told me.

“He cryptically suggested that he had more information about White House aides. ‘OK, the Mooch showed up a week ago,’ he said. ‘This is going to get cleaned up very shortly, OK? Because I nailed these guys. I’ve got digital fingerprints on everything they’ve done through the FBI and the fucking Department of Justice.’”

“This is a White House that has a lot of different perspectives, because the president hires the very best people,” she said. “They’re not always going to agree. There are going to be a lot of different ideas. Unlike previous administrations, this isn’t groupthink. We all come and have a chance to voice those ideas, voice those perspectives, and have a lot of healthy competition. And with that competition you usually get the best results.”

And in a CNN interview, Scaramucci compared his relationship with Priebus to that of brothers who are “rough on each other”. He said: “Some brothers are like Cain and Abel. Other brothers can fight with each other and get along. I don’t know if this is reparable or not, that will be up to the president.”