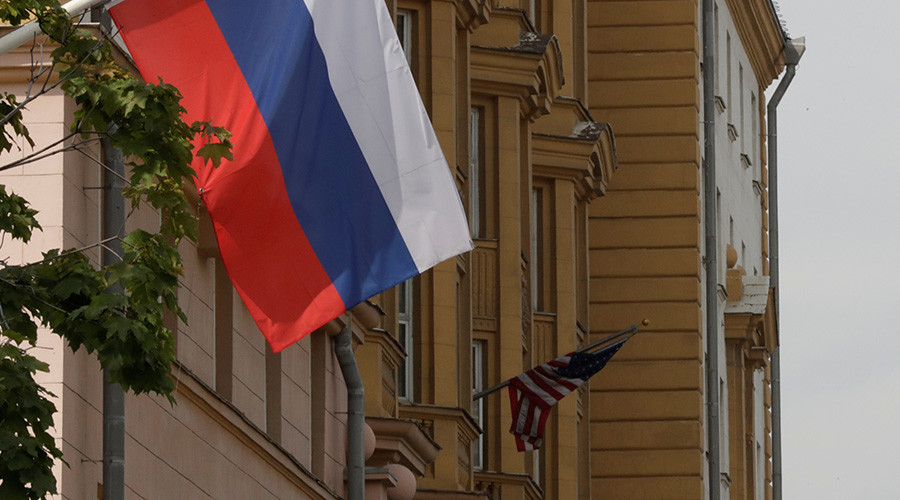 A Russian flag flies in front of the U.S. embassy building in Moscow © Tatyana Makeyeva / Reuters

Moscow is calling on Washington to revise its policy and break “the vicious circle of retaliation,” Russian Deputy Foreign Minister Sergey Ryabkov stated.

The minister’s interview to ABC came out after Moscow decided to reduce the number of US diplomatic staff in Russia and suspend the use of embassy storage facilities.

The move, which was “long overdue” as Ryabkov told ABC, came in retaliation to a new round of sanctions against Russia and the stalemate in the situation with the seizure of Russian diplomatic property and expulsion of its diplomats by the US.

“It was the last drop that made all this happen,” the diplomat said referring to the “completely weird and unacceptable” bill approved by US lawmakers on Tuesday.

The deputy foreign minister called on the US to put an end to the retaliation measures and turn over a new leaf in bilateral relations, which are currently in “a miserable stance.”

“My hope is that this vicious circle of retaliation will not continue. Measures and counter measures shall stop by now,”Ryabkov said.

“Now we should start anew and my call to the counterparts in Washington and also to Ambassador Tefft is to stop now, we should start building a new house, a new construction or a very different type, otherwise everything will be in tatters.”

Elaborating on Moscow’s decision to downsize of the number of US diplomatic corps in Russia to the same number of Russian diplomats in the US, Ryabkov said Russia has waited seven months before resorting to the measure.

“We waited so long, we thought it was sufficient time for decision makers in New York to change their minds, it didn’t happen,” he said, adding that “now we are equals” in terms of diplomatic staff numbers.

However, if Washington turns a deaf ear to Moscow’s plea, there is “a very rich toolbox” in Russia’s disposal, according to the deputy minister. While Ryabkov refused to disclose any exact retaliation steps as it would be “unprofessional,” he assured that “different options are on the table and consideration is being given to all sorts of things both symmetrical or asymmetrical.”

READ MORE: Moscow not ruling out any measures to ‘bring US to its senses’

“So if the US side decides to move towards further deterioration, we will answer, we will respond in kind. We will mirror this, we will retaliate, but my call and my whole point is – don’t do this. It’s to the detriment of the interest of the US and I’m hopeful that even those who are the worst adversaries of Russia in your country, will understand this very simple logic.”

“Every child in the US knows what the words ‘no trespassing on private property’ means. Meanwhile, we saw the US law enforcers just taking completely unacceptable measure on private property that belongs to a foreign state. We can’t have more evidence of a very wrong direction in which political thinking in the US has taken in recent time.”

Prior to Russia’s retaliation measure, a new batch of sanctions targeting its major defense, mining, shipping, and railway industries was recently overwhelmingly approved in the US Senate. The bill is yet to be approved by US President Donald Trump, but Moscow sees little chance that the American leader would veto it.