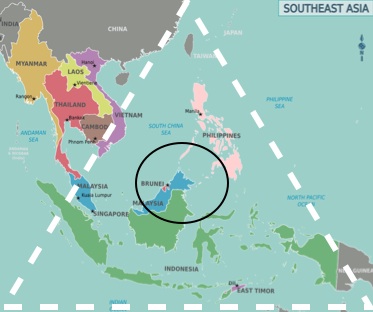 The mystery surrounding the disappearance of the large scale freight and passenger vessels in the Asian waters is concerning experts in the region.  Some fear that the trouble zone will become a place where ships disappear, often without a trace, after six of the top 10 biggest losses took place near Asian countries.According to a report by insurance firm, Allianz subsidiary Global Corporate & Specialty, the waters off southern China, Indochina, Indonesia and the Philippines were the site of a quarter of all losses, German newspaper, WELT reports.
This was followed by the eastern Mediterranean and the Black Sea with 15 per cent and the seas in front of Japan, Korea and North China.Experts said that the main cause of accidents was poor maintenance of the ships or overloading, for example, of passenger ferries.Bad weather, particularly strong storm,s also played a role in the widespread losses. And the lack of security standards along with the lack of enforcement of rules were the main problems, particularly in Asia.  The report showed that the worst casualties from 2016, included the T. S. Taipei which broke in two before it filled with water through a crack in the ship’s door.The captain battled with stormy sea but could not reach the nearest port to save the vessel. Getty – The T. S. Taipei broke in two before it filled with water in March

Meanwhile, the “New Mykonos”, an 81,000 ton ship ran aground in Madagascar in February.It sank after 10 weeks in the middle of May and was the largest ship loss of the past year.Volker Dierks, head of ship insurance at Allianz said: “The fact that the ships are getting bigger and bigger is creating greater risks for shipping and for us as an insurance company.”The insurance firm reported that one of the main issues is that the shipping companies cut corners in order to save money, and often recruit crews with low qualifications and experience.The shipping companies also try to keep the costs low by extending maintenance intervals to the longest allowed deadlines.

Located near to the Japanese coast in the Pacific Ocean is the vile vortex of Dragon’s Triangle or the Devil’s Sea. As the title indicates, the area extends as a triangle between Japan and the Islands of Bonin, including a major portion of the Philippine Sea. Such an infamous reputation for this oceanic area has been not gained contemporarily, but exists for decades and even centuries, if some records are to be believed.

Another synonym for the Dragon’s Triangle is the Pacific Bermuda Triangle on account of it being located in the Pacific Ocean. The area has been in news since several decades for unexplained incidences of vanishing of ships.

Scientifically speaking, the Dragon’s Triangle is said to be one of the world’s 12 existing vile vortices. Vile vortices are those areas where the pull of the planet’s electromagnetic waves is stronger than anywhere else.

Credits: kiwipat/wikipedia.org
Of the other remaining 11 vortices, the Bermuda Triangle is the most prominent one across the globe.

To begin with, the term dragon in the oceanic area’s name originates with the Chinese fable about dragons existing below the water surface and hauling in vessels with seamen to satiate their hunger. These fables have originated well before the AD period – 1000 BC era – in-turn resulting in leaving a huge impact with their emphasis on presence of mythical creatures like dragons.

Realistically, since this part of the oceanic area is full of subsea volcanoes, it has been speculated, debated and discussed that the eruptions from these volcanoes could have initiated and substantiated the premise of dragons sucking in ships and its crew to the ocean’s depths.

Although official documentation about the mystery of Dragon’s Triangle started with the publishing of Charles Berlitz’s account of the oceanic arena in the late 80s, the existence of Ma-no Umi as this area is called in native Japanese has always haunted the Japanese from venturing into this part of the ocean right from centuries past.

It is said that the conqueror Kublai Khan tried to make inroads into Japan in the 1200s but failed to do because of loss of his vessels and crew, the latter being 40,000 men, in this triangular area. Similarly accounts emerge about sighting of a lady sitting in a vessel resembling the traditional Japanese equipment for burning incense in the early 1800s. In the later century, the most prominent and documented reports are that of the Japanese research ship Kaio Maru No.5 about whose’ whereabouts was never heard of again in the early 1950s. This research ship was sent to find about the previously missing war-ships which had been reported to have gone missing without any trace in this oceanic arena in the same period.

And while the Japanese authorities had declared this area to be dangerous for marine voyaging and transporting in the year 1950, following the unprecedented incident of the research ship, all efforts to unearth the facts behind the mystery were aborted completely.

The strongest rebuttal to Mr. Charles’s published work and the belief that the Devil’s Sea is a mythical area abound with paranormal activities, comes from Larry Kusche. His book – The Bermuda Triangle Mystery Solved – published in the year 1995 disclaims Mr. Charles’s documentation of the Japanese war-ships gone missing as mere fishing boats.

In his book, Mr. Kusche has also claimed that the research ship sent by the Japanese contained a crew of only 31 people as opposed to the 100 stated by Mr. Charles and was wrecked instead of disappearing completely. The remains of the wreckage were retrieved by the Japanese a few years ago which further rejected Mr. Charles’s claims.

The Pacific Bermuda Triangle might be subjected to numerous theories and suppositions. But in spite of scientific evidences and the mythical aura surrounding the oceanic arena, its continued existence is testimony that certain powers are far beyond the control of men and their equipments however hard, we might try to prove otherwise.