Even the FED now admits to a crashed job market, negative employment prospects causing epidemic of opioid use Even the FED now admits to a crashed job market, negative employment prospects causing epidemic of opioid use

Widespread opioid abuse is tied to a fall in the share of Americans working or looking for work, the head of the US central bank said on Thursday.

Federal Reserve Chair Janet Yellen said she was not sure if it was a cause of the decline or a symptom revealing more longstanding economic problems.

Technological changes and an ageing workforce also contributed, she said.

This is due to costs related to health care, lost productivity, and criminal activity.

About 91 Americans die every day after overdosing on opioids.

“I do think it is related to a decline in labour force participation among prime-age workers,” Ms Yellen said after a question from Senator Joe Donnelly, a Democrat from Indiana.

“I don’t know if it’s causal or if it’s a symptom of long-running economic maladies.”

Ms Yellen also noted that the US has seen an unusual rise in its death rate.

“It’s obviously a very serious and heartbreaking problem,” she said.

It was Ms Yellen’s second day of testimony before lawmakers, who asked questions about monetary policy, prospects for economic outlook and other issues.

Economists have puzzled over the fall in labour force participation rates, the share of people working or looking for work. 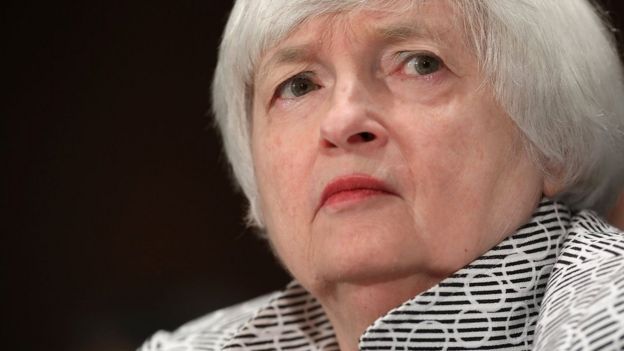 For the over-16 civilian population, they have declined from a peak of about 67% in the late 1990s to less than 63% today, according to the US Bureau of Labor Statistics.

Ms Yellen on Wednesday said she believed an ageing population was a major factor in the overall decline.

She also said men with less education had been particularly affected by technological changes that reduce jobs in some industries.

Some economists also argue that video games are to blame.

Ms Yellen’s remarks came on the same day that top US prosecutor Jeff Sessions announced charges against more than 120 people, including doctors, related to prescription drugs.

The charges were part of a more sweeping crackdown on Medicaid fraud.