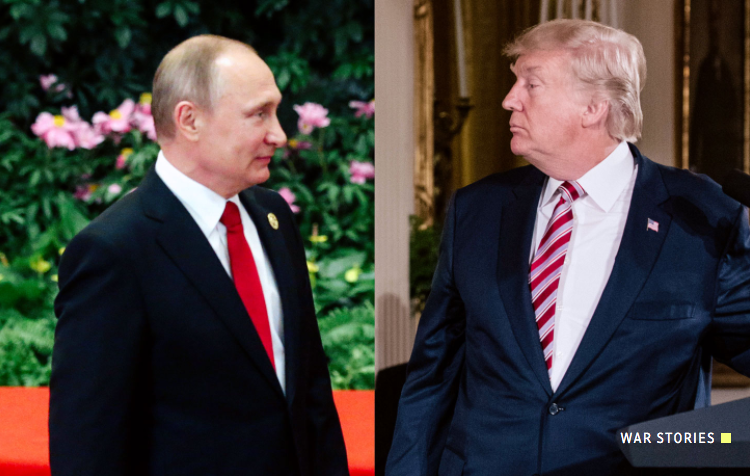 It’s been relatively quiet in the last few weeks on the “the Russians did it, and Trump’s Putin’s best-buddy” propaganda-fest, but it appears the Deep State had three stories tonight – just hours ahead of Trump’s face-to-face with Putin – claim Russian hackers are targeting US nuclear facilities, the Russians are nonchalantly stepping up their spying, and that Russia alone interfered with the US election.

With all eyes on the ‘handshake’ as Putin and Trump come face-to-face for the first time as world leaders, it seems the Deep State is desperately fearful of some rapprochement, crushing the need for NATO, and destroying the excuses for massive, unprecedented military-industrial complex spending.

And so, three stories (2 anonymously sourced and one with no facts behind it) in The New York Times (who recently retracted their “17 intelligence agencies” lie) and CNN (where do we start with these guys? let’s just go with full retraction of an anonymously sourced lie about Scaramucci and Kushner and the Russians) should stir up enough angst to ensure the meeting is at best awkward and at worst a lose-lose for Trump (at least in the eyes of the media).

First off we have the ‘news’ that hackers have reportedly been breaking into computer networks of companies operating United States nuclear power stations, energy facilities and manufacturing plants, according to a new report by The New York Times.

The origins of the hackers are not known. But the report indicated that an “advanced persistent threat” actorwas responsible, which is the language security specialists often use to describe hackers backed by governments.

The two people familiar with the investigation say that, while it is still in its early stages, the hackers’ techniques mimicked those of the organization known to cybersecurity specialists as “Energetic Bear,” the Russian hacking group that researchers have tied to attacks on the energy sector since at least 2012.

And Bloomberg piled on…

The chief suspect is Russia, according to three people familiar with the continuing effort to eject the hackers from the computer networks.

So that’s that 5 people – who know something – suspect it was the Russians that are hacking US nuclear facilities (but there’s no proof).

Next we move to CNN who claim a ‘current and former U.S. intelligence officials’ told them that Russian spies have been stepping up their intelligence gathering efforts in the U.S. since the election, feeling emboldened by the lack of significant U.S. response to Russian election meddling.

“Russians have maintained an aggressive collection posture in the US, and their success in election meddling has not deterred them,” said a former senior intelligence official familiar with Trump administration efforts.

“The concerning point with Russia is the volume of people that are coming to the US. They have a lot more intelligence officers in the US” compared to what they have in other countries, one of the former intelligence officials says.

But, according to Steve Hall, retired CIA chief of operations, the Russians could also be seeking more information on Trump’s administration, which is new and still unpredictable to Moscow

“Whenever there is a deterioration of relations between countries — the espionage and intelligence collection part becomes that much more important as they try to determine the plans and intentions of the adversarial government,”

So that’s more anonymous sourcing about Russian spies… doing what they would normally do during a presidential transition.

And so finally, a third story – with CNN trotting out former Director of National Intelligence James Clapper, to pin the ‘Russians did it’ tail on the “this is why we lost the election” donkey…

Former DNI James Clapper: I think Russia’s goal here is to “prep the battlefield” for the 2018 elections https://t.co/lkEj7yTPQd

Claiming that the Russians alone were responsible for interference…

“As far as others doing this, well that’s new to me,” Clapper, who served under former President Barack Obama, said during an interview on CNN’s “The Situation Room.”

“We saw no evidence whatsoever that [there] was anyone involved in this other than the Russians,” he said.

Clapper’s comments draw a contrast from Trump, who declined earlier Thursday to single out Russia for interference in the 2016 White House race.

So in summary – 3 stories pinning Russia for shameful acts against ‘Murica that just happen to hit hours before Trump shakes hands with Putin… ensuring that unless Trump slams Putin to the ground like a wrestling-CNN-logo, he will be adjudged as being soft… and therefore clearly in cahoots with the Russian leader. Seriously, do the Deep State realy think Americans are that dumb? (rhetorical question)