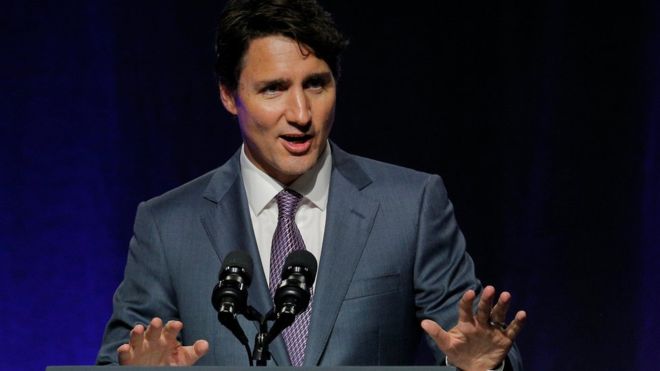 Prime Minister Justin Trudeau has told governors from across the US to ditch the “America First” motto.

His National Governors’ Association speech in Rhode Island on Friday was a first for a Canadian prime minister.

In his speech, Mr Trudeau urged US governors to embrace their neighbour to the north and avoid protectionism.

It is all a part of his aggressive strategy to promote a “thinner border” ahead of vital trade talks with the US renegotiating the Nafta treaty.

President Donald Trump has made “America First” his mantra, shaping his policies on trade and immigration.

But Mr Trudeau, who is a fierce advocate of free trade, told the governors protectionist policies “kill growth”.

“And that hurts the very workers these measures are nominally intended to protect. Once we travel down that road, it can quickly become a cycle of tit-for-tat, a race to the bottom, where all sides lose,” Mr Trudeau said.

“If anything, we would like a thinner border, not a thicker one.”

Earlier in the day, Mr Trudeau had talks with governors from Wisconsin, Kentucky, Rhode Island and Iowa.

Nafta is a controversial trade deal between US, Mexico and Canada, which Mr Trump has threatened to rip up because he said it is unfair to the US.

With Nafta renegotiations set to begin in August, Canada must use whatever time is left to convince leaders that bilateral trade between the two countries must be a priority. 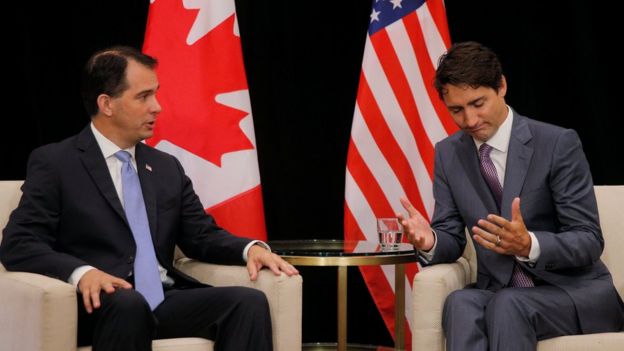 “This is a big, high stake negotiation,” she said. “I do not think he wants to leave any stone unturned, he has got to try everything.

“We do not really know who is going to be the most influential, which thing will be the turning point, and what is going to resonate with people, so they have got to try everything and hope that it comes out well in the end.”

At the governors meeting, Mr Trudeau said “Nafta isn’t perfect” but that states should urge the federal government to fix it, instead of scrapping it all together.

“More trade barriers, more local continent provisions… does not help working families over the long term, nor the mid term.”

Historically, trade between the two nations has been hashed out by the respective countries’ cabinet ministers, Ms Greenwood said.

But over the past several months, Canada has sent everyone from cabinet ministers to provincial premiers to the mayor of Toronto to plead its case.

“The level of intensity is new,” Ms Greenwood said. “I think that is utterly unprecedented, and entirely appropriate [given the circumstances].”